He's a world record holding sprinter from South Africa. She's a spunky 8-year-old from Essex, England. In an inspiring series of images that have recently gone viral, the two strangers, united only by a stubborn refusal to let double amputations stop them, race each other in a friendly bionic foot race.

Oscar "Blade Runner" Pistorious, 25, was just 11 months old when doctors discovered he had no fibulas, requiring below-the-knee amputations of both his legs. Ellie May Challis lost both her hands and legs at 16 months, after contracting a severe case of meningitis.

Although Ellie was originally fitted with standard prosthetics, the toddler found them difficult to walk with. More sophisticated carbon fiber legs -- the kind worn by Pistorious -- were expensive, but Ellie's community rallied behind her, raising the $15,000 needed for the replacements. In 2009, the 5-year-old became the youngest person ever to be fitted with carbon fiber prostheses.

Held at an indoor track in Enfield, North London, little Ellie actually bested the champion sprinter in all four of their 15-meter races, to the cheers of her twin sister Sophie, and older siblings Taila and Connor.

In a historic announcement, Pistorious, who runs using special Cheetah Flex Foot limbs, was granted permission to race in the London 2012 Olympic Games, reversing a ban by the Court of Arbitration for Sport. The International Association of Athletics had ruled Pistorious could not compete in the games because his Flex Foot limbs represented an unfair advantage. However, the Court reviewed evidence from two new (and conflicting) studies before making its ruling in favor of Pistorious.

Pistorious qualified for the semifinal heat of the 400 meter race on Sunday, but failed to qualify for the finals. His time, 46.54 seconds, was two seconds slower than the heat's winner, reigning world champion Kirani James of Grenada. In a show of respect and sportsmanship, James embraced Pistorious after the race and asked to exchange bib numbers.

For his part, in an interview on the TODAY show, Pistorious said he will cherish his Olympic memories for "the rest of [his] life." As his 89-year-old grandmother watched from the stands, Pistorious said, "Hearing the roar of the crowd and knowing that there were so many people behind me just made it that much more enjoyable."

Check out more adorable photos of Ellie and Oscar Pistorius below: 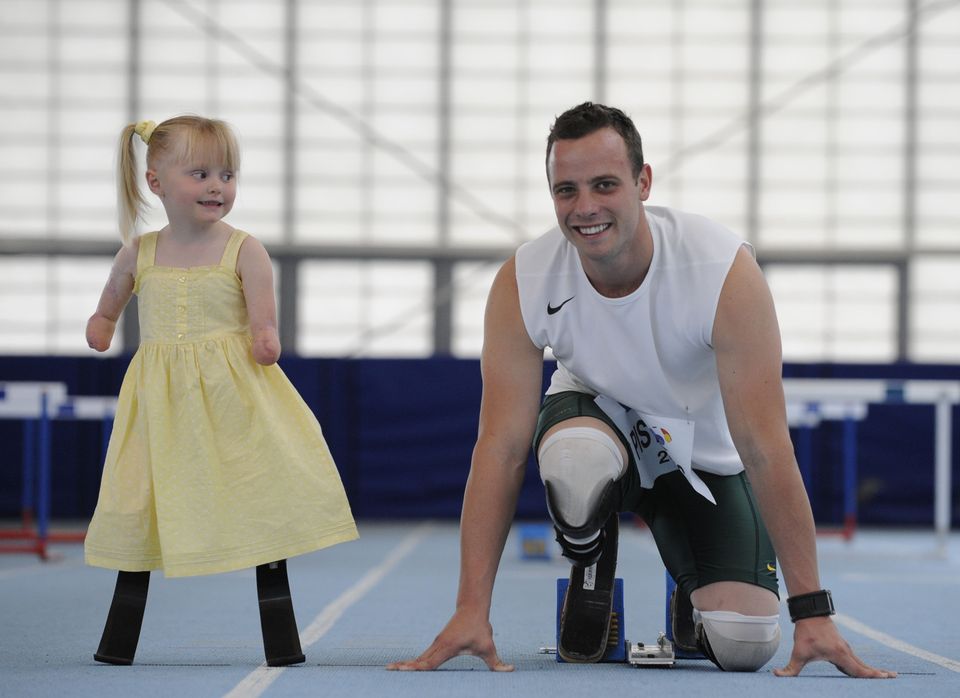 1 / 3
Oscar Pistorius and Ellie
He has been called the fastest man on no legs. But Oscar 'Blade Runner' Pistorius got a run for his money when five-year-old Ellie Challis challenged him to a race on their bionic feet. Paralympian Pistorius, world record holder for double amputees at 100, 200 and 400 metres, may have made some allowance for age and the fact that Ellie's blades were fitted only last month. But she had clearly learned quicker than he bargained for Ellie crossed the line first in all four of their 15-metre races. The youngster, from Little Clacton, Essex, lost her hands and lower legs after contracting meningitis at 16 months.
Andy Hooper, Daily Mail / Zuma