Rosen: Well, Mike, Oscar season -- which started when "Argo" premiered at the Telluride Film Festival last August -- is finally, mercifully over. We've talked about awards season every which way but loose over the last six months, and while I hesitate to say it was a profound learning experience, our foray into the murky waters of Oscar chatter was enlightening. Not from an outcome standpoint, of course -- pause here for me to bow to your Oscar picking expertise; you crushed me over at GoldDerby.com, which puts you in league with every other Oscar pundit, since I finished tied for last with Jeff Wells -- but from an observational one.

This might sound like naive, Pollyanna nonsense, but some real-talk: 2012 was a fabulous year of movies, the type that should remind everyone why we love this bloated industry in the first place. Yet by the time "Argo" -- a film with both critical and audience approval, p.s. -- was announced as Best Picture by Michelle Obama, it's win was called a travesty. No, really: That's what Awards Daily writer Sasha Stone said, both on Sunday night and at multiple times during the last month, when it became apparent that "Argo" was winning. (For what it's worth, "Argo" did have the lowest number of total Oscar wins for a Best Picture since "Crash," but there is little other comparison to be made in the films respective qualities.) That's fine: Stone didn't like "Argo" ... except for the fact that she loved it. Her October 2012 review called "Argo" a "great f--king movie." By Thanksgiving of last year, "Argo" was "crushingly good." Stone has said her issue with "Argo" stems more from the fact that other movies, like her beloved "Lincoln," were better, and thus more deserving of Best Picture. Fair enough. But taking umbrage with a "great f--king movie" winning the top Oscar prize feels like wasted energy at best, foolishness at worst.

That's the problem with Oscar season. The pundits -- us, at times, included -- got so wrapped up in being pundits that they forgot the great movies we saw this year. "Argo" is a great movie. So is "Lincoln." So is "Zero Dark Thirty." So is "Silver Linings Playbook." So is "Life of Pi." So is "Django Unchained." Any one of those films could have won Best Picture and I would have been satisfied; "Argo," my least favorite of that group, did win Best Picture, and I'm still satisfied. Top to bottom, the 2013 Best Picture nominees were a special group. (Compare these films to the barren wasteland of last year, when "War Horse" and "Extremely Loud and Incredibly Close" were Best Picture nominees, and it almost makes the 2012 Oscars look like a practical joke.) We'll look back on this crop of films and performances in five years and wonder how we got so lucky. Or I hope we will. At the very least, I will. I never want to be upset that a "great f--king movie" won Best Picture.

Hogan: Hey, Chris -- yes, Oscar season is all over. Or at least it's all over but for the griping about Seth MacFarlane's boob jokes. I'm one of those straight males the show was presumably targeting, and though I'll admit I laughed at a few of its more tasteless moments, I was bummed out by the frat-house invasion of a broadcast that traditionally appeals to demographics with better hygiene and less back hair. Even the inclusion of Captain Kirk felt like a needlessly geeky gimmick for what I sometimes think of as Hollywood's last refuge from superheroes.

But maybe I'm kidding myself. Mystique and Catwoman took Best Actress and Best Supporting Actress on Sunday night, after all, and who can forget those bickering Avengers? Moreover, at the Governors Ball immediately following the show, Tommy Lee Jones himself told me he liked the Captain Kirk bit, because it gave the audience permission to loosen up and laugh.

Speaking of the post-party circuit, since I happened to witness a slice of it: the famously exclusive Vanity Fair party was reportedly packed during the 11:00 hour, and it's not because they started letting punters in. As you indicated, there were nine great Best Picture nominees on Sunday night, representing five major studios and three indie divisions, and almost all of them took home at least an award or two. That left a lot of insiders with at least something to celebrate.

The impressive ratings from Sunday night's broadcast are another indicator of 2012's quality: with six Best Picture contenders boasting box-office totals of more than $100 million and quite a few well beyond that, this was one occasion when the general public actually had good reason to care who won what.

And while we're limning silver linings, can we talk about those singing divas? There was something almost bipolar about the broadcast: clunky tit jokes in one corner and then these high-camp musical moments featuring fierce, force-of-nature females. Adele, Shirley Bassey, Jennifer Hudson, Barbra Streisand -- every one of them got honest-to-god applause in the hotel lobby where I watched the show. And I didn't even mention Michelle Obama, whom Harvey Weinstein wrangled to award Best Picture, raising the question of how the heck the Academy will ever outdo itself next year.

If I'm honest, I wish Amy Pohler and Tina Fey had hosted the Oscars this year. A crop of films this strong deserved better than "Family Guy" lite. But you're right, Chris, now is the time to count our blessings: we had if not front-row than mid-orchestra seats to a race that should go down in history as a high point of quality. And we don't have to write another one of these columns until September!

The Oscars Movies For Your Consideration Argo Seth Macfarlane Oscars

Oscar Season Is Finally Over: For Your Consideration
Oscar 2013 After Party 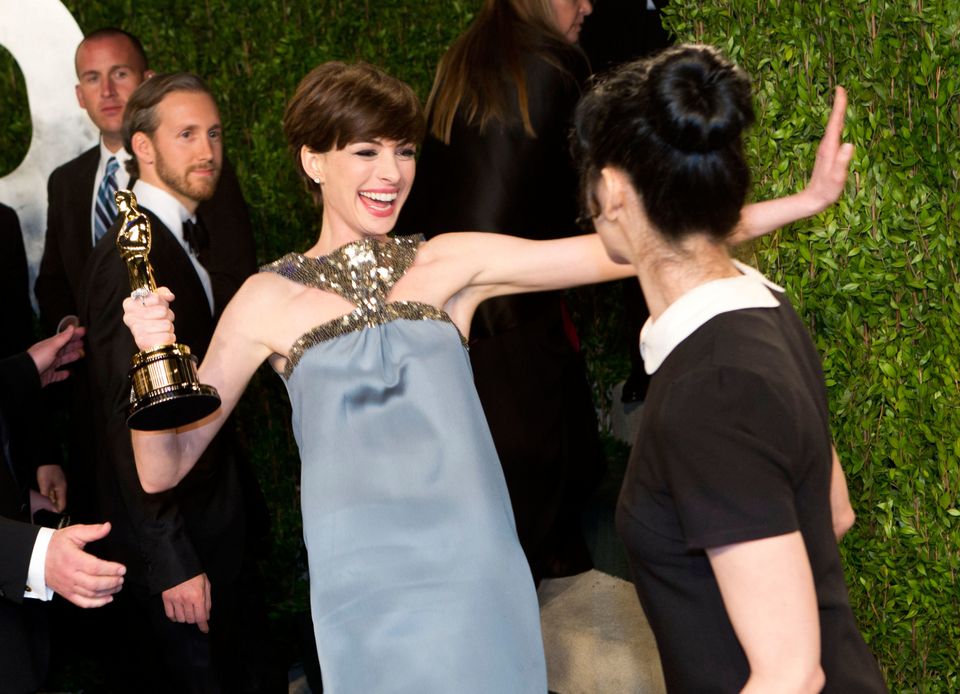