I went to bed last night totally sure what today's lead would be:

"What a difference one year makes," I wrote in my draft. I went on:

Last February, I posted a piece on Huffington Post ("Oscars 2012: Where Are the Women?") about how the absence of women on Congressman Daryl Issa's infamous panel on Birth Control funding found a parallel in the lack of women nominated for Oscars in Directing and Screenwriting categories. But today, Kathryn Bigelow was nominated for her second Best Director Oscar, which creates an ironic confluence: for the first time in history the ratio of female Best Director candidates (1/ 5 = 20%) is equal to the ratio of female Senators (20/100 = 20%). And although I know it's dangerous to make very big claims based on very small numbers, I do think there is something to celebrate here.

Well, I was totally wrong. And I am still stunned. And I am certainly not celebrating today.

As it happens, they were wrong too. In spite of all the controversy, Zero Dark Thirty was nominated for Best Picture. And Mark Boal, the screenwriter who wrote the now-infamous torture scenes, was nominated in the Best Original Screenplay category. And Jessica Chastain, the actress who plays a participant in several torture scenes, was nominated in the Best Actress category. So it seems the only individual successfully swiftboated this year was director Kathryn Bigelow. And therefore, for the 80th time in 84 years, all the Best Director nominees in 2013 are male.

In my own defense, however, I did insert a note of caution in an otherwise very positive review of Zero Dark Thirty: "While I don't deny the visceral force of the CIA torture scenes at the beginning, or the SEAL assault scenes at the end, I worry that Bigelow is buying her box office at the cost of her message."

At the time, I meant this as a criticism. From my point of view, the climatic assault on Abbottabad goes on way too long. So in my review, I was implying that Bigelow had padded her ending (in which the character played by Jessica Chastain has no active role) so male viewers could have the thrill of participating in cornering Bin Laden and seeing him "get blasted." Why else would she have included all the gory details (women screaming, children cowering, babies crying), when we all enter the theatre already knowing that's how the Bin Laden story will end?

But now I see that Bigelow's male viewers were not so easily fooled. Zero Dark Thirty is a story about a very strong woman; "a physically tiny figure who faces off against men much bigger than she is... and every time, she prevails." Is it too bold to suggest that the aspects of Zero Dark Thirty that I loved the most are the very same things male viewers rejected?

Tomorrow, I will follow-up with a detailed analysis of Zero Dark Thirty, specifically addressing what I consider to be the faux torture controversy.

Today, I will end by reminding you who to thank for today's list:

A Los Angeles Times study [published on 2/19/12] found that academy voters are markedly less diverse than the moviegoing public, and even more monolithic than many in the film industry may suspect. Oscar voters are nearly 94% Caucasian and 77% male... Oscar voters have a median age of 62... People younger than 50 constitute just 14% of the membership.

Knowing all this, is it really any wonder that today's big winner, with 12 nominations, was Lincoln? 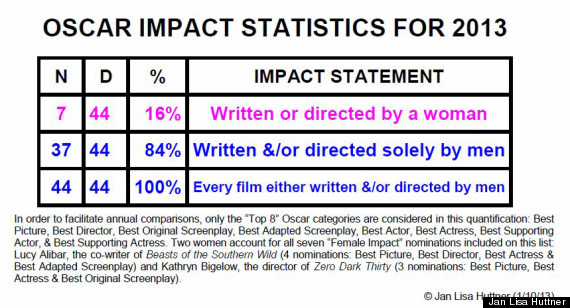 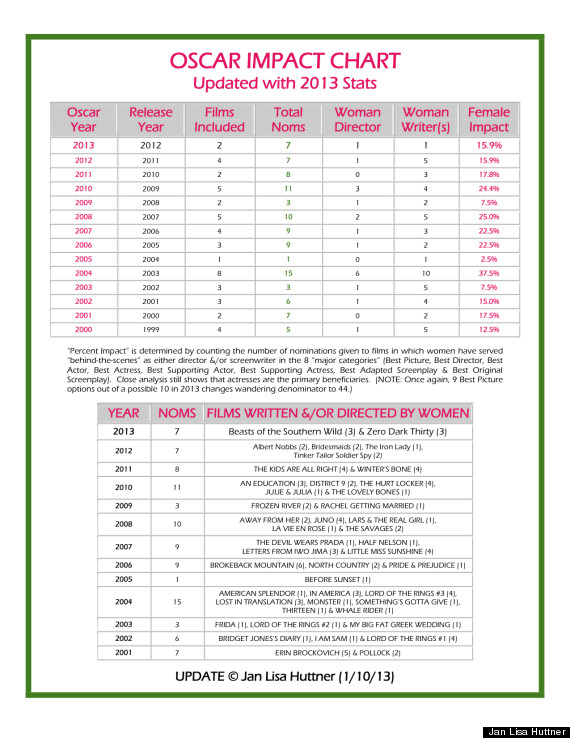 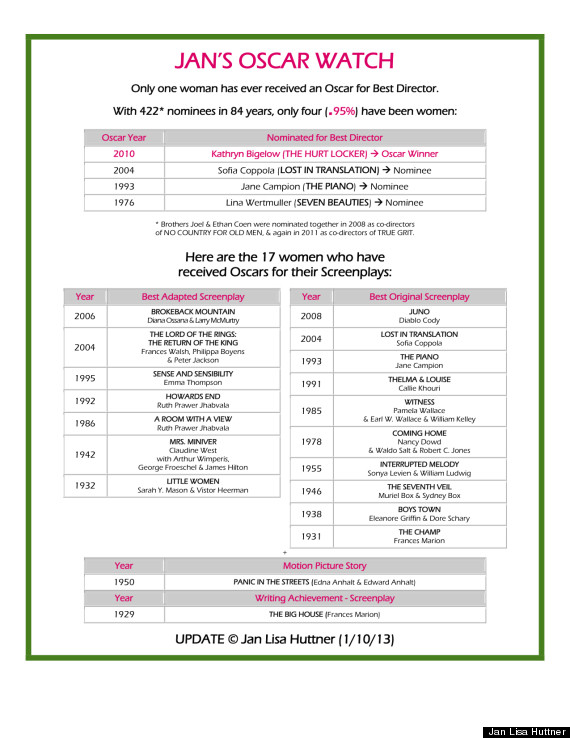 Jan Lisa Huttner is a Brooklyn-based film critic and award-winning Feminist activist. She blogs at www.TheHotPinkPen.com, and her book "Penny's Picks: 50 Movies by Women Filmmakers" is available from Amazon as a paperback and on Kindle.