From smear email campaigns and hectoring rally audiences to hateful YouTubes and candidate equivocations, slurs against Muslims and Arabs have become increasingly prevalent this election season. Yet this culturally toxic component of the campaigns has only fully entered the mainstream over the last couple of weeks, being covered at major media outlets and addressed openly by the candidates themselves.

OffTheBus writers have gone out into their communities and interviewed people about how this hate speech has affected them and their view of the candidates. They have asked Muslim Americans and Arab Americans if they feel targeted, and what they would like to see the next administration do to combat this form of bigotry in the U.S. 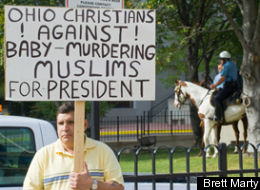 "Hani Bawardi, a professor at University of Michigan-Dearborn who studies Arab Americans, remains cynical about the impact of the Arab American vote in part because of such divisions. He said Arab Americans also are not well organized, and they tend to engage in local politics rather than in national elections. He added that he does not expect Obama or McCain to publicly seek Arab support on radio or television stations.

'No (presidential candidate) would say that they think Arab Americans are upstanding citizens and that they want their vote,' Bawardi said."

--Arab American Community Shifting to Democrats, Not Targeted by Either Campaign by Jonathan Partridge

"West, who was born into his Islamic faith, says the Arab slur is a cover for their true beliefs.

'It's no longer politically palatable for people to openly admit that they don't favor a candidate because of his skin color. [African Americans] have gone through a long hard battle in this country to win the right of dignity and respect, at least in the public square.'

West attributes the veiled use of the word, Arab or Muslim, as a code word for "other" or an even more derogatory word used against Black people.

'It's more convenient and less controversial for someone to call Obama a Muslim then it would be to call him the n-word.' That's how the coding works."

" 'I am almost sure Obama will get assassinated if he becomes president. What gets to me is that what people think is simply untrue. Oh Gosh. Stupid people, at least know what you are talking about; he is not Muslim neither Arab. Also, being black does not mean he will oppress whites ... So there you have it, the most powerful nation in the world is still full of hatred, injustice, and racism. It was hidden, but now it slowly is coming out. Scary.' "

"The left has cried foul over the use of Obama's full name, while the right has attempted to use it as a fear-inducer. My question is, when are we -- as progressives and liberals -- going to stop pandering to the obvious racism of others and stand up in defense of our candidate's full name? When are we going to feel strong enough in numbers, and fortified enough in our own anti-racist beliefs, to say that there is nothing wrong with the name Hussein, or any name, of any origin? When are we going to be able to say Barack Obama's full name with pride, and not with trepidation?"

--We Should Embrace Obama's Middle Name by Jane Devin

"Obama has on occasion said that it shouldn't matter if he were Muslim or not. But he has not done that enough. Usually, he just denies it, as if being called Muslim were an accusation. Wouldn't someone who wants to run on a mantle of hope and bring this country forward on race relations say over and over again, 'There is nothing wrong with being Muslim. Muslims have the right to run for office. Muslims are not all terrorists.'?"

--Is Muslim The New Queer? by Hanna Ingber Win

"The highly charged rhetoric used by McCain and Palin to tie Obama to terrorism and Islam is once again an affront to all Muslim Americans. We saw this type of fear and backlash just after 9/11. We see it also in the McCarthy-like invocations of Michele Bachmann. I challenge Michele Bachmann and Sarah Palin to tell this grieving mother that her son is anti-American because of his faith.

The answer to who is evil is NEVER as neat, clean, and easy as a label. Thank you, Colin Powell, for reminding America that those who serve in our military represent the awesome diversity of faithful and patriotic Americans."

" 'I find the growing vitriolic anti-Muslim heckling that has found its way into the presidential campaign deeply troubling. It speaks to efforts by certain right wing elements of society that take advantage of the ignorance of the large segment of the American public that know little of the of Islam except the sensational headlines depicting violence by radicals that act under the guise of the religion, to paint the entire religion with a broad demonic brush.' "

"Past interviews show Senator McCain is not likely to speak up for his fellow Muslim Americans as he seems to prefer Christians in positions of leadership. In a 2007 interview posted on the New York Times, McCain indicated he felt a Christian president would be better choice because this nation was found on Christian principles according to the New York Times he said, " the Constitution established the United States as a Christian nation and that his faith is probably of better spiritual guidance than that of a Muslim candidate for president." So is he saying a Jewish, Hindu or Atheist President would also be bad off hand because they are not Christian? I don't know but it clearly seems we cannot count on Senator McCain to do the right thing and champion the cause of Muslim Americans."
--Next President Must Show Support For Muslim Americans by Paula Mays