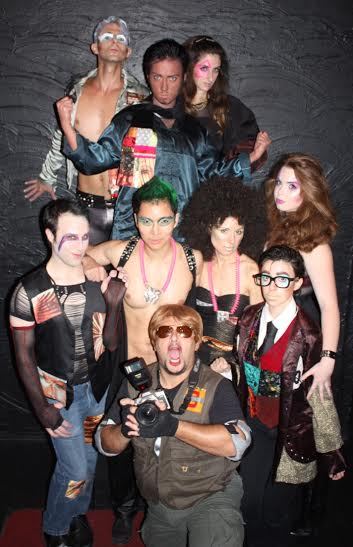 In their latest offering, an outrageously entertaining adaptation of Othello, the company reinvents Shakespeare's tragedy as a fast-paced fashion extravaganza, replete with paparazzi, burlesque queens and a cross-dressing Othello in blackface, all set to the pounding beat of techno-rock and sentimental musical theater tunes. The humor is over-the-top crude and rude, and the characters are in-your-face denizens straight out of a Fellini movie or a Brecht play. But at its heart, this adaptation of Othello is more truthful than the endless pseudo-interpretations of Shakespeare set in fascist Italy or corporate America.

What Zombie Joe's production does is highlight, amidst the circuslike anarchy of human existence, the beautiful, twisted role of love. In this Othello, love is crude, pornographic and violent, but also sweet and delicate. Othello's killing of Desdemona, rather than focusing on the tragedy of deceit and jealousy, points at the destructive power of obsessional love and lust. This is the beating heart of Shakespeare's tragedy, beyond the pretty phrases and the deadening reverence for the Bard's work. One can be sure that Shakespeare would have loved this production, which not only pricks at the funnybone of our low-brow instincts, but also soars in its levels of intellectual resonance.

The actors in this company eschew any naturalistic style of acting, and go right back to the commedia del'arte of the Italian Renaissance - or perhaps the Greeks - to declaim their words, both as lyric poetry and as crude humor. Vincent Cusimano as Iago epitomizes this smash-mouth style, chewing up the scenery as a raging, lustful devourer of men, at the same time displaying a vulnerability that reminds us again and again of Shakespeare's complex and terrifying view of love. Vanessa Cate as Othello explores, in a quieter, more internal performance, the pain and power of love, bursting out of the cage of emotions in a final rendition of "What I Did for Love."

There are lots of fine performances here, including Tyler Koster, Kirsten Benjamin, Sebastian Munoz and Quinn Knox, who probably holds the record with Cusimano for the longest stage kiss on record. Josh T. Ryan, who adapted the play with Zombie Joe, does a masterful job directing the hour-long show. Kudos also to Kevin Van Cott and Ryan, who conceived the fabulous score, as well as Natalie Hyde for imaginative makeup and Jeri Batzdorff for wonderful costume design. Another triumph for Zombie Joe and company!