When Jon Robin Baitz's searing family drama Other Desert Cities premiered at Lincoln Center in January 2011, it took the town by storm. Not since August: Osage County can I recall an American play that's had such buzz, with the New York Times calling it "the best new play on Broadway."

And, like most good dramas, it presents a formidable challenge early on that requires the characters to reexamine their own moral code before making a life-changing decision. And in this case, we have an upper-class, republican family that's rocked to the core when their novelist daughter returns home after a six year absence to announce her latest effort: a tell-all memoir on the family, with no skeleton left spared, no sacred secret left untold.

I had the chance to speak with Tracy Michelle Arnold, who plays Brooke Wyeth, the strong-willed daughter who refuses to back down from her artistic vision, despite protests from her formidable mother Polly (played by Tony Winner Deanna Dunagan), in Goodman Theatre's production, set to begin performances on January 12. Highlights from that discussion follow:

Now, you're only, what, a few days into rehearsal?
A week and a day!

Ah, so I'm sure you're still trying to figure out who Brooke is -- what makes her tick.
I am, so this interview makes me particularly nervous!

Ha, well, let's start here: Brooke creates some rather significant drama by revealing she's publishing a tall-all memoir. Have you, Tracy, gotten in trouble for publishing secrets?
Well, when I was a little girl, I wrote a diary about a boy I really liked -- that was pretty revealing. But then I decided it was wise to destroy it, so I glued all the pages together.

Probably a wise move. Now, when I read the play this weekend, I wasn't sure I really liked Brooke -- so stubborn and selfish! Or, was it passion and commitment? It was hard to decide. What was your take?
Well, Bob, I have to tell you: When I first read the play, I wasn't sure how to feel about her, either. But, now that I've been working with the role, and in my duty as an actor, I have to have her back -- believe in her. And I'm getting to understand her point of view -- why she felt compelled to write this book, to tell this story. She spent her life living under a label as a daughter, a sister, a writer of a certain type of novel. But now she's trying to get out from under that label, and make some rather late-life choices, and it's scary for her, but also quite necessary.

I was also amazed by how, as different as each character in this play is, you completely understood where they're coming from. You could easily put yourself in their shoes.
Yes! Listen: There hasn't been one day since we began rehearsal where someone hasn't stopped and said, "Man, this is good writing." Jon [Robin Baitz] is an exceptional writer, and this is so rare. He's excellent at writing complex people -- no one is good or bad, everyone has flaws -- and everyone is articulate.

What's it like sparring with Tony Winner Deanna Dunagan?
Oh, I love it! We've actually sparred before in The Chalk Garden [at Northlight Theatre in Skokie in 2006), so we're having a great time reconnecting. Deanna's Polly is very much a southern lady. Gentile and lovely and kind -- and strong.

After seeing this play, what do you think -- or hope -- audience members will leave talking about?
Nothing is as simple as what meets the eye. Regardless of your political affiliation, your moral views, your sense of values, you will connect with each character in this play. And you will be challenged to take the opinions you have on these characters and recast them. I mean, without giving anything away, I literally gasped when I first read the play. If anything, this experience has given me a new perspective on first impressions. 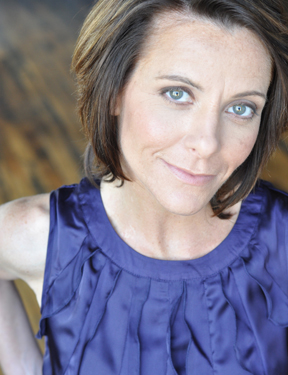