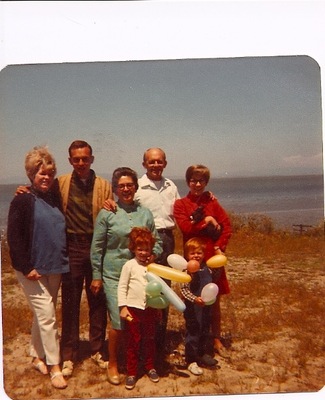 When we were a family

Every year I've struggled with my emotions on Mother's Day. My own children have been fairly hit or miss in recognizing the day: from breakfasts in bed that, while not always edible, were priceless in their adorable orchestration, to thoughtful cards and gestures, to forgetting the day all together. As I get older, the misses mean much less, the hits so much more. But it hasn't been in my role as mother that I've felt the lump in my throat and the knot in my gut; it's in my role as a daughter. Until one month ago, I never knew why.

My mother has been dead for three years now. She died of Huntington's Disease on New Year's Eve 2011. At the time I was relieved to see her suffering end, but this Mother's Day, I find myself grappling with much more complex feelings, and a sense of relief in knowing that I won't have to celebrate this day with her. Perhaps that last line just shocked you? I can see how it might. But then, you probably have a mother you love. I've shocked you again.

One month ago, I learned the truth about my mother. I'm a 52-year-old woman and I feel like I'm just waking up. It hasn't been easy; in fact the past few weeks have been truly brutal at times -- but they have also been freeing. I have long acknowledged that much of my childhood was painful and challenging. My mother was a broken woman long before Huntington's claimed her. I feel enormous compassion for the abuse she suffered as a child, and the hardships she faced throughout her life -- even the ones she brought upon herself. Life is much harder when you start out with as many scars as she had. As her daughter and as another woman, I have always felt a great sadness for her. I did my best to forgive many things and before she died, I know she felt that. I loved her, in my own broken way.

However, she was not a good mother, and from that brokenness she inflicted many of the same hardships on me (I won't speak for my siblings). I generally write honestly, without filters: I must filter this. The truth I learned serves no one else reading this, but my journey has lessons that are worth sharing.

I blocked the truth out, something that has been almost as dizzying as the truths I'm now digesting. As children, we do that sometimes when reality simply hurts too much. However, hearing the truth for the first time I felt both horror ... and then a peace descend on me, knowing that all those years, that knot in my gut was there for a reason.

Mom loved being a Grammy

Mom struggled in her role as mother, and while I'm still grieving the loss of stories I clung to to make things less painful, I also feel a deep sense of relief in knowing that I wasn't crazy all those times I felt lost and confused. The struggle wasn't about me; I just believe that, because I was too young to know any better. My husband has gently pointed out that she did change later in life; she was a good grandmother; she did her best. I know he's right. I've always understood that fact, but it feels bitter in my mouth right now. I reserve the right to feel what I feel right now, and work on forgiveness.

I was loved deeply by others, and that is the memory I've recovered. It was there all along, but I was afraid to believe in it, because my mother's stories never pointed me in that direction. I believed whatever story fit, to avoid feeling abandoned. While others cringe that a child who has been horribly assaulted would still want to be with the offending parent, I've always understood that desperate need to fix it and hope things get better. I clung too. *For the record: I was not assaulted by my parents, but the role of trauma in my childhood served the same end.

After my father died in car accident, when I was ten and a half, I had very little contact with his family: my grandmother, great-grandmother, two aunts (his sisters) and countless great aunts, cousins, etc. -- all of whom had been an integral part of my early childhood, prior to my mother taking me and my siblings back east, without my father's permission or knowledge. Our world was suddenly filled with new aunts and uncles, new relatives, who we hadn't known before, having grown up far away. They loved us; there were happy times with there as well. Over the years I tried to bury the hurt I felt in losing my other family. I believed my father had let us go; I believed he didn't really want us, and over time I came to believe that those aunts and uncles, grandparents and cousins, all found other children to love. I imagined they had moved on, and we were not worth the effort. I was not worth the effort. 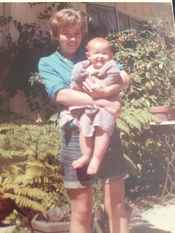 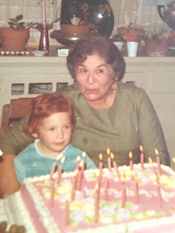 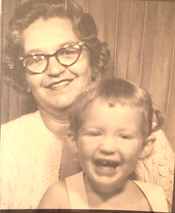 (My Aunt, my great-grandmother, my grandmother... they loved me) 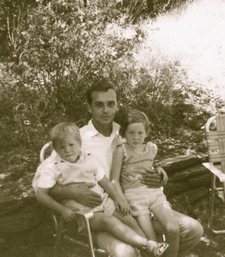 My father loved us, and he lost us.

The reality was very different, and after high school, my paternal aunts and great grandmother reached out to me, and sent me an airline ticket to visit them. By then, my father and grandmother were dead, and I'd grown up with another family who I loved. I saw my dad's family as strangers who I wanted to know, but who I felt guarded with and unsure of. It was a wonderful summer, and we all made more effort over the years to reconnect -- but in the back of my mind, my mother's stories kept me from fully embracing their love; I remained wary and careful, protective of my mother, who had long told me reasons to feel that way. I remained a scared kid, afraid to anger or push her away, by embracing this other family. I stayed in touch with them, but there was always the invisible wall I'd built, that kept me from being closer to them.

When we moved to Washington State, 15 years ago, I began to forge a stronger relationship with my father's sister, my aunt Cokie -- who lives only two hours from us. By then my mother was ill with Huntington's and we were all careful in what we said about the past, building new ties and bonds. I thrived in my aunt's affection; my children adored her, often telling me that she was like another grandmother -- one who took them hunting for beach treasures, made cookies with them, and beamed every time they were with her. I have loved her for all the same reasons, but my child's heart held just a bit of that old wariness and fear that I'd betray my mother, or alienate my aunt. Having grown up with fear and anxiety -- always afraid I'd alienate my mother; I assumed that's how it worked with everyone.

My aunt, however, has taught me that love doesn't hurt. Over and over she has shown me that no matter what I do, whether she agrees with me or doesn't, one thing is constant: she loves me. In learning a painful truth, a month ago, I also learned that that her love and the love of all those relatives who lost us, was always there. They held it in a safe place, just been waiting for me to let my guard down and fully accept it. When the wall came down, I felt free to finally acknowledge my mother's love was something that held me back. It came with conditions and toxic edges. I exhaled deeply when I realized that somewhere inside, I'd always known there was another love ... and that I was deserving of it.

My aunt Cokie has become the matriarch of our family. She will blush when she reads that. I make her laugh with bold assertions and my unfiltered way of saying things. I love her laughter; I bask in its glow. She is a doting grandmother to her five grandchildren; she adores them. She is close with both of her children, my cousins. We all have our issues with our parents, nothing is perfect -- but from a distance, I always knew that my cousins were very lucky. My aunt has also embraced me and my kids, my sister and her daughter, and my brother's children. She and her sister, my aunt Pat, have been a vital connection to my father. My aunt has let us know that we are loved, with no strings and no judgment. She is the kind of mother I wish I was and wish I had, but I'm grateful she's my aunt. I aspire to be that kind of aunt to my nieces and nephews.

In my darkest time, five years ago, when I believed I couldn't cope anymore, she was the one who pulled me up, and told me: "You are from strong stock." Those words have made all the difference. They are my daily mantra. They are the words I want my own children to know.

Not everyone grows up with the kind of mother that Hallmark celebrates. I have spent a lifetime struggling to pick out the right card -- knowing it doesn't really exist. There are countless people who have struggled with these same feelings, many having had much harder lives than me. But if we are open, there are other mothers among us. They come in the form of friends, in the form of grandmothers, sisters ... and aunts. A month ago, my aunts Cokie and Pat, circled the wagons and finally freed my scarred and wary heart. They let me know that I am and always have been loved. They reminded me that for all the loss and pain they are still here, and we are from strong stock. 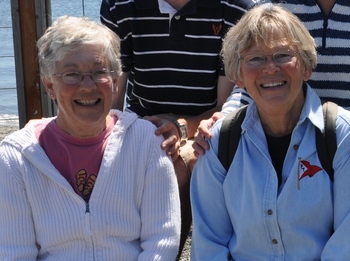 To Aunt Pat and Aunt Cokie, who I love very much, Happy Mother's Day!