Cute, clever and connected: Otter 501 is the latest film from Mark Shelley, executive producer/director of photography; Bob Talbot, director and Sea Studios Foundation. This revolutionary new documentary has been selected to share the stage with Dr. Sylvia Earle and Jean-Michel Cousteau to kick off the BLUE Ocean Film Festival as the featured film of the opening night's marquee event.

The festival, simply referred to as BLUE, is a global ocean film and conservation event like no other. It is a convergence of everything and everyone; a who's who of ocean science, exploration, advocacy and education, and a cinematic feast for the mind's imagination. BLUE runs from September 24 through 30, 2012 in Monterey, California.

The featured screening of Otter 501 will also help kick off Sea Otter Awareness Week, September 23 through 29, 2012.

Not since the days of Chaplin and silent-film has one actor been able to convey so much without uttering a single word as Otter 501, the audaciously adorable star of the film. And if that isn't enough to make you rush out to see this revolutionary new documentary, consider this - like Chaplin, Otter 501 does all her own stunts, and she's much more fun to watch!

Otter 501 might be little, but she's no tramp, she's a fighter and a survivor, and above all else, she is a symbol of hope for the next generation of marine conservationists and ocean advocates, and she is making waves as the irresistible driving force behind this new renaissance in sea otter awareness which is taking place not only in theaters, but on social media - through Facebook and Twitter, as well. 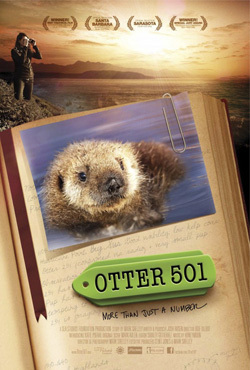 Everything about Otter 501 is revolutionary, including this new genre of documentary which is turning heads and making a difference in human interaction with the marine environment by engaging us in a discussion about this important, but endangered marine mammal through an on-line social media experience that is a seamless extension of the film itself.

What makes this documentary film so revolutionary is its Facebook narrative which enables us to follow 501 as an ongoing part of our ever expanding social media lives. In fact, the makers of Otter 501 are currently creating an immersive, multi-media web experience to tell the rest of Otter 501′s story. Find out more here.

With the help of her human co-star, Katie Pofahl,
Otter 501 is raising awareness about the plight of the southern sea otter and the film gives us an amazing inside look at the tremendous effort and commitment that goes into the care, feeding and education of an orphaned otter pup.

Found abandoned at less than one week of age and taken to the Monterey Bay Aquarium, Otter 501 came under the care of the aquarium's Sea Otter Research and Conservation Program (SORAC), and she was raised by an amazing surrogate mother otter named Toola.

We will never know about that fateful first week of 501's life and whether she was orphaned or abandoned, or whether her mother was a victim of man, nature or disease; but through this amazing film, we do get to know the rest of the story.

As we follow 501 and Toola from their early bonding to their separation six months later as 501 returns to the wild, we discover there really is a place in our hearts reserved just for otters.

If you haven't already guessed, 501 is no ordinary otter, and as the title to the movie about her suggests, she is more than just a number - much more!

Little "Che' 501" as I like to call her, really is a new breed of sea otter - not in a physiological sense - but in a ground-breaking, socially rebellious sense, and she has a plan that involves us all.

You see, it's not enough to just to survive in nature anymore, the evolution of the southern sea otter must continue if the species is ever going to move beyond the brink, and they have to adapt to new challenges their ancestors never knew in order to survive and thrive in this ever changing world in which we must all coexist with one another.

. . . How do these creatures know that spring is at hand? They remember their ancestors that crawled on earth: the little fellows like otters, who took to sea and have grown great. Go out to the ocean, little ones, you will grow great or die. . . Robinson Jeffers

Sea otters are a keystone species and their impact on not only the health of the ocean but on our very survival is just beginning to be appreciated and understood. A recent study suggests that by keeping sea urchins in check, sea otters allow kelp forests to prosper which in turn allows more kelp to absorb CO2, thus helping to fight global warming.

Today, the southern sea otter is a federally listed threatened species and continues its slow recovery. According to U.S. Geological Survey scientists, the 2012 population survey for California's southern sea otters is 2,792. The number isn't good and suggests that the recovery has not only slowed but that the population may be at a plateau. When you consider that SORAC is now up to Otter 605 in its rehabilitation program, you appreciate just how fragile the current population is and how much smaller that number might be, if it wasn't for the efforts of SORAC.

So what's an otter to do? Well, 501 is organizing a revolution to save a species - her species - and she is doing it armed with a whole new set of social media skills to compliment the natural survival skills she learned from Toola.

SORAC isn't talking, but rumor has it that thanks to the success of Otter 501, all new otter pups going through the program, will now be trained in social media and given Facebook and Twitter accounts upon their release, along with little waterproof iPads to complement their traditional survival tools such as rocks for cracking open shells. 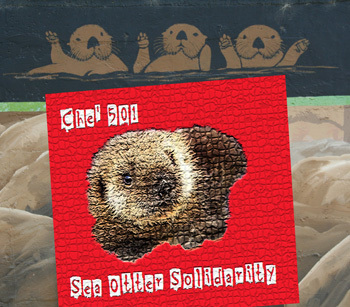 In a gesture of sea otter solidarity, little Che' 501 along with an ocean full of fellow otter revolutionaries and their human friends and protectors onshore, will be staging an #OtterTwitterTakeover to coincide with Sea Otter Awareness Week and the BLUE Ocean Film Festival.

Sea otter solidarity - what's it about? It's about survival of a species once nearly extinct. It's about never letting that happen again. It's about education and engagement of the audience.

It's not enough just to be a spectator in the theatre, we all need to step onto the stage of life and get involved in this story because what happens to otters foretells what will soon follow, and happen to us.

What 501 doesn't convey through words, her human co-star Katie, does. At the end of the film, when 501 is released back into the wild, we hear Katie whisper "make it - just make it" and as little 501 jumps into the sea, our hearts jump in with her.

If you are fortunate enough to see a screening of Otter 501 with Katie Pofahl holding a Q&A session afterwards, you will feel a tug at your heart when someone in the audience asks Katie, did she - did she make it?

YES, Katie will answer with a huge smile, 501 made it, and with all our help, hundreds and thousands more nameless and numberless otters will make it too.

In memory of Toola and Joy, with a special thank you to Katie Pofahl and Sea Studios Foundation.