Researchers in Italy announced this week that they had discovered a strange new tattoo on the ribcage of the 5,300-year-old mummy known as Ötzi the Iceman.

The find raises to 61 the number of Ötzi's known tattoos, and it came as a big surprise.

"We didn't expect to find a tattoo on the thoracic, as all the other tattoos are mainly close to joints and on his lower back and legs," Dr. Albert Zink, director of the Institute for Mummies and the Iceman in Bolzano and one of the scientists behind the discovery, told The Huffington Post in an email. 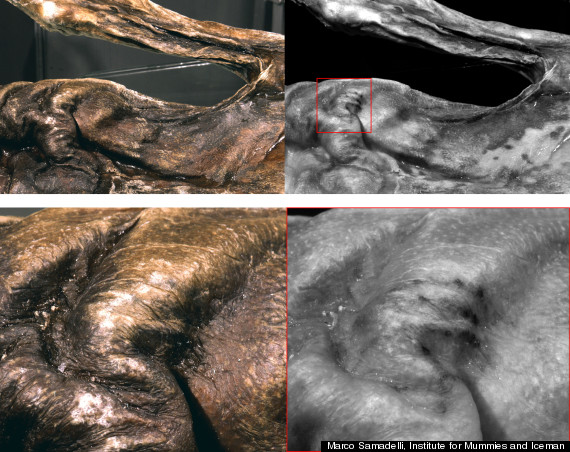 Ötzi's newly discovered tattoo, on the lower right side of the mummy's chest.

Ötzi was discovered in 1991 by a pair of German hikers in the Otztal Alps, near the border between Austria and Italy. Since then, researchers have conducted many studies on the remarkably well-preserved mummy. In addition to finding scores of tattoos, they've determined that the Iceman was likely about 45 years old at the time of his death and that he suffered from heart disease, Lyme disease, tooth decay, and joint pain.

For the new research, Zink and his colleagues used a non-invasive photography technique to study Ötzi's skin from different angles and in multiple wavelengths.

The tattoo consists of four parallel lines measuring 20 to 25 millimeters, RedOrbit reported. The researchers believe these markings were made by incisions into which charcoal was rubbed. 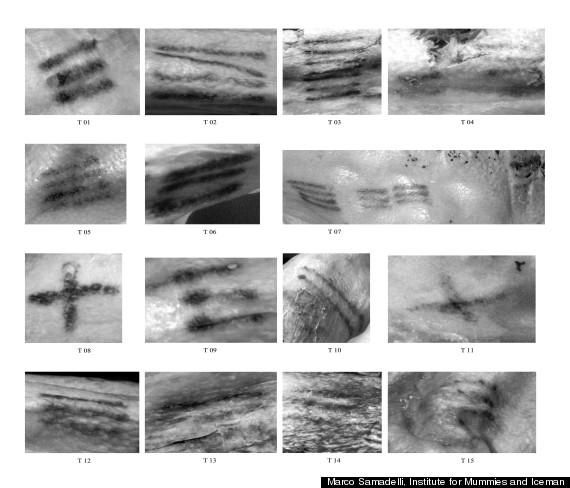 Since many of the Iceman's tattoos correspond to classic acupuncture points, the researchers previously thought that they were applied as part of a treatment for joint pain. But the new tattoo throws that theory into question, since it isn't located near a joint, according to Zink--though it may have been used as some sort of treatment for chest pain.

Whatever its purpose, the tattoo brings a sense of closure to Zink and his collaborators.

"For us, it was important to have finally (after more than 20 years) the exact number and location of all tattoos," Zink said in the email. "This work can now be used for further studies that will focus on the reason why the tattoos were made." 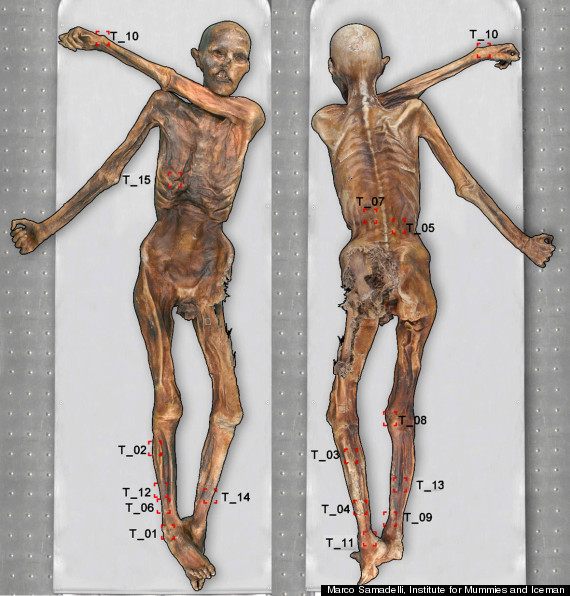 A map showing Ötzi's mummified body and the location of his tattoos.

A paper describing the newfound tattoo was published online Jan. 20, 2015 in the Journal of Cultural Heritage.