Gwen and I have decided to cosleep. That means that little baby Noah sleeps in bed with us. Cosleeping brings up a few questions and concerns and sometimes even an angry mob with pitchforks and torches.

In my experience, the two primary concerns are:

Question 1: What does cosleeping do to your sex life?

Answer: If you are asking this question, you clearly do not have young children. Because, my friend, after birth there ain't much sex for quite some time. Can be six weeks, can be six months. Depends on the circumstances. Don't forget, in birthing, a woman pushes an eight-pound watermelon that has shoulders out of her vagina. So that area can be a bit sore for a time.

And then she's nursing and not sleeping, so there may not be much sex drive. And basically, let's face it, biologically speaking, the point of sex is to create new life, so her body just thinks, "Been there, done that, got that one checked off the list." So her body may not point her in the direction of the lube and sex toys for a while.

Question 2: Isn't cosleeping dangerous for the baby? Don't people roll over onto their tiny fragile newborns?

Answer: As my friend Kevin aptly puts it, "The humans who roll onto their babies evolved out long ago." Plus, even when you're asleep, you know where things are. I mean, when's the last time you fell out of bed? You could sleep a whole night right on the edge, and you'd never fall out. Your sleeping body/mind somehow knows exactly where it is in relation to its environment.

Now, there are a few caveats. Human beings did not evolve with down comforters. So these are a no-no when cosleeping. Gwen and I had to trade our luscious down comforter and pillows for boring cotton. A down comforter could settle onto a baby's face and obstruct breathing. But a regular blanket provides no such danger. Even so, most of us keep the blankie a bit lower when we cosleep. This might sound less cozy than tucking it up over your neck and shoulders, but you just wear an extra layer to bed, and having your luscious little bundle cozied next to you trumps the blanket tenfold.

The other caveat is imbibing drugs, alcohol, and even certain prescription medications. These substances can numb a person's sleeping senses and make him or her a danger to an infant in the bed.

Beyond this, cosleeping has infinite perks. We don't have to wake up in the middle of the night and creep into the nursery to check on Noah's breathing, he's already right there when Gwen needs to nurse, and studies even show that when mama and baby sleep together, they match each other's sleep cycles -- baby sleeps better and mom and baby wake together rather than at unharmonious intervals. Plus, these days, I'm working eight in the morning to five (or six) at night every day, so sleeping next to Noah keeps me feeling connected to him. If he slept in a different room, I'd get two, maybe three, hours a day with him, but sleeping together, we spend twelve or more hours a day near each other. Sometimes I wake up in the middle of the night and just sniff him before falling back to sleep. 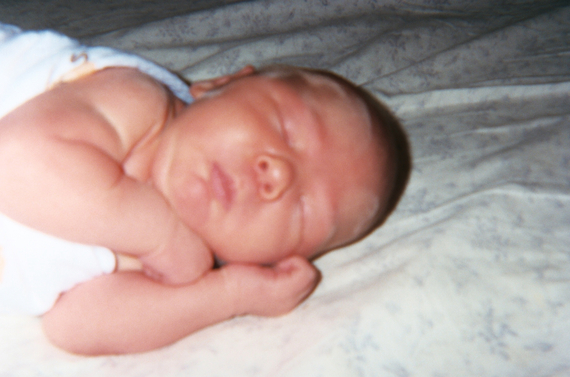 BRIAN LEAF is the author of Misadventures of a Parenting Yogi. Visit him on facebook at www.facebook.com/Misadventures.of.a.Yogi.

author of Misadventures of a Garden State Yogi