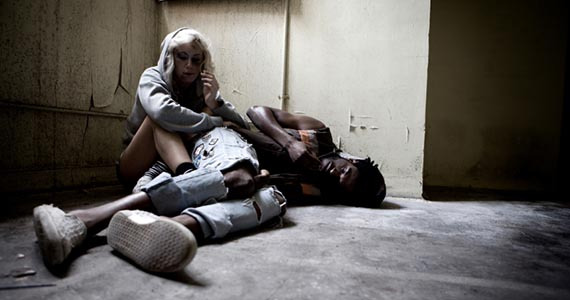 Recently the world has been privy to the intimate details of the drug use of two white male celebrities. On one hand there is Justin Bieber; during a recent arrest for DUI, Bieber admitted to taking Xanax and marijuana. A few days before, during a police raid in connection to a vandalism case, police reportedly found the drug "molly" in the room of his houseguest and arrested the guest on a felony drug possession. Justin Bieber was not arrested at this time. It has been alleged that police overlooked drug paraphernalia and cookie jars filled with marijuana during the raid. Lt. David Thompson with the Los Angeles County Sheriff's Department denies this. While on a private flight this past week with his dad, the underage Bieber reportedly admitted to drinking alcohol and smoking marijuana after the plane was inspected for drugs upon landing. No illegal drugs were found during the plane's search.

This week, actor Phillip Seymor Hoffman was found dead at 46 from an apparent drug overdose. A friend reportedly found him dead in his bathroom with a syringe still in his arm. Investigators found close to 50 bags of envelopes of heroin along with drug paraphernalia in his apartment. A few days later, authorities reportedly arrested four persons alleged to be connected with supplying the drugs to Hoffman.

Addiction is a sickness and I know that many resort to drugs as a form of self-healing, and some as a form of self-hate. After years of witnessing my own stepfather's addiction to crack cocaine, I know, from personal experience, how addiction can weaken the will power of the strongest person, as well as the ways in which drugs can destroy families. Putting the moral implications of drug addiction and the drug business aside, I am of the belief that drug use should not be criminalized. After all, the individuals afflicted with substance addiction need medical help, not jail. The consent between a supplier and an addict influences my belief against the criminalization of drugs. When we speak of drug addicts, we as a society ought to take a compassionate stance in conjunction with the use of tough love if we are to help them escape the clutches of addiction. More importantly however, I think compassion is a necessary response, no matter who the drug addict is. This is where the media narrative constructed around the drug problems of Bieber and Hoffman concern me.

In both narratives in the news about Bieber and Hoffman, their drug use is not demonized. Despite the reality that Hoffman's reported 50 envelopes of heroin could have likely equated to a felony drug charge, unlike Bieber's black houseguest, Hoffman is not perceived or depicted as "criminal." Even though Hoffman was found dead with a syringe in his arm, he was not demonized for it. News outlets mentioned the syringe fact in a few sentences but spent most of their word count lauding him as a talented actor and nice neighbor. Justin Bieber's reported drug use has been frequently depicted either as "what someone young and powerful does" or as a "man who needs to go to rehab." But in neither case are they demonized.

The unfortunate reality is that many poor and minority people in this country are not afforded this same leeway. When they turn to drugs (for the same reasons that rich white men do), they are not shown the same compassion by the media and the public as Bieber and Hoffman are. Instead they are labeled as degenerates, useless, a drain on society, irresponsible, and their problems are seen as their fault. They are referred to as "addicts" and not given the privilege of personal recognition by name, or their talent or skill.

It has also been thoroughly proven that poor people and minority drug use is criminalized more harshly. Out of the 200,000 persons sentenced to federal prisons in 2012, half of these were drug offenders. It is no mystery that those convicted as drug offenders are disproportionally Black although there is no significant difference in the rates in which Whites and Blacks use drugs. Convicted drug offenders are also mostly poor, despite the fact that drug abuse is rampant in wealthy communities as well. Most drug policies in this country were created as racialized policies. For example, marijuana prohibition was influenced by the stereotype that it made Mexicans crazy. Cocaine got a bad rap in the early 1900s because allegations spread that cocaine made Black men rape White women.

Ironically, most initiatives created today to decriminalize drugs have been influenced by the drug use and drug arrest of White middle-class Americans. States that have legalized marijuana recently, for example, have not been states with the biggest drug epidemics in urban cities. The images of White middle-class individuals standing in line the first day that marijuana became legal in Colorado further proves my point that decriminalization is wearing a White middle-class face while the war on drugs targets the poor, Black, and Latino communities. This is the privilege that white and middle class individuals have in relationship to drugs.

The privilege that wealthy, famous, white men have in this regard is much greater. They get jobs and the public's forgiveness despite their drug arrest or abuse record (i.e. Robert Downey Jr., Charlie Sheen, Tim Allen, and three Beatles members). Poor people and minorities with drug arrest records get collateral consequences of incarceration; legal liabilities that prevent them from getting employment, housing, licenses, and other needed services and benefits they need to survive.

The death of Hoffman and the immediate need to find his suppliers spoke to the value that was placed on his life. With over 3,000 heroin deaths per year, investigators are not using their resources to find the suppliers of poor people and people of color who fall victim to drug overdoses. The double standard tells us it is only the lives of rich and famous drug addicts that are valuable. If that is the message we are getting, then it is a horrible message indeed.

I am not arguing that we should treat rich white men and their drug problems like we inhumanely treat the poor and people of color. I think it should be reverse. What we need is an unbiased compassion for all individuals. The same compassion, humane attitude, and value of life we as a society lend to rich white men on drugs, is the same we should extend to all addicts. Philosopher Schopenhauer argued that compassion is the real basis of morality. This fellow feeling is what defines our actions and lives as moral. But if compassion only extends to certain individuals and not to others, then what does that say about our own morality?

People living in poverty, and people of color, struggling with drug addiction, want and need to know that their life matters too. And it should, even if they have never given us a hit song or a brilliant movie.