What if we had a remedy that could solve some of the toughest physical and mental health problems we face today? What if all of the side effects of this cure were actually good for you? We have such a solution - and it's called the "Great Outdoors." 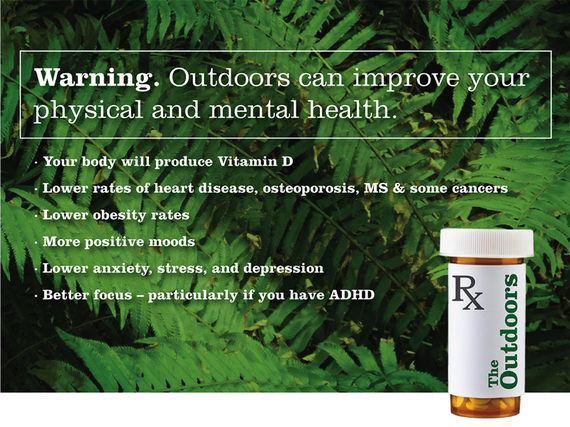 We are physically active when we spend time outdoors, so we are less likely to become obese. When sunshine hits our skin, we form Vitamin D, which helps with a number of health issues. Peer-reviewed scientific studies have shown that time spent outside lowers rates of heart disease, osteoporosis, multiple sclerosis, and some forms of cancer. Kids with ADHD focus better when they spend time outdoors. And, nature time leads to more positive moods, as well as lower stress and anxiety.

While it may seem like common sense that fresh air and exercise are good for our health, the trends point to dramatic drops in outdoor time for children. In one generation - just thirty years - kids are getting outdoors half as often as their parents, while child obesity rates have tripled and the use of Ritalin to address ADHD has skyrocketed 30 times. It is no coincidence that Rich Louv, author of Last Child in the Woods, coined the term "Nature Deficit Disorder" to describe this issue.

In fact, kids today are getting less time outside than chickens or prisoners. We believe in the power of nature so strongly that we have free-range chickens that get to scurry about in the fresh air 24/7; and in many prisons we have mandated that inmates receive a minimum of two hours outside each day. Sadly, many kids spend less than an hour a day outside. 30% of kids get less than 15 minutes of recess a day, and many schools have canceled recess completely.

There are a number of factors contributing to this trend...but the solution is not complicated. You don't need to be in a national park like Yosemite or the Grand Canyon to enjoy the benefits of the Great Outdoors. In fact, all you need to do to get outdoors is to simply take a step outside your door! This is true even in the most urban of locations.

In my recent TEDx Talk on this issue, called "Get Hooked on Nature," I relate a story of my colleague Juan Martinez. Juan was growing up as a kid in South Central Los Angeles when he and his father grabbed a sledgehammer and smashed through their concrete patio to plant a garden. This garden provided hours of outdoor time for his family right in their backyard.

A Kaiser Family Foundation study indicates that children are getting an average of seven hours and 40 minutes of screen time daily. Rather than demonize technology, we can benefit by tapping into the seductive nature of video games to get our kids outside. There are a variety of apps that help kids to explore the outdoors around them. Whether you want to identify birds, insects, or stars - there's an app for that. An increasingly popular activity is geocaching, which is a sort of high-tech scavenger hunt using the GPS in your smartphone to discover hidden "caches" or treasures.

My organization - IslandWood - is working to build an app that will drive kids off their couches to explore and learn in the outdoors. When successfully launched, we hope to see the day when kids are spending seven hours and 40 minutes outside each day.

As parents and caregivers, we want what is best for our children. We have a remedy to many of our toughest problems and it's totally free. So encourage your kids to play outside after school. Coopt technology to motivate them. Get creative - even if it means something as drastic as using a sledgehammer to smash up your concrete patio. When you get outside with your kids, you will be blessed by the beauty of nature, and you'll receive a boost to your physical and mental health. So get your family outside today!