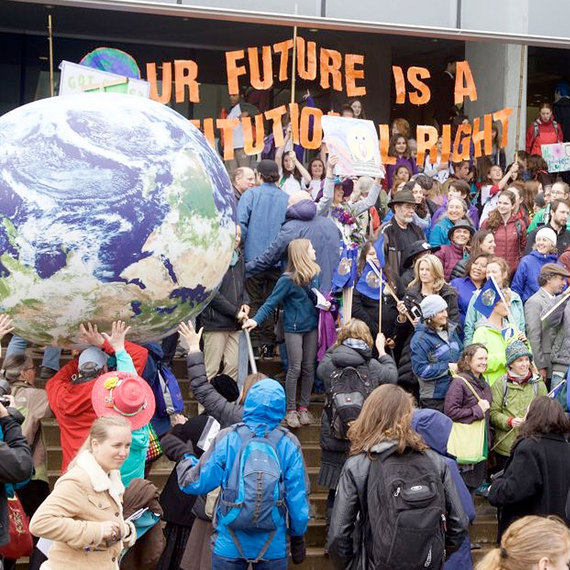 In past posts and in my recent book, THE ONCE AND FUTURE OCEAN, I have commented on what is called "the public trust doctrine", a long-standing legal concept designed to protect the common wealth, our natural resources, precedent and outside statutory law, for the benefit of future generations. In effect, government acts as a "trustee" for this trust, with the management responsibility and accountability similar to that of oversight of an estate or investment account, not just to preserve value but also to enhance and sustain value over time for the benefit of heirs and beneficiaries, in this case the public. The doctrine was first applied to water and stream beds and eventually expanded to the guarantee of clean water, clean air, and other assets part of the community of Nature.

Thus, by law, natural resources in the United States are owned by the public, held in trust, and can only be licensed and exploited to a sustainable extent allowing the resources and inherent value to be preserved for future use. The government is obligated to secure and enforce that value by substantive standards, procedural standards, loyalty to the people over private parties, and the duty not to favor one beneficiary class over another. It is an astonishing public obligation, one that has been systematically diminished, abused, and ignored by government in relation to the licensing of oil, gas, and mineral rights for decades. I believe history will show this to be a massive appropriation of public assets to private exploitation amplified by the cost of depletion and the negative environmental consequences that we are just beginning to understand today.

Our Children's Trust is fighting against this phenomenon by bringing legal action in all 50 states and the federal government using the public trust doctrine as the basis for cause to force enforcement of existing regulation and redress the evident, measurable damages. To my wonder and delight, the plaintiffs are all under 18 years of age, at least they were when many of these cases were initiated. They have grown older by the time it takes to move claims and proceedings through the frequently antagonistic courts, adverse judgments, successful appeals, and the ever-increasing, encouraging number of victories.

On April 8, Our Children's Trust won a landmark victory in Oregon described as follows:

Today, U.S. Magistrate Judge Thomas Coffin of the federal District Court in Eugene, Oregon, decided in favor of our 21 young Plaintiffs, and Dr. James Hansen on behalf of future generations, in their landmark constitutional climate change case brought against the federal government and the fossil fuel industry.

The judge resoundingly rejected all arguments raised by the Federal Government and Fossil Fuel Industry in their Motions to Dismiss that sought to deny youth their fundamental rights under the constitution and the public trust doctrine.

Instead, Judge Coffin decided that the youth's case must proceed. He wrote: "The intractability of the debates before Congress and state legislatures and the alleged valuing of short term economic interest despite the cost to human life, necessitates a need for the courts to evaluate the constitutional parameters of the action or inaction taken by the government. This is especially true when such harms have an alleged disparate impact on a discrete class of society." The Court's decision upheld the youth Plaintiffs' Fifth and Ninth Amendment claims and upheld their assertion of violations under the public trust doctrine, ruling that there is a federal public trust and that plaintiffs' claims can proceed.

Judge Coffin accepted the youth's presentation of undisputed scientific evidence that the federal government has damaged and continues to damage these young Plaintiffs' personal security and other fundamental rights. Now these young plaintiffs have the right to prove that the government's role in harming them has been knowing and deliberate for more than 50 years."

This is how it works. You have to fight for the right to fight for your rights, against all the power of government and the vested interest of the fossil fuel industry that ought to be guaranteeing those rights in the first place. Let's salute and support Our Children's Trust; those kids are fighting the good fight for us all.
--
Peter Neill is author of the recently released "The Once and Future Ocean: Notes Toward a New Hydraulic Society" now available through Amazon.com, IPG.com, and through your favorite local bookseller.