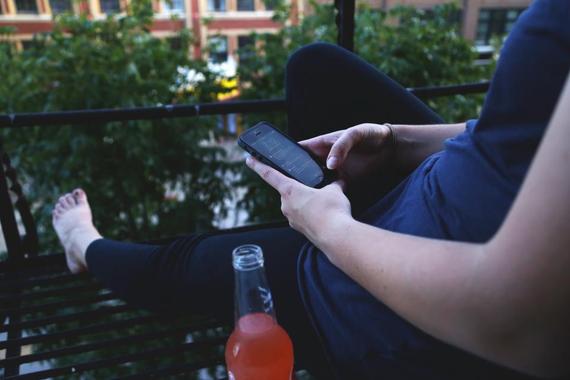 While art directing my perfectly curated breakfast of avocado toast and an iced latte, complete with a blog-worthy striped paper straw, I thought to myself daaamn this looks good, I'm going to get so many likes. But I also thought about a simpler time, when I ate lunch without photographing it, when I could see the stage of a concert with my own eyes instead of through the one hundred phones in front of me, and before I felt the need to micro-document every single thing I did to prove to my high school frenemies on Facebook that my life was way, way better than any of theirs. Just ten years ago the world was very different.

With the advent of Facebook, Instagram, and Twitter (the holy trinity), and of course their handheld facilitator -- the smart phone, our lives, our relationships and the way we interact has totally transformed. Though, with each technological triumph are we becoming a better society? A wise man named Neil Postman opined, "Technological change is always a Faustian bargain: technology giveth and technology taketh away, and not always in equal measure. A new technology sometimes creates more than it destroys. Sometimes, it destroys more than it creates."

So, which camp are we in? Are we better off now than we were ten years ago? It's hard to say. Sure we're all zombies with stooped heads, growing hunchbacks, stuck in the technology loop Portlandia perfectly described:

But the world has also shrunk and we're able to meet and bond with people all over the place. It's now easier than ever to find and build our own tribes. Access to information, art and music has never been more democratic. And of course, how we fall in love today is different as well.

I just finished reading comedian Aziz Ansari's new book Modern Romance, an interesting sociological study on dating in modern times, in all its glory and horror. He too grappled with the question of whether we're better off now than we were pre-social media. In America Tinder, Grindr, OkCupid and their dozens of copycats bring people together with a few taps and swipes. But in Japan, marriage and birth rates are declining and the contemporary internet age seems to be isolating people from each other more than bringing them together. Ansari didn't find a definitive answer to whether we're better off, but in much of the world social media is instrumental in getting people together.

It's so commonplace now, that more and more the answer to "So how did you two meet?" is simply "the internet." It is so the norm that chatting someone up, human to human is so weird it merits experiments like this:

Sometimes people find their soulmates online and sometimes aspiring writers turn horrible dates into great short stories. But let's focus on the soulmate couple. They swiped their way to true love and are now married, but social media's influence does not end there. Dating apps and sites are of course expediting the cheating process, busting up marriages left and right. Curious partners snoop their way into uncovering cheating spouses who reconnected with their high school sweethearts thanks to Facebook. Concerned fans tweet wives photo discoveries. Then there are all those politicians sending crotch shots to strangers, mangling their careers and their marriages in one fell swoop.

Even once the marriage is a pile of smoking ashes, the impact of selfie sharing and status updates is not over. Shiny social media accounts can make a person the envy of all their friends but they can also get them into hot water. Custody, alimony, and all sorts of other details of a divorce can be tied to what is posted online.

It does not fare well for a custody argument when a person's supposed to be with the kids but instead they're tagged in Facebook pictures slamming shots in Vegas. Boasting about a new car and flashy lifestyle on Twitter does not bode well for the "I swear I'm broke. I need alimony, your Honor" stance. Even the innocuous can be detrimental. Kid not properly bucked in his carseat in that Instagram post? Does it matter that they weren't moving and two seconds after the picture was taken the parent fixed the buckle? It certainly doesn't to a spouse's attorney when she argues that they're an unfit parent who doesn't care about a child's safety.

So what's a person to do? Well, use your brain. Basically, don't be dumb. Maybe posting a link to Rihanna's "Bitch Better Have My Money" (NSFW!!!) video with a "Lol" isn't the best status update to post on the morning of your court hearing. Set your privacy settings so that you can review pictures before you're tagged in them. Think through each thing you want post, and when you decide it's fine, don't post it, take a walk around the block and think it through once more. Honestly, if possible, the best idea is unplug. Take a break from all your accounts. Commune with nature. Meet up with your friends and talk to them in person. Read a newspaper instead of a news feed. Let us lawyers do our jobs while you enjoy the peace and quiet of a simpler life. And hope that your soon to be ex-spouse didn't take any of this advice and all his or her internet mistakes will prove fruitful for you.

So, have we destroyed more than we created? Are we better off in this new frontier where we can Seamless tacos, swipe right to find a date, tweet the entire world our deepest and shallowest thoughts, text our grandmas happy birthday, and share the screenshots on Instagram -- all without having to move an inch off our couches? Are we better communicators now? Is all this convenience giving us better, streamlined lives?

Well the answer is simple. Just kidding! I have no idea. And I don't have the free time to get a PhD in sociology and anthropology and the nine hundred other fields that all have to converge to get into even the same ballpark as the answer. I know this much to be true: Neil Postman was right. Social media giveth and taketh away. Social media brings us together and tears us apart. Social media can prove helpful and totally detrimental to divorce proceedings. This is the world we live in now, we must accept it. Now who wants tacos? We don't have to talk to anyone at all to get them delivered to our door. Hang on, I'll grab my phone.

More:
FacebookTwitterdivorceRelationshipsInstagram
Newsletter Sign Up
An essential daily guide to achieving the good life
Subscribe to our lifestyle email.
Successfully Subscribed!
Realness delivered to your inbox