In May, a piece broke from Newsweek, launching a richly reported accusation against an activist superstar in the development field of human trafficking, Somaly Mam. According to Newsweek, there is significant evidence pointing to falsehoods in the back story of Mam. The details regarding how she was sold into a brothel and the amount of time spent in captivity contain inconsistencies that can't be ignored. In addition, the stories she tells of girls she has rescued also lack integrity. The most notable of which is a girl named Long Pross, who was said to have been beaten, tortured, and had one eye gouged out by an angry pimp, yet medical records have surfaced showing she had eye surgery for a nonmalignant tumor in a Cambodian Eye Hospital. 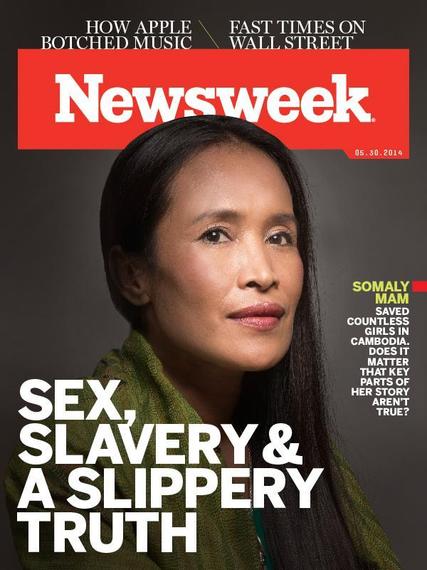 
The ripple effect of this indicting news article include Somaly Mam resigning from the Somaly Mam Foundation and fervent responses from development workers and humanitarian reporters such as Nicholas Kristof, who himself have reported stories highlighting Mam and Pross.

This scandal exposes how utterly entangled we are in our broken world. As if it is not tragic enough the problem of human slavery persists, the noble efforts to combat the issue is tainted with inevitable human weakness; when good causes are sometimes met with bad methods, where helping often hurts. The road to justice is paved with well-intentioned bricks wobbling on shaky foundation dependent upon the art of truthful storytelling.

As much as I believe the article points to some damning evidence, not being omniscient or even a trained investigator, there is no way for me to discern the absolute truth. Newsweek is not without bias, and whatever opinion I conclude of Somaly Mam, will be just that, an opinion. Although we have a responsibility to hold those in leadership accountable to integrity and truth-telling, it is ultimately not our place to judge a person's heart. What it does warrant, is an opportunity to do some collective soul-searching, a dislodging of the log in our own eyes, when it comes to our privileged position as "the crowd" -- the consumers of storytelling.

There would be no incentive for fanciful storytellers to pull out the most heinous stories, or to embellish with exaggerated details, if they didn't understand the propensity in human psychology to perk up to sensational reporting. We are drawn to the controversial, the scandalous, the extraordinary. The 1 percent success stories of heroic activism and justice work overshadow the 99 percent of boring, uninteresting, necessary sweat and labor behind it. How much blame do we share in the Somaly Mam scandal, for being the crowd thirsty for the most heartrending tale? What is chilling to consider is that eventually the stories need to become more and more gory before it can gain traction. Like the rowdy mobs in the gladiator arenas, we are no longer going to be satisfied with mediocre brutality, but the most violent of stories.

In the Newsweek article, Mam was noted in an interview to claim girls as young as three are being held in Cambodian brothels. In contrast, experts in the field say rarely are prepubescent girls found in brothels, although there is a steady supply of girls from the age of 14 and 17. Should we not be equally outraged at both three-year-olds and 14 to 17-year-old girls being trafficked for sex? Why would a storyteller be tempted to make an inhumane situation sound even worse than reality? Could it be, that storytellers exaggerate the level of horror because they know it provides the extra emotional leverage to reach for the donor wallet? We have created a hierarchy of evil, and our generosity has become conditional on the grade of injustice given to the stories we consume.

When we are responding to stories out of the darker aspects of our humanity -- fear, shame and horror -- we react quickly, anything to rid ourselves of that ugly feeling. We write a check or click share on social media. The sudden jump in those stats then spurs the storytellers to seek out even darker stories, and if need be, stretch the truth to add more shock factor. We become trapped in this vicious cycle, a marketing machine meant to do good, but powered by our brokenness instead of our strengths.

It is time we inspect the basic motives to why we engage in this fight against injustice. Whether it is on grounds of human decency and equality, or because we are compelled by our faith; let's recalibrate our moral compass so it is not led astray by our tendency to strive for the sensational stories. As a Christian, I am wrecked by injustice, because the depth to which we stoop as society to perpetrate evil in the darkness is sickening. But I believe even more strongly in the light of hope; in the resilience of the wounded, in the unexpected kindness of the enemy. In doing justice, it is to the latter sentiment I want to follow. It is a vision for a world made right with tools of righteousness and peace and mercy. We should seek to find the truth, not the most interesting or the most glamorous or the ones advocated by the most famous of celebrities. We should seek justice not because we are appropriately appalled, but because it is the right thing to do.

Let our generosity and work be compelled not by how disturbingly graphic injustice is, but by the beauty of the people affected by it. Lasting justice can not be sustained by feeding the insatiable appetite for the extraordinary; it requires the steadfast support of the work of the ordinary. The stories we should demand are the ones of the voiceless, told with dignity, truth and courage. The storyteller need not embellish the lives of ordinary folks; there is brilliance in all human beings. It is time we take the responsibility to see what is beautiful through authentic testimonies from the gritty lives of the powerless.