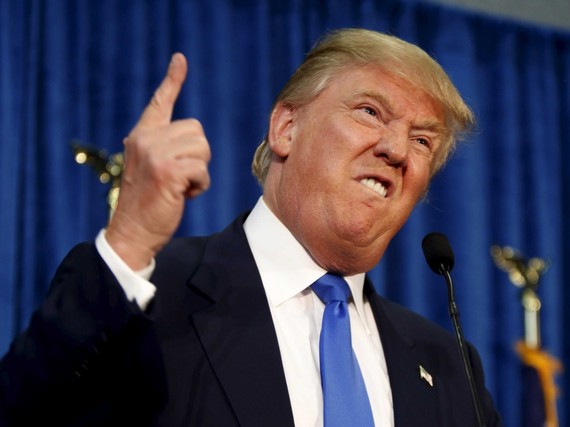 If you squint your eyes just right, the news can look like a procession of angry faces grimacing with furious indignation. This is the streaming video of our politics of resentment, the playing out of carefully cultivated and nurtured feelings of being wronged or treated unfairly.

Yes, many of these feelings of being "wronged" or "treated unfairly" are deliberately and cynically created. They are not just the normal human response to being genuinely wronged. Instead, they are manufactured, constructed on lies and distortions to generate political power.

The kind of lies that can stoke this type of resentment are that white people have been wronged when other races are treated equally, that straight men are wronged when gender inclusivity is the law (and practice) of the land, that certain Christians are somehow diminished in their freedom to practice their faith when others have the same religious freedom, that a nation of immigrants is ironically weakened by immigrants, and that government or vague "elites" are to blame for my troubles.

This politically cultivated resentment is different and infinitely more dangerous than a genuine response to being wronged precisely because it is based on untruths and it can be much more resistant to the religious and psychological practices that can help reduce resentment at actual wrong and transform it toward healing.

This type of manufactured resentment is, frankly, the basis of the "Trumpism" that has been given enormous power through the presidential campaign of Donald Trump. Trump's supporters are encouraged to feel resentful when others get equal rights, and they are made to feel this equality for others somehow weakens them. The dangers of this position have been made clear by a wide range of religious leaders, including Christian leaders who, in a theologically substantive statement that can be found at calledtoresist.org, passionately condemned Republican presidential frontrunner Donald Trump, calling his campaign message "contrary to our Christian values" and condemning his bombastic rhetoric as "racist, bigoted, and hateful." The statement is specific about Trump's words and policy advocacy that demean immigrants, Muslims, women, people of color and the disabled.

But to see how far this kind of politics of resentment has penetrated into our politics, there is some worrisome evidence on the left as well. The Sanders campaign, in addition to drawing attention to the gross economic injustices of the US, has been accused of trading on the idea of "unfairness" and accusations of a rigged political system when things don't go the way some supporters want, targeting 'party elites'. At the recent Nevada state convention when Democratic Chairwoman Roberta Lange declined to make a rule change that would have benefitted Bernie Sanders, Sanders supporters yelled, threw things and then flooded Lange with death threats and personalized insults.

Instead of roundly condemning the violence and threats, Sen. Bernie Sanders instead struck back Tuesday with a statement that dismissed complaints from Nevada Democrats as "nonsense" and asserted that his backers were not being treated with "fairness and respect."

No. That's not the only issue here, Sen. Sanders. I will disclose that I have been a Sanders supporter and caucused for him in my state. I have had great hopes of the movement-building language of the Sanders campaign as a way to engage in long-term change in our social and political life. But death threats and personalized harassment are never okay and it is no way to build a transformational movement.

It is the same old, same old.

The politics of resentment will never transform this society toward greater justice and peace. Unresolved resentment harms and can even destroy people and societies.

In the original work on Just Peace first articulated by a group of 23 Christian religious leaders and scholars changed how we approach peacemaking because it focused on actual practices that have been historically proven to reduce conflict and to achieve more peace with justice. I was part of that original group of 23 and yet I opposed the practice "Acknowledge Responsibility for Conflict and Injustice and Seek Repentance and Forgiveness."

I opposed that practice on forgiveness precisely because in my work with battered women I knew they get told over and over to 'forgive and forget' and go back to their abusers without a call for the abuser to confess their wrongdoing and stop the battering.

But those who articulated this practice dove deeply into what forgiveness really means and how resentment can be overcome. It involves the "cultivation of empathy," the "forbearance from revenge," and the capacity to at least admit the possibility that there could be "future reconciliation." Thirty Jewish, Christian and Muslim scholars and religious leaders have also attested to how this work of acknowledgement of responsibility for conflict and injustice and the pursuit of repentance and forgiveness is present in each of their traditions.

But what about "manufactured resentment"? I have said it is resistant to these historic practices, but I have not said it is impossible to transform them.

Speaking for myself, I know if I nurture my own anger and resentment in response to the anger and resentment of those with whom I vehemently disagree, I only add to the general mess of the politics of resentment. I personally try to engage the Just Peace practice of compassionate connection.

But, I want to raise a strong caution here. Each one of us stands in a different relationship to the construct of power and privilege in this society, and therefore each one of us has to decide when and even if to engage, and how. As Alice Walker notes in her definition of Womanist that sometimes "periodically" it is necessary to be a separatist "for health." Do not mistake engaging our times for liberal "choice," the ability to come and go in the struggle as you see fit.

Those who are on the receiving end of this manufactured resentment have no options on "being in the struggle" as it comes to their doors (and sometimes even breaks down their doors without warrants). White liberals say they 'don't see race,' but as I wrote in a previous Huffington Post piece, it doesn't matter. "Race sees you." Homophobia sees you. Classism sees you. Nativism sees you. And so forth. It is more a matter of strategic postures that people adopt that can and must vary, even vary for the same person at different times even as a matter of sheer survival.

My strategic posture relative to compassionate connection is to try to use my own race, gender, class and faith privilege to try to get through the barriers being thrown up by manufactured resentment and get some face time, some voice time, some faith time with those on the other side of this wall being thrown up in our society.

I think a very good example of this kind of work is demonstrated by Anna Merlan in her article for Jezebel We Called Up Bernie Fans to Who Threatened Nevada Dem State Chair and Asked Them to Explain Themselves. The few she was able to reach had varied responses, from embarrassment to being glad they had "drawn attention" to what they perceived as unfairness to frustration, disaffection and loneliness. I was impressed with this article, because the author tried to get to the feelings and not the ideology of those who made the threats.

What did those feel who had been contacted? Did some personal contact inspire empathy? Perhaps.

There were thousands of replies to this article that were "approved" some of which I read. Some were profane, angry or merely defensive, though some also approving. By implication others were "not approved." Even so, the comments section begins "Warning: These may contain graphic material."

This is a microcosm of the bitter fact that trying to listen and learn and reach out can be met with anger and rejection. But not always. Not always.

We say in the peace movement, "When you mirror your enemy, you become your enemy."

That I will not do.