As the Earth has warmed over the past 30 years, the global water cycle has begun to change. In particular, our snows have begun to disappear. The implications for the water systems we've built and operate are vast and pervasive. And despite decades of research, observations, and outreach to water managers, we're not ready.

Nearly three decades ago, as a young graduate student at the Energy and Resources Group at the University of California, Berkeley, I published initial results from the core of my doctoral dissertation to integrate regional hydrologic models with output from the three major general circulation models of the climate in operation in the United States. Those models -- the Goddard Institute for Space Studies (GISS) model under the direction of Dr. James Hansen, the Geophysical Fluid Dynamics Model (GFDL) under the direction of Dr. Syukoro Manabe, and the model developed at the National Center for Atmospheric Research (NCAR) under the direction of Dr. Warren Washington -- were still too coarse in spatial resolution to provide much detailed information on the effects of climate changes on regional and local water resources.

My modeling produced some disturbing results with implications for the future of water resources availability and management in the western United States and regions around the world dependent on snowfall and snowmelt hydrology: global climate changes and especially the rising global temperatures would have dramatic impacts on the timing of water flows in rivers and the extent and duration of mountain snowpack. In 1985 at a conference on arid lands in Tucson, Arizona, I published the following:

"Increases in average monthly temperature alone have major implications for the timing of runoff. In regions with significant quantities of snow - and thus spring snowmelt - temperature increases will result in less snowfall during winter months and faster runoff in the spring... The reason for this is the reduction in the ratio of snow to total precipitation during the winter months, combined with an earlier spring melting of the winter snowpack." [Gleick, P.H. 1985. Regional hydrologic impacts of global climatic changes. Proceedings of an International Research and Development Conference, Arid Lands: Today and Tomorrow. (E.E. Whitehead, C.F. Hutchinson, B.N. Timmermann, and R.G. Varady, editors). October 20 25, 1985. University of Arizona, Office of Arid Lands Studies, Tucson, Arizona. pp.43-60. (Westview Press, Boulder, Colorado, 1988)]

In 1987, final results of this work were published in the journal Climatic Change, edited by one of the giants in the field of climate research, Dr. Stephen Schneider.

"Increases in temperature alone cause increases in average winter runoff due to an increase in the proportion of rain to snow and hence a decrease in the storage of water in the snowpack during the winter months... For all ten hypothetical [climate change] scenarios evaluated, major shifts in the timing of monthly runoff can be seen...The changes in the timing of runoff occur primarily because of the increase in average temperatures, which has two effects: (i) a large decrease in the proportion of winter precipitation that falls as snow, and (ii) an earlier, faster, and shorter spring snowmelt." [Gleick, P.H. 1987b. Regional hydrologic consequences of increases in atmospheric carbon dioxide and other trace gases. Climatic Change. Vol. 10, No. 2, pp. 137 161]


Even 30 years ago, when this work was being done, climatologists were strongly convinced that continued emissions of greenhouse gases would change the climate based on our understanding of atmospheric physics, chemistry, and dynamics, the work of climate modelers, and evidence from ancient paleoclimatic records, but no definitive "signal" of climate change had yet been detected above the "noise" of natural fluctuations and variations in climate.

Those days are long gone. The evidence of human-caused climate change is now unambiguous in an increasingly and disturbingly large number of signals: rising temperatures, rising sea levels, changes in extreme storm and precipitation events, massive disappearance of Arctic ice, accelerated melt rates in Greenland and Antarctica, changes in ecosystem dynamics, disruption in species distributions, earlier vegetation blooming patterns, and on and on. And one key piece of that evidence is the change in snow dynamics forecast in the 1980s. Figure 1 shows some of the evidence of these changes over the past half century in the western United States. 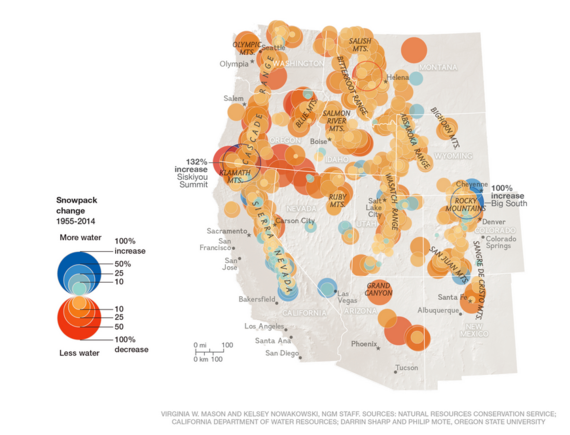 We're not ready. We still manage our water systems for the 20th-century climate we use to have, not the 21st-century climate we will have. We still act as though our water problems can be solved with traditional solutions despite the growing evidence of peak water limits in places like the western US. And we still assume that we can indefinitely overdraft our groundwater, suck our rivers dry, and expand our populations in arid regions. We cannot. The sooner we accept the new reality of climate change, the sooner we can have a real conversation about the most effective strategies for truly sustainable water management and use.

Some Sources for More Information on Our Changing Snow