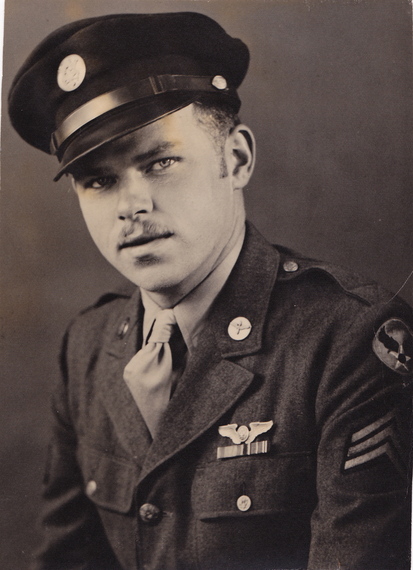 My father would be 97 years old on May 12th. I lost him five years ago and, during those five years, over 1 million more World War II veterans have passed away. Fewer than 700,000 WWII veterans are alive today, and we are losing them at a rate of about 450 a day. Soon they will be gone, along with so many of their first hand stories of courage, survival, and sacrifice. I tell one story here.

My father, William A. Cotter, enlisted in the United States Army Air Corp. in August 1942. He was then 23 years old and had been working as a plumber in his father's plumbing business since he was 16. After enlisting, he flew 17 bombing missions over Germany as a tail gunner on B-17s. But on February 4, 1944, during his 17th mission, his plane suffered a fatal hit by enemy artillery. Wounded by shrapnel, he was forced to parachute out of the burning plane into the night sky and was captured immediately when he landed on the ground in Dortmund, Germany.

Upon his capture, he was first brought to Frankfort for interrogation and then transferred, by boxcar, to Stalag Luft VI, far to the north. However, in July 1944, as the Russian front advanced, about 900 prisoners of war, including my father, were put aboard a ship for a 60-hour trip across the Baltic Sea. During the voyage, one of my father's fellow prisoners was so stressed from the conditions that he took a running jump off the ship and was lost at sea. The men were then transported by train and by foot to Stalag Luft IV in Gross Tychow (then in northeastern Germany, now know as Tychowo, Poland).

The conditions at Stalag Luft IV were terrible. The Red Cross reports detail poor sanitation, no proper washing facilities, and grossly inadequate food, clothing, and medical care. There were only enough bunks for about half of the population so the majority of the POWs slept on the floor. During his time at Stalag Luft IV, my father became friends with another American POW who shared his hut. One evening, his friend woke up and went to use the latrine, accidentally exiting the door of the building at an undesignated time. He was shot and killed on the spot. My mother told me that my father maintained his sanity there by planting a small garden with some seeds salvaged from his rations. My father maintained that love of gardening all of his life.

Stalag Luft IV achieved notoriety for another reason. On February 6, 1945, in response to the encroaching Soviet army, about 8,000 prisoners of war, including my father, were forced to begin a march that would come to be known as the "Black March or "Death March." The men were made to march about 20 miles per day during the winter months with barely more than the clothes on their backs. Many prisoners were kicked, bayoneted, or slammed with rifle butts if they did not move quickly enough. They sometimes found shelter in barns along the way, but more typically slept outside, often in the rain and snow. Food was scavenged and often consisted of potatoes that were stolen from farmers along the way. No water was provided so the POWs drank from water filled ditches along the road or melted snow when it was available. Serious diseases were rampant including dysentery, gangrene, typhus, and lice. Some prisoners, who became too ill to continue, were shot and killed by the German soldiers. Hundreds of POWs died during the march. My father was one of the lucky ones who survived, although he lost about a third of his body weight and would later suffer bursitis in his shoulder from being bashed with a rifle butt and pain in his feet from the lasting effects of frostbite.

The men reached Stalag Luft 357 in early April 1945, after marching for two months. However, Stalag Luft 357 was unable to handle the massive influx of POWs who had been moved there from other camps. Accordingly, the Stalag Luft IV POWs, including my father, were only there only about a week when they were forced to continue marching, moving eastward. My father told me that the German soldiers began slowly peeling off at this point, as they knew that the war was essentially over. On the morning of May 2, 1945, as the POWs sat, unguarded, by the Elbe river, British soldiers arrived and they were liberated.

My father harbored no bitterness about these experiences. When he returned from the war, he resumed his work as a plumber, got married, and had children. He lived a very simple life, but one that was marked by kindness, rock-solid strength and integrity, humor, and warmth. Everyone liked my father. When I was young, he never talked about the war. When I asked him about it, he would only say how happy he was to have had the chance to visit Italy and France when the war ended, and how proud he was to have shaken General Eisenhower's hand. I did not hear anything about the harsh experiences detailed here until 2006, when my family took my father on a trip to the then newly opened WWII memorial in Washington. With that inspiring memorial as context, he was willing to answer our many questions.

There is a line in the musical Hamilton about how we have no control over "who lives, who dies, who tells your story." I have the chance to tell this story as a love letter to my father on his birthday. I hope that we will all continue to tell the stories of those who fought this epic battle against fascism. For those World War II veterans still with us, be assured. We will remember.