Three out of every four new mobile phone subscribers are now in the developing world. This monumental shift has created a unique population of hundreds of millions of off-grid mobile phone users who don't have access to basic necessities like energy or water let alone essential services like banking. Thanks to mobile phones however, they have access to a distributed infrastructure through machine to machine technology (M2M) that can enable access to these vital services. That's what new GSMA research is telling us and the implications are too exciting to ignore. 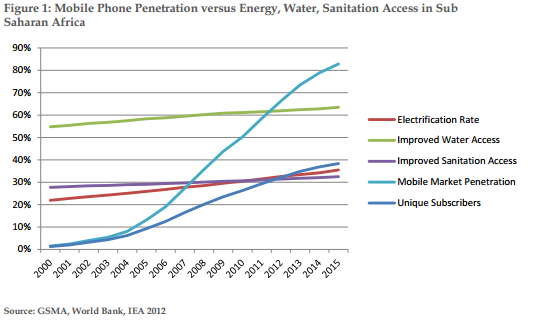 Let's start with the basics. The rural poor lack access to just about everything. From basics like energy and water to inclusion in the financial system their lack of 'connectedness' to the world inhibits their escape from poverty. Until now the solution to this problem was to invest large sums in centralized infrastructure to enable it to extend out to these communities. The problem is this approach is not only top down and ineffective it is really expensive and contributes enormously to problems of corruption, mismanagement, and environmental degradation. But mostly it just hasn't worked.

Mobile phones have famously bypassed traditional infrastructure efforts to enable connectivity to even far-flung communities through the creation of a distributed network of off grid cell phone towers. This distributed infrastructure flies in the face of decades of traditional policy making and its squandered investments. More importantly it offers unique opportunities to change course that entrepreneurs, NGOs, and policymakers must seize.

The foundation of these efforts is being laid by what industry calls Machine to Machine (M2M) technology. M2M refers to the ability of one machine (say your cell phone) to communicate with another (say a solar array) via wireless networks. It provides remote monitoring and operation, data collection and insights into consumer behavior (which ultimately improves product design). But it is the ability to unlock business models that deliver basic services like energy, water, and banking access that is simply staggering.

Suffice to say, the opportunity is real, it's huge, and it's just waiting to be tapped. It's important to note that solar crowdfunding may be instrumental in making it happen. That's because the financial system has been designed for large bulky centralized investments -- not the nimble, small-scale, distributed investments of the future.

To this clear and present opportunity can now be added clean water access. GSMA estimates 165 million people with access to a mobile network also lack access to clean water. The value proposition is similar to energy but it relies not on the towers themselves, but on the financial inclusion the services provided by their mobile phones represent. Let me explain.

Currently 2.5 billion adults around the world lack access to the financial system. That means they can't create savings accounts, they can't take out loans, and they can't make payments for basic services unless they have cash on hand. A solution is 'Mobile Money' -- money loaded onto cell phones which the poor can use to pay for their use of services like clean energy and clean water. Mobile money is catalytic because it provides payment flexibility and built in financing through 'pay-as-you-go' business models. (Check out Simpa's radical affordability approach which leverages M2M technology on their solar installations to enable their customers to pay with their cell phones.) These mobile money platforms are still nascent but already M-Pesa in Kenya has enabled over 15 million people to access the financial system and accounts for $12.3 billion in transactions.

Just imagine if India unlocked mobile money for 1.2 billion people. Or if it then combined that platform with financing for social entrepreneurs who provide distributed energy and water services to the rural poor. The world of opportunity this distributed future would open for those failed by business as usual is limitless. Mobile phone infrastructure is our starting point, whether we decide to use it, and where it takes us, is up to us.