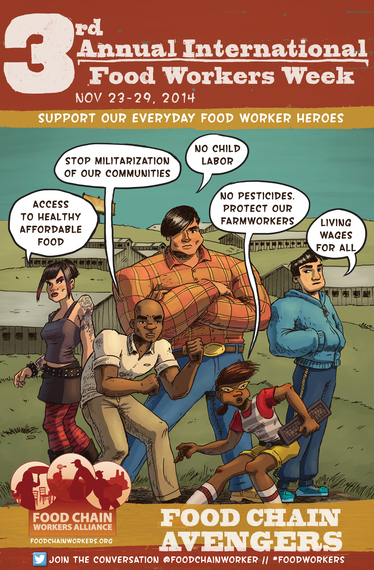 These days, super heroes are all the rage, it seems. Most have supernatural powers to do good in the world. But we have people in our food system who don't need super powers to do good in the world - they're our everyday food worker heroes. And so for our 3rd annual International Food Workers Week, November 23-29, 2014, we're celebrating them with a series of videos called Food Worker Heroes featuring one worker per sector of the food chain and a new Food Worker Heroes Tumblr blog!

These food worker heroes are people like Martha, a Los Angeles-area Walmart worker and leader of the Organization United for Respect at Walmart (OUR Walmart). Martha is going on strike on Black Friday because she and her co-workers are tired of Walmart retaliating against its own employees for speaking up and organizing for $15 per hour and full-time work. Martha says, 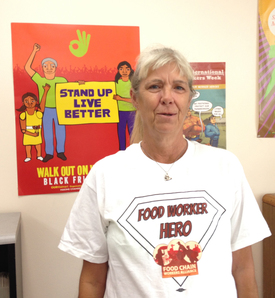 "I get a lot of satisfaction in helping the customers find and locate products that will help them and benefit them. I'm proud to be a part of OUR Walmart. Living in poverty is no fun. I would love to see my co-workers and workers everywhere off government assistance once and for all. We can all raise the standards for everyone."

Another food worker hero is Gualberto, a Mexican immigrant farmworker in upstate New York and a member of the Rural and Migrant Ministry, "a group that fights for better conditions for farmworkers", he says. Gualberto explains,

"I am proud to be one of the 20 million people who work in the food system in the U.S. because everyone enjoys the fruit of our labor, from the richest person to the poorest. It's because of our labor that we are all able to eat."

Constantine is a food worker hero in the service sector. He is a street food vendor in New York City, originally from Egypt, and a leader of the Street Vendor Project that unites all street vendors in the city. Constantine explains that one of the challenges for street vendors is "you have to deal with the authorities. A lot of times there's harassment and excessive force." He adds, "I'm most proud that the public loves us and supports us."

Pedro, originally from Mexico, is a food worker hero who has worked at Farmer John's, a meat processor in Los Angeles, for over 20 years. He says,

"My job is very hard. You have to do it fast because the line don't stop, but at the same time, I enjoy doing it. Every day we learn something, and I share experiences with my co-workers. We help each other."

Pedro is a member of the executive board of the United Food and Commercial Workers union Local 770. He explains, "I talk to my co-workers about how important it is to join the union because we send a message that the company has to respect the workers."

And last, but not least, is Bakari, a warehouse worker outside of Chicago and a member of the Warehouse Workers for Justice (WWJ). "In all my experiences working in warehouses and the food industry, I suffered some discrimination. We need health benefits. We need to pay bills. It's hard with what the companies pay you." Bakari says he's glad that there are organizations like WWJ and the Food Chain Workers Alliance. "We are all one people. We're just striving for fair working conditions."

So this International Food Workers Week, which is every year around Thanksgiving, you can celebrate Bakari and the millions of other food worker heroes in the U.S. and around the world in many ways:

• Help educate your family and friends about the importance of food workers in our daily lives! Our IFWW menu lists a number of videos to watch, including our Food Worker Hero series and the farmworker documentary "Food Chains," out in theaters and on iTunes starting November 21.

• Submit a photo or video on our Food Worker Heroes Tumblr blog - it can be your favorite local farmer or restaurant server. Really anyone who works in the food system who you think is a food worker hero! 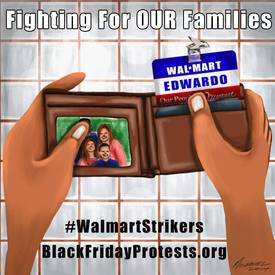 • Go out on Black Friday and support the courageous OUR Walmart workers going on strike! They and supporters will be out at 1,800 stores around the U.S. Check out blackfridayprotests.org.

• Share our comic book "Food Chain Avengers," which tells the story of 5 young food worker heroes as they battle the evil Sunshine Farms corporation and fight for justice in their hometown (see image above of the Food Chain Avengers).

Jose Oliva has been the Associate Director of the Alliance since August 2013. He is from Xelaju, Guatemala. Jose founded the Chicago Interfaith Workers' Center in 2001 and then became the Coordinator of Interfaith Worker Justice's National Workers' Centers Network. In 2008 he went on to run the Center for Community Change's worker justice program. From 2009-2014, Jose held a number of leadership roles at Alliance member Restaurant Opportunities Centers United, the national organization of restaurant workers. He also served as Board Chair of the FCWA Board of Directors from 2010-2012.

Go to our website foodchainworkers.org to find more ways you can support our everyday food worker heroes. There might even be a local event in your city that you can join!