"Yet evil is an essential adjective, an absolutely necessary category of human thought. Human consciousness cannot function qua human without utilizing this category of thought. But as a category of thought, evil is not a product of nature, psychical or physical or metaphysical; it is a product of consciousness. In a sense, evil comes into being only when someone makes the judgment that some act or thought is evil. Until that point, there exists only the 'raw fact' and the pre-ethical perception of it." ― Murray Stein, Introduction to "Jung on Evil"

"The world sees Europe as the continent on whose soul the shame of the concentration camps grew, just as Europe singles out Germany as the land and the people that are enveloped in a cloud of guilt; for the horror happened in Germany and its perpetrators were Germans. No German can deny this, any more than a European or a Christian can deny that the most monstrous crime of all ages was committed in his house. The Christian Church should put ashes on her head and rend her garments on account of the guilt of her children."―Carl G. Jung, "Nach der Katastrophe"

A woman I know (let's call her Cora) put down her animal companion this past week, a blind, deaf Great Dane (let's call him Wotan), acquired from a shelter here in Florida. Wotan was, perhaps, the love of Cora's life.

The dog bonded with Cora, who rescued him, fed him, and attended to his special needs, but never with the other members of his and Cora's little "tribe," her husband, children, and small grandchildren. To these others, Wotan became a clear and present danger. Eventually, no "other of her tribe" was permitted to approach Cora without Wotan's threatening her or him with physical harm, and he was a very large dog.

Cora's husband, finally, put his foot down, and the woman who had rescued Wotan as a terribly handicapped puppy, and whom the dog trusted, alone in the world, chose to end his life.

The moral ramifications of this brief story are deep and many, at least to my mind. So many of the initial decisions, on the part of the original breeder, the shelter, Cora, and Cora's family, would not have been my own decisions (though, given slightly different circumstances, I can see that I could have made, will always be capable of making, similar decisions).

But, as it happened, circumstances tangled and then were tangled again by human hands and minds: Wotan became, like the Frankenstein monster, a dangerous innocent, a creature without the burdens and benefits of more rarefied consciousness . . . and, in the process, Cora's shadow self. Wotan loved only Cora, and would not, could not permit anyone else to approach her, even those of her human family clearly marked, for Wotan's intelligent nose, as "Cora's."

On every level I can imagine, Wotan's is a sad story. 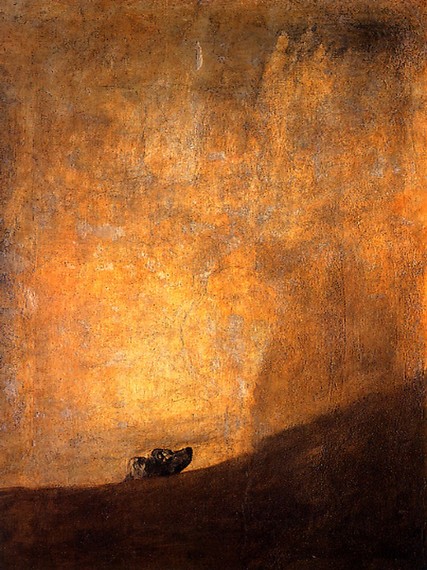 Had the breeder of Wotan and his siblings not spared him, deaf and blind, at birth, and deposited him at the animal shelter, where others fed and cared for him, he would not have come to live with Cora. He would not have known human love nor, perhaps, experienced fierce canine love for an other; nor would Cora's family have come to know terror in his presence.

Cora, of course unconscious on many levels, herself (are we not all?), admits only, and simply, that she has now "lost the love of her life." She has, certainly, put down one of her fiercest shadows (in the Jungian sense), having (briefly) embraced him fully.

How "responsible" is Cora for committing an evil act? For unleashing a demon in the midst of her human family? For bringing "Wotan," Carl G. Jung's shorthand for the demonic, repressed shadow side of the Nazis, into the midst of unsuspecting innocents?

How to parse and weigh, in any (as a result of any) of our human acts, evil?

Carl G. Jung writes: "When, for instance, belief in the God Wotan vanished and nobody thought of him anymore, the phenomenon originally called Wotan remained; nothing changed but his name, as National Socialism has demonstrated on a grand scale. A collective movement consists of millions of individuals, each of whom shows the symptoms of Wotanism and proves thereby that Wotan in reality never died, but has retained his original vitality and autonomy.

"Our consciousness only imagines that it has lost its Gods; in reality they are still there and it only needs a certain general condition in order to bring them back in full force. This condition is a situation in which a new orientation and adaptation is needed. If this question is not clearly understood and no proper answer is given, the archetype, which expresses this situation, steps in and brings back the reaction, which has always characterized such times, in this case Wotan.'"

Wotan may, on occasion, be "put down." However, in Carl Jung's estimation, he never disappears, but remains, in such cultures as the German, and the American, evergreen, simply in temporary suspension: "It was not in Wotan's nature to linger on and show signs of old age. He simply disappeared when the times turned against him, and remained invisible for more than a thousand years, working anonymously and indirectly.

"Archetypes are like riverbeds which dry up when the water deserts them, but which it can find again at any time. An archetype is like an old watercourse along which the water of life has flowed for centuries, digging a deep channel for itself. The longer it has flowed in this channel the more likely it is that sooner or later the water will return to its old bed. The life of the individual as a member of society and particularly as a part of the state may be regulated like a canal, but the life of nations is a great rushing river which is utterly beyond human control, in the hands of One who has always been stronger than men. [...]

"Political events move from one impasse to the next, like a torrent caught in gullies, creeks and marshes. All human control comes to an end when the individual is caught in a mass movement. Then, the archetypes begin to function, as happens, also, in the lives of individuals when they are confronted with situations that cannot be dealt with in any of the familiar ways. But what a so-called Fuhrer does with a mass movement can plainly be seen if we turn our eyes to the north or south of our country." (C G Jung, "Wotan," Neue Schweizer Rundschau, Zurich, March, 1936).

And I would add, to the north, south, east, and west of my own country, America, in the first quarter of the 21st Century, where Wotan has, once again, been summoned forth by the mob, out of our rich and mercurial and amoral collective unconscious. 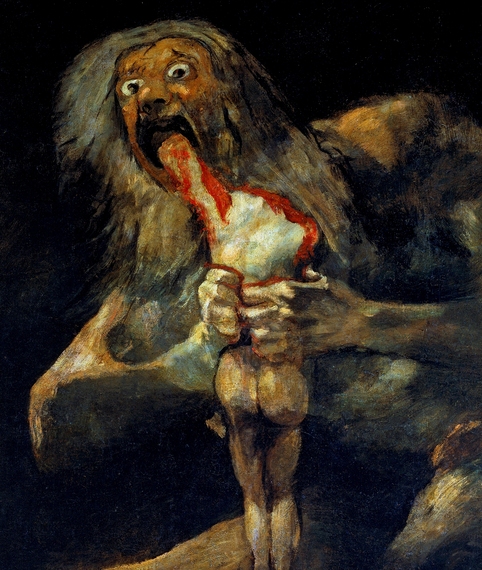 This past year, and over the entire course of the U.S. presidential campaign, we have all borne witness, whether conscious, less conscious, or unconscious, to yet another dangerous dance with Wotan, with the archetypal other that I believe sleeps just beneath the skin of every Homo sapiens; and, the less "sapiens," the more lightly Wotan, or Trumpism, sleeps.

My reading, my study of evil, is neither long nor deep, I admit. Half a century is not long to be conscious, though I read The Rise and Fall of The Third Reich at age eleven, and wrote one of my first long school essays on Hitler, and the rise of Nazism in Germany, in Middle School. (My childhood, in post-war southern Europe was not the stuff of musical comedy.)

My family--Western, college-educated, two generations not touched directly by the violence of war--has had the luxury of both consciousness, leisure, and freedom from devastating want, and so, briefly, has been able to contemplate the question of evil.

So, to an extent conscious, and to an extent sentient--for the blink of an eye--here I am contemplating with you Jung, Cora and Wotan, Goya, and Trump, before Global Warming throws my species, all species, under the bus that is unconsciousness (Global Warming which, I hasten to add, is the final "unconscious creation" of Homo sapiens).

In this realm of such weak light and such vast darkness, does it matter that (if, and when) we unleash Wotan on our children; that we, however few of us and for however brief a time, unshackle Trump, and his racist, misogynist, incestuous, bigoted, poisonous energy on our neighbors?

What I have to say, in this very small essay is just this: yes, it does matter. We must, those of us who are able, struggle to remain largely conscious, and struggle to see, to identify, to name our demons in order to disarm them and transform them, for as long as we can, wherever we can, whenever we can.

At the shelter, Cora must struggle to see Wotan for what he truly is, even as a helpless puppy: potential havoc-to-come, an embryonic demon, in her very small and humble human home.

And, in 2016, in America, we must call Trump what he truly is, our frightful shadow, and we must acknowledge and "illuminate" him as such, and warn our children of his perpetual existence--in many, many guises--throughout human history, past, present, and future (such as it is).

By any name--Wotan, Hitler, Pol Pot, Trump--he is alive and well in the House of Mankind, and we must "put him down," as we can, according to our lights, again and again and again, while we have the ability to do so.

We must, at the very least, point to him, call him by his name, and exclaim, till we are hoarse: "Evil. Incarnate. Again."

1) Much of my thinking above is influenced by: "Jung on Evil," Selected and Introduced by Murray Stein, Princeton University Press, Princeton, NJ, 1995: http://press.princeton.edu/titles/5811.html