Forty-seven years ago, give or take a few months, my mother gave birth to me at the ripe old age of 43. I say this because having a child when you were of that age back then was hardly as chic or fashionable as it is today. My birth was heralded as an unfathomable feat in conception, being that not only were my parents considered "elderly," but I also turned out to be a girl -- the ONLY girl amid three brothers. The youngest being 16 at the time. Life was good for our family until suddenly, it wasn't.

Just two months after my birth and right around Christmas, my 19-year-old brother Tim was killed in Vietnam. Instantly, life was irrevocably changed forever. The house that once was a hub of friends, parties and general merriment became a place of broken dreams and deafening silence. 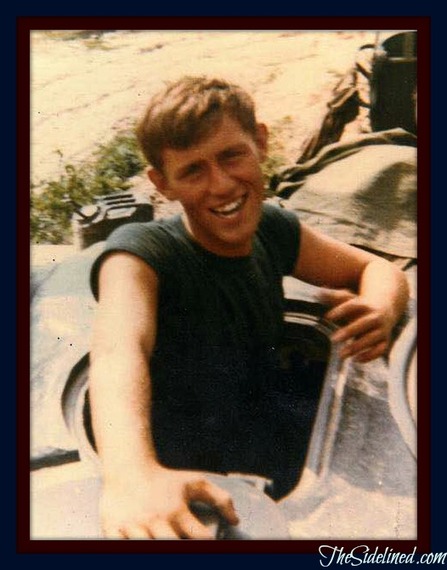 You know the home improvement shows with the "Before" and "After?" Well, my brother's subsequent death became a defining moment is our family's history. There was definitely a line drawn in the sand to indicate all events chronicling our lives. It was a steep price he paid for freedom, but it was also a heartbreaking void we gained in losing him -- all of us, including aunts, uncles, grandparents and cousins. 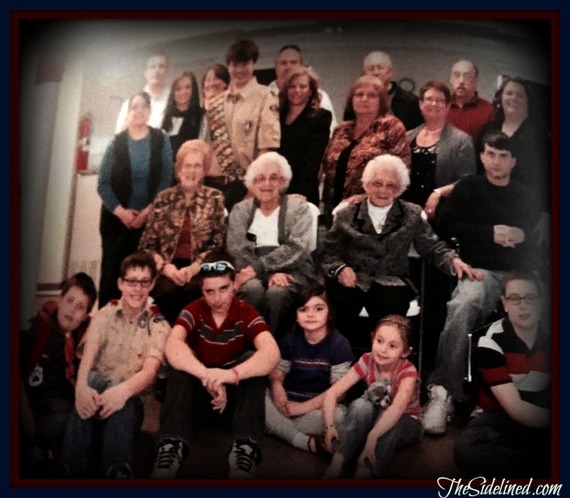 To fill it, my parents created this "ghost" that sat at our kitchen table. He was ever-present in anything we did or talked about at dinnertime. No matter how many A's I got or whatever I did, his feats were always so much better. Growing up, I got to hear all the stories of his impish deeds so many times I could recite them by heart, as if I had been there myself. My parents, in desperately wanting to keep his memory alive (and who could blame them?), lived in the past with this "ghost" whom I never met. He was impossible for anyone to live up to. Today, I get it. When I was a kid... not so much.

Shortly after Tim's death, a member of the Gold Star Mothers in Hancock County approached my mother. For anyone wondering, a Gold Star Mother is any mother who has had a military son/daughter missing or killed in action. My mother was reluctant to join at first, but she did, and has remained one ever since. She was even elected State President of the Ohio and Kentucky Chapter of Gold Star Mothers for several years, and journeyed to Loudonville, Ohio many times to fulfill her duties there.

As a child, I used to attend meetings with her and was amazed at formality used to conduct their meetings. Before the Hancock County Chapter formally disbanded a few years ago for lack of new members and health reasons, I frequently chauffeured my mother to these meetings. Only five in number and ranging in age from low 80s to early 90s, these women still dutifully performed the rituals of the meeting as stated in the formal handbook, often referring to each other as Madame President and Madame Secretary, etc.

Part of my mother's service as a Gold Star Mother has been to place the wreath at our local cemetery every Memorial Day. She has been performing this duty for 47 years now. Though she is 91 years old and walks with a walker, she has never missed a Memorial Day Service since my brother's death -- nor have I, for that matter. Struggling up to the podium, she still places that wreath with tears in her eyes for what might have been and with hushed words spoken only for The Fallen to hear. 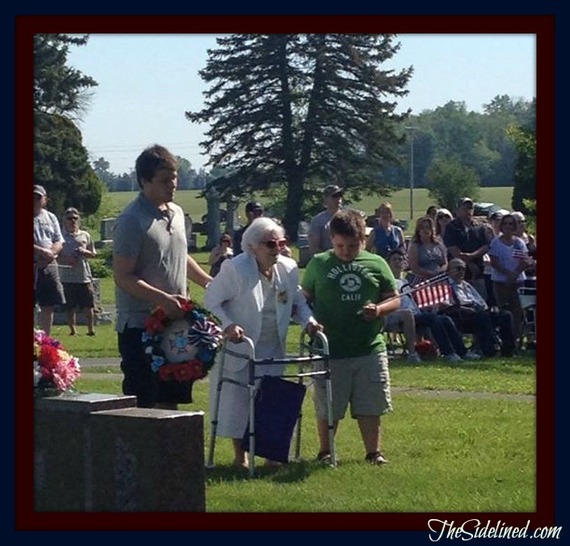 In our world today, sports players, celebrities and politicians receive all the accolades. Occasionally, you will find a soldier thrown into this media mix, but it is rare compared to the millions who have fought and those that continue to fight for our freedoms on a daily basis.

People burn or walk on the American flag in the name of freedom of speech without ever really considering the sacrifice it represents. Many tend to forget the families that give daily in the absence of loved ones fighting bravely on foreign soil, and quickly dismiss the men and women who have died so that they could live and speak freely. It is our soldiers who should be honored as the true heroes of our country. Because of them, we have the freedoms we do today. We owe our military men and women and their families a debt which can never be repaid. 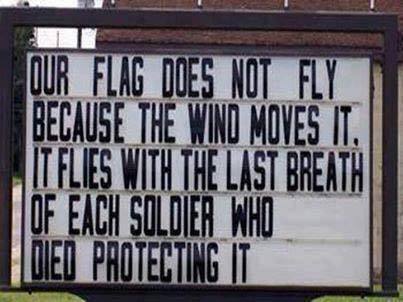 Maybe it was because my parents were of another generation, or because of the loss I was so "fortunate" to witness firsthand, but I was, nevertheless, brought up to be a proud American. I grew up saying the Pledge of Allegiance, with "under God," every day at school. The flag was flown in front of our house every day until it retired the proper way, and a brightly-colored new one was raised in its place. I was taught to stand at the passing of the flag with my hand solemnly over my heart and to take my hat off in its presence. I was also taught to sing "The Star-Spangled Banner" proudly -- never mind if you can't carry a tune. Lastly, I was lectured to never talk during the national anthem. EVER.

Sleeping in or being sick on Memorial Day was never an option. The Memorial Day service was mandatory. It was called respect, something that seems to be absent quite a lot these days. 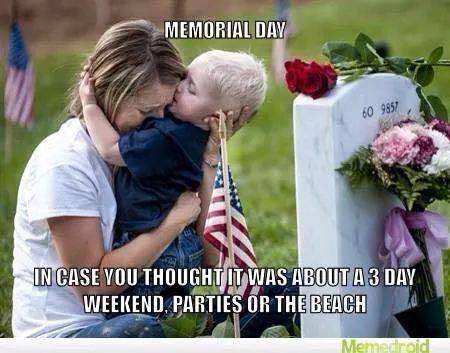 A few years ago, as the flag was being raised at a local football game, my son and his friend were standing in front of me, and the friend started to make fun of a man for singing loudly during "The Star-Spangled Banner."

I promptly told the boy that the man singing was my brother, and that the reason, I believe, he sings so loudly and proudly is in hopes that his voice reaches his big brother in Heaven, who was killed in Vietnam. He is proud of him and his country. The boy then shut up and seemed genuinely embarrassed by his remark. It is our duty, as parents and American citizens, to teach future generations the importance of patriotism and the true definition of sacrifice.

This Memorial Day, my entire local family (my mom, my 97-year-old aunt, my brother, my cousins and their husbands, my husband and children) and I will once again trudge down to the cemetery to pay our respects, as most of us have for the past 47 years, give or take a few years for some.

While many choose to sleep in on this holiday, the men of the VFW Post will have already made their rounds to the various local cemeteries to salute the dead. The band will march from the local high school to the cemetery, and the weather may be bitter cold, or so hot a band member passes out from the heat.

The aging men of the VFW Post will march in with the band. The Boy Scout Pack 318 will raise The Flag during the National Anthem. The band will pay some patriotic songs, and my mom will place that wreath and try not to cry as my family watches from, "Our Spot," the place my brother was laid to rest all those years ago.

There will be a short speech by a chosen speaker followed by a prayer. Then will come the order as children expectantly cover their ears, "Sergeant of Arms, Salute the Dead!" Three shots will be fired, followed by an eerie silence, until reverently, two band members begin to play a hauntingly echoing rendition of Taps.

Afterwards, a silence will once again fill the cemetery, where only the rustling of the wind picked up by the microphone might be heard. It is then I might hear the sniffling of a brother, aunt or cousin, and if I were to look up, I might see their tears -- but I don't. I am usually hiding behind my sunglasses and wiping my own.

Though usually not a crier, I am on this particular day. It never fails, no matter how hard I try. I will shed silent tears behind those sunglasses for my mom and dad who lost a son; my remaining brothers who lost a sibling; my aunt who lost a nephew, my cousins who lost their protector and friend, his classmates and friends who still miss him today; his Army buddies who frequently called my mom after they got home and didn't get the hero's welcome they deserved; and finally, I will cry for my own loss of never getting to know this enigmatic big brother, so full of life, and I will mourn the devastation his death left in its wake. 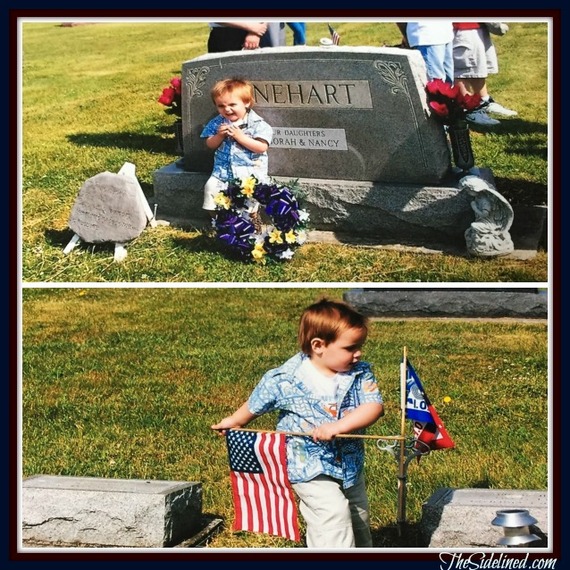 The pain of what our soldiers and their families endure is very real. The ache of the loss never goes away, and sometimes it consumes a family entirely. The "ghost" that sat at our kitchen table was fueled by the culmination of memories left behind from a life cut too short, and my parent's feverish attempts to keep Tim alive, lest anyone forget.

My father passed away in 1995. I would have liked to say we were close, but he was rather aloof. My mother said the only time she saw him cry was the day they went to claim my brother's remains. Emotionally stunted from this tragedy, the only time he told me he loved me was the day I graduated and when he danced with me at my wedding. It is my belief that my brother's death haunted him until the day he died. 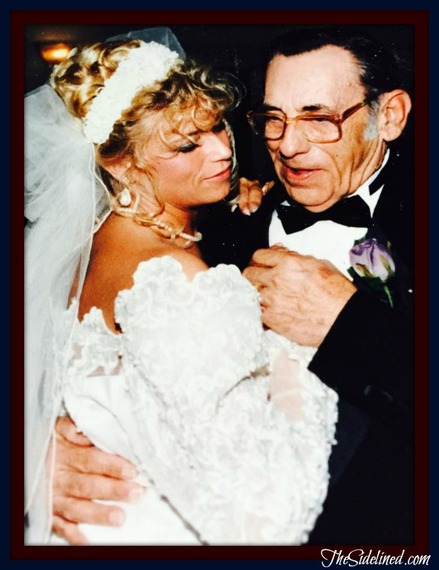 My mother is one of the toughest women I have ever met. It took me becoming a parent to realize this. She has overcome many hardships in her lifetime, but nothing compares to losing a child. One day, we had a conversation about death and getting older, and she stated she wasn't afraid, "Every day brings me closer to seeing Tim again." 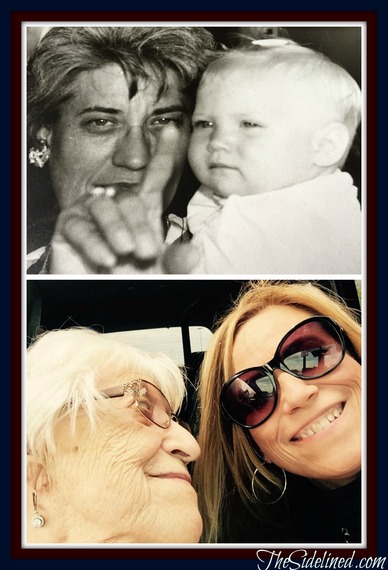 It is a tradition in our family that we all have a cookout after the Memorial Day service to honor my brother and his comrades who have fought and died for this great country. Although the venue has changed more than once, I have had the privilege to host for quite a few years now. It is a much anticipated event. Over the years, friends and new family members have been added, new generations born, but every Memorial Day you will find us all together to celebrate, not death, but life. 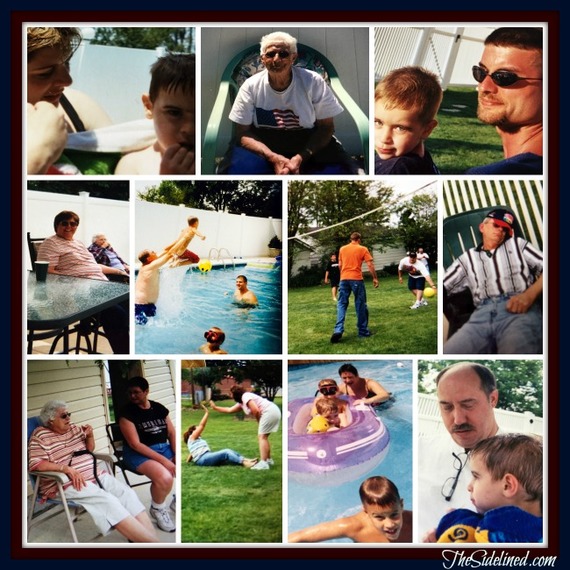 This is just the story of my family's loss and the difficulty of being born amidst such turmoil. There are so many more stories out there. Your freedom to do and say what you please comes with a price, and it isn't just the soldiers who sacrifice, but their families as well. Teach your children respect, honor, and love of country by displaying it yourselves! Treat our flag with the respect it deserves! Put your hand over your heart! SING the Star Spangled Banner! Attend Memorial Day and Armed Forces Day! And above all, THANK your military men/women and their families for their sacrifice! FREEDOM IS NEVER FREE... 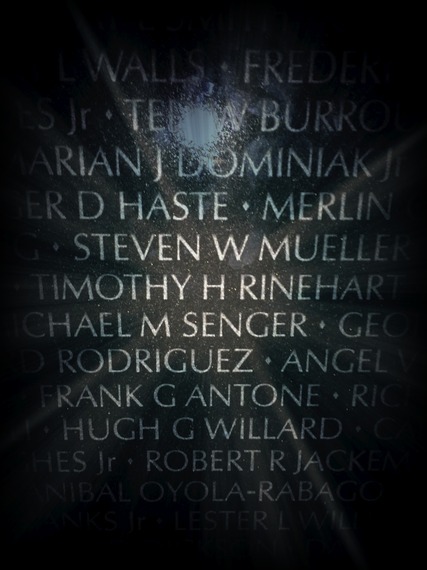 Gifts For Your Runner Friend That's Always Talking About Endorphins