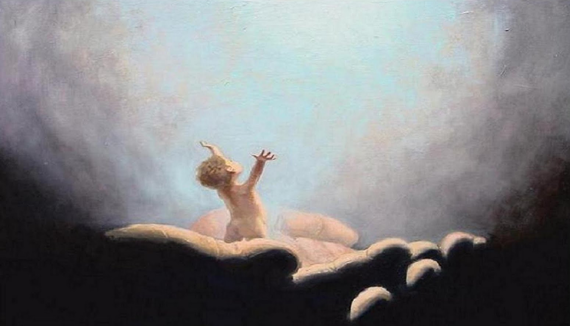 I've been a guest speaker at a lot of different churches lately, mostly Unity and Centers for Spiritual Living, talking about "The Heart of the Matter" - a two-part series on the nature of the ego.

The message has been uniformly welcomed and (apparently) enjoyed, even though in part two I get pretty doggone down and dirty about what I call the "spiritual ego" -- you know, that part of us that thinks well of itself for going to church on a pretty spring morning when we could be out playing golf. That voice inside our head that tells us we're better, wiser, more humble, more pleasing if we believe in a deity in a certain way ... better than people who worship deity in another way ... certainly better and wiser than the people who fail to worship at all.

Part two is all about how the human ego, which arises from our sensory perception of separation from others and the divine, is strengthened by pursuing "spirituality."

"We don't know who we really are," I say. "We think we're human beings. We identify with our name and face and sexual orientation, our weight and IQ and professional status, our address, FB account and socioeconomic bracket--and yes, our religious/spiritual beliefs and denominational label.

"We pay lip service to unity, all the while unconsciously carving ourselves into pieces by speaking words, saying prayers and singing songs that clearly indicate we believe God is separate and outside of us, that heaven is better than Earth and that spirituality is something we can pursue--a meaningful characteristic we can adopt that will make us better people.

"And yet God isn't outside us, heaven isn't a place and we aren't really 'people.' It's all an illusion. The world and our bodies aren't even physical. They're interpenetrating fields of intangible energy/information that appear as if they were physical."

I watch the nodding heads, as I talk. The earnest faces. I say, "In truth we are the vast I AM itself--Source Intelligence animating 'form' on a thrill ride across Eternity. Being 'human' is a story in a dream. Spirituality is a concept. Being a 'spiritual human' is a story within a story -- a mental game of identity that keeps us spinning our wheels for years ... for lifetimes ... pursuing the unattainable goal of becoming what we already are through improving the illusion of what we are not."

At the end I stress the subtlety of our stories - how easy it is to get caught in human/ego beliefs about how things are ... how easily we get lost in delusion ... how important it is to be critically aware of words of separation that create more story ... taking us deeper into fantasy, away from who we really are.

Then I sit down.

My talk is followed by applause. Sometimes even a few whoops of appreciation. And then ... the dream proceeds. The collection is made, the offering is blessed and, almost always, the service is closed with some variation of the Lord's Prayer: "Our Father, who art in Heaven, hallowed be thy name. Thy kingdom come, thy will be done, on Earth as it is in Heaven ..."

And I want to leap to my feet, spin around, and scream, "THIS is exactly what I was talking about just five minutes ago! This is what traps us!

"Can you hear what you're saying? God isn't a 'He' or a father. Those are stories. He isn't in Heaven because heaven isn't a place. It's a state of mind that comes with the awareness that we are the divine. His will is not separate from our own. Jesus said it loud and clear. He said it using the language of the times--language that could be understood.

"Jesus didn't have quantum physics revealing the true nature of our reality to the world. He didn't have psychology and words like 'consciousness' in his vocabulary. He spoke in parables--stories--because that's what could be heard at the time! He said, 'My Father and I are one.' And people tortured and killed him for saying it.

"But that was two thousand years ago. It's time to wake up out of the story and come home!"

But I don't do it. So far I haven't had the cojones.