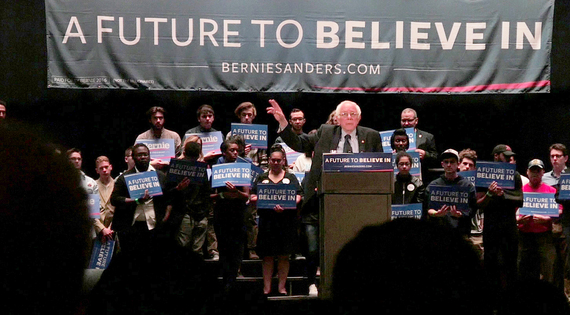 Our focus has shifted!

New York's primary has indeed harmed Bernie Sanders' campaign, as it has broken a sequence of victories, and deflated supporters' enthusiasm before the next round of 5 state primaries the following Tuesday. The media keeps reporting that a Bernie victory is all but impossible at this point, which sounds convincing but not quite true. The California primary at the very end of the cycle packs 475 pledged delegates. Right now Hillary leads Bernie 1666 to 1359 among pledged (elected) delegates, which means a gap of 307 delegates.

Assuming the rest of the races between now and the California primary are split evenly, or close to evenly, between Hillary and Bernie, a win of 65% in the CA primary would make up the gap! It has been reported Clinton's campaign has cut back and is not airing any ads in the smaller states at the moment as their fundraising is dwindling. If Sander's campaign focuses almost entirely on CA, it is likely he could see such results. Anyone who would claim that this is not a possible scenario is either ignorant, or intentionally misleading.

Nevertheless, it is important for the Sanders campaign to redraw the focus to emphasize the building of the progressive movement and increasing its impact and influence, rather than just electing Bernie for president, in order to counter sagging enthusiasm due to voters' perceived inevitability of a Clinton victory. The results of such focus change may not only be the continuation of the most vigorous political campaign in presidential primary history, but a possible win for Bernie in the primaries by June, as a byproduct. This change of focus would also highlight the difference between Bernie's selfless run for office for the purpose of reform, vs. Hillary's run for office for her own political gains and interests.

Our goal has not changed at all. We are still working on changing the political system to eradicate unaccounted big money in politics. This has been at the very root of all other political battles. As an environmental and political activist I have come to realize that each such battle, around each issue, is an uphill battle against the odds, due to the politician's reliance on campaign finance fundraising from the corporate world and the wealthy.

Be it a battle on Fracking, Social Security, Environmental pollution regulations, meat production regulation and standards, or minimum wage, each is countered by powerful money laden lobbies, dwarfing any influence from the general citizenry, thus significantly tilting the scale in their favor. As long as that remains unchanged, no major dramatic changes can be expected in any of these directions. Currently the battles are about the periphery, and about tweaks and incremental improvements to the existing status quo. That type of change, when we are facing a potentially cataclysmic Global Climate Change, is simply not a luxury we can afford ourselves any longer.

So, the goal is still to bring on a political revolution. This best case scenario is to start it right now by electing Bernie as president, but even if that eludes us, we still have the power to effect change by voting in the primary, and not just giving away our voice to the front runner.

Demonstratively Hillary has shifted her stated position iteratively on a number of occasions closer and closer to Bernie's original positions throughout the campaign, as she realized where a significant portion of the Democratic voters is on the political map now a days. Of course once in office those positions are not binding and she may do as she likes. Still it does indicate she understands where the voters are at, and who she has to woo, and that by itself is political capital. We hold that capital collectively as long as there is a leader such as Bernie who can give expression to it.

For this reason we need to keep pushing the revolution forward, and campaigning for Bernie, now more than ever! We cannot despair, or throw our hands in the air now, after millions have given their time, energy, and money, towards this campaign. We need to make every effort to strengthen his position, even if it were impossible to elect him to office. At the very least, it will demonstrate to the powers that be where the Democratic voters are at, and move Hillary to press changes to the Primary election system, the DNC, and the DCCC currently favoring establishment candidates. A strong showing for Bernie will also move her to change the party platform to incorporate progressive agenda, which is far from binding, but it would be one more hurdle to blatantly ignore or contradict party platform with any action.

One other aspect that is worth noting is that the campaign process itself is an essential element in building up the movement. With each canvassing contact, and each phone banking call, the data in the Sanders database is improving. Building this asset is of extreme importance, as it will allow the movement to assemble its network of progressives and further mobilize them around other elections, and individual issues. This requires the kind of investment only a political campaign of this magnitude can afford. For this reason alone it is essential to keep running the campaign in all states as long as possible and with as much vigor as possible, regardless of Bernie's chances for the presidency!

So, put on your Social Media helmet, and your canvassing shoes, or take out your wallet, and let's keep fighting this battle! There is nothing more essential than this as far as American politics is concerned right now.