By Stephanie K. Meeks, President and CEO of the National Trust for Historic Preservation 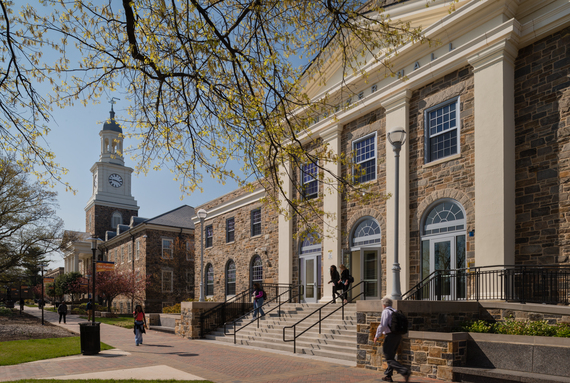 This morning, I was proud to announce that Morgan State University in Baltimore, Maryland’s largest historically black university, is the National Trust for Historic Preservation’s newest National Treasure. We are including Morgan State in our signature initiative at the Trust in part because of its breathtaking campus, which is suffused with historic buildings that can help the university flourish into the future. And this designation also reflects our strong conviction that Morgan State - and all of the nation’s historically black colleges and universities (HBCUs) - tell an important and often overlooked American story that should be told.

For nearly 150 years, generations of students have been inspired by the remarkable beauty and variety of Morgan State’s landscape. Look around the grounds and you can see architectural styles ranging from Classical to Italianate, Modern to Brutalist. Many of these buildings were designed by pioneering and celebrated African-American architects - men like Albert Cassell, Hilyard Robinson, Louis Fry, and Leon Bridges.

Each of these buildings is historic on its own, but their sum is even greater than the parts. Together, they helped to foster the rich history, culture, and traditions that make up Morgan State. Since 1867, young people have come there to learn about the world, awaken their creativity, and choose the path they want to pursue through life.

HBCUs like Morgan State show us how, in the years after the Civil War, and even in the face of great challenges and persistent discrimination, vital institutions of learning arose to help African-Americans pursue the education they had been long denied. That is why we named HBCUs to our annual list of America’s 11 Most Endangered Historic Places in 1998, and why we are working with leaders in Congress to get Historic Preservation Funding for HBCUs reauthorized. This fund has invested more than $61 million in the restoration of historic buildings on HBCU campuses between 1996 and 2009.

Morgan State joins another HBCU where we are working - Howard University in Washington D.C. - whose historic Founders Library is another National Treasure. In its halls, brilliant legal minds like Charles Hamilton Houston and Thurgood Marshall forged the strategy that made Brown v. Board of Education a reality. And the library continues to inspire some of today’s most dynamic and provocative thinkers, including Howard alum Ta-Nehisi Coates. When asked why he wrote the 2015 National Book Award-winning Between the World and Me, Coates said: “I had a memory of myself as a young person, sitting in the Founders Library at Howard University and reading Baldwin’s Fire Next Time cover to cover. I wanted a book that a young person could do that with.”

As Coates’ quote attests, HBCU’s don’t just tell an important story about our past. They are crucial to our present and our future. According to a 2011 essay in Black Enterprise, HBCUs represent only about 3% of American colleges, but they produce nearly one quarter (23%) of all black college graduates. Half of the nation’s African-American teachers, 40% of African-American health professionals, and 60% of America’s black engineers are all trained at HBCUs. A century and a half after they first emerged to redress a systematic wrong in America’s higher education system, these colleges remain a critical seedbed of opportunity, achievement, and equality in America.

For all of these reasons and more, we are delighted to partner with Morgan State to help craft the next chapter in their story. Often our National Treasures are facing a serious threat, but at Morgan State, we instead see an important opportunity - to demonstrate how historic preservation can be a springboard for growth, rejuvenation, and revitalization. As such, we will work with the university to develop a preservation plan that stewards the many remarkable older buildings on campus, while planning wisely for the future.

At the National Trust, we strongly believe that older buildings should not just be trapped in amber, or left to gather dust behind a velvet rope: They should be active and fully engaged in the life of the community. Working with Morgan State, we are going to help transform their many historic assets into 21st century living and learning spaces, while maintaining their distinctive character.

On top of saving a beautiful campus, we see all of this as part of our important work to expand the scope of historic preservation in America, so that it reflects the true diversity of our nation. As Morgan State’s motto so well puts it, HBCUs are “Growing the Future, Leading the World.” With that in mind, we look forward to working with Morgan State, Howard, and other HBCUs across America to save the cherished places that define their past, while crafting a more inclusive foundation for the future.