Pity those poor politicians who want to cut Social Security benefits by changing the way cost of living adjustments (COLAs) are calculated.

They want to be counted as among the "serious people in the room." You know, the folks who are willing to "compromise" the well-being of everyday Americans and vulnerable seniors and people with disabilities to claim credit for striking a "grand bargain."

But they're in a bind. Most, including President Obama and Speaker Boehner, have acknowledged that Social Security has not and cannot contribute a penny to the federal debt. Nearly all are on record as promising that they will never, ever cut the benefits of today's seniors and people with disabilities. They've seen those pesky polls showing that the American people, Republicans, Independents and Democrats, alike, strongly oppose benefit cuts. Constituents understand that playing around with the way COLAs are calculated is a benefit cut, pure and simple. They state their opposition in polls; some have expressed their opposition by calling or even paying visits to the offices of those elected to represent them.

Yes, pity those poor politicians. They don't want to be held accountable, they certainly don't want to lose the next election, but they don't want to take their constituents' side in opposition to Wall Street CEOs, elite media, and others pushing for bad policy. These politicians sorely need a "way out" and we are pleased to help by summarizing five lessons from our path-breaking new book, "Betraying Seniors and People with Disabilities: A How to Manual for your Garden Variety Politician."

Lesson Number One: Don't even think about telling the truth. Fact is, the chained-CPI cut you want to push past the American public is a benefit cut, and a pretty big one at that, about $112 billion right out of the pockets of Social Security beneficiaries over the next ten years. It's hardest on persons most dependent on Social Security's modest benefits, averaging just $13,600 . It would lower the COLA gradually but inexorably, year after year -- a cumulative loss over 30 years of $28,000 for a 65 year old retiree who lives to 95 and receives an average Social Security benefit, or a 30 year old disabled war veteran who reaches age 60. That's a lot of money and we strongly urge cautious politicians to steer clear of these facts. Certainly, don't tell them that your vote implies that their current benefits are higher than you think they should be getting. And don't acknowledge what a cruel cut it is - hurting the most the oldest of the old, those disabled at the youngest ages, and the poorest of the poor.

Lesson Number Two: Present yourself as your constituents' champion. Tell your constituents that you stand 100% with them in their opposition to cutting Social Security benefits. Or, if you don't like that approach, borrow a line from our President, say that like him, you are 100% against privatizing or cutting the "basic" Social Security benefit. That gives you a little room, allowing you to say that the COLA cut isn't really a cut in the "basic" benefit.

Lesson Number Three: Obfuscate, Obfuscate, Obfuscate. Tell reporters that you are not at all in favor of cutting benefits, but that there is a tiny, little technical change, the "chained CPI," which will result in a more accurate COLA. Don't go into a lot of detail about how it would shave off of everyone's COLA about 0.3 percentage points a year. Just tell them that it has to do with "substitution effects across categories." If that doesn't put them to sleep, tell them there are a lot of economic advisors who say it is a great idea. Oh yes, do not mention the the 300 economists and other social insurance experts who recently wrote that there simply is not an "empirical basis for reducing the Social Security COLA." Or many others who say, that it is more likely that the current COLA adjustments, just 1.7 percent for 2013, understate the impact of inflation on because the health care expenditures of seniors and people with disabilities have been rising at a substantially greater rate than inflation.

Lesson Number 4: Explain that it could have been worse. Float even worse policy ideas like increasing the nation's health care costs by throwing those aged 65 and 66 off of Medicare. Draw as much attention as you can toward those numbskull ideas, hoping that Americans will be relieved that you didn't do worse.

Lesson Number 5: Avoid Political Accountability. Make sure that the vote occurs as close to Christmas and New Year's as possible, when the American people are most distracted. Make sure that the vote occurs as far away from the next election as possible. Have those who just lost an election get to vote for the cut, so vulnerable members are free to vote against it. Wrap it up in a "Grand Bargain," and then explain that you had no choice or the nation would tumble off a steep cliff. Do anything but take responsibility for cutting the earned benefits of your constituents.

A final, serious word: We know that you are in a bind. We know that you want to hold onto power and continue to get contributions and favorable attention from the elite. We know that you understand what you are doing is harmful policy. Therefore, if you are determined to hurt your constituents, we seriously and respectfully urge you to make the proposal a bit less onerous, knowing, of course, that it is much too little. We urge you to exempt SSI, which provides benefits to the poorest of the poor. We urge you to increase Social Security benefits after 20 years, a proposal known colloquially as a "birthday bump." Use these modifications to sweeten the deal and cover up the bitterness of the policy. But do it with your eyes open. While exempting SSI is the right thing to do, it does not help the millions who are just getting by with the help of Social Security. While an increase in benefits after twenty years is the right thing to do, it does not help those who don't live into their eighties and nineties. Indeed, as the following graph shows, it only softens the blow slightly for those fortunate enough to live to ninety-five or beyond.

In short, the chained CPI is bad policy. If you insist on supporting it though, we urge you to put some lipstick on that pig. Then run away from the policy as fast as you can. 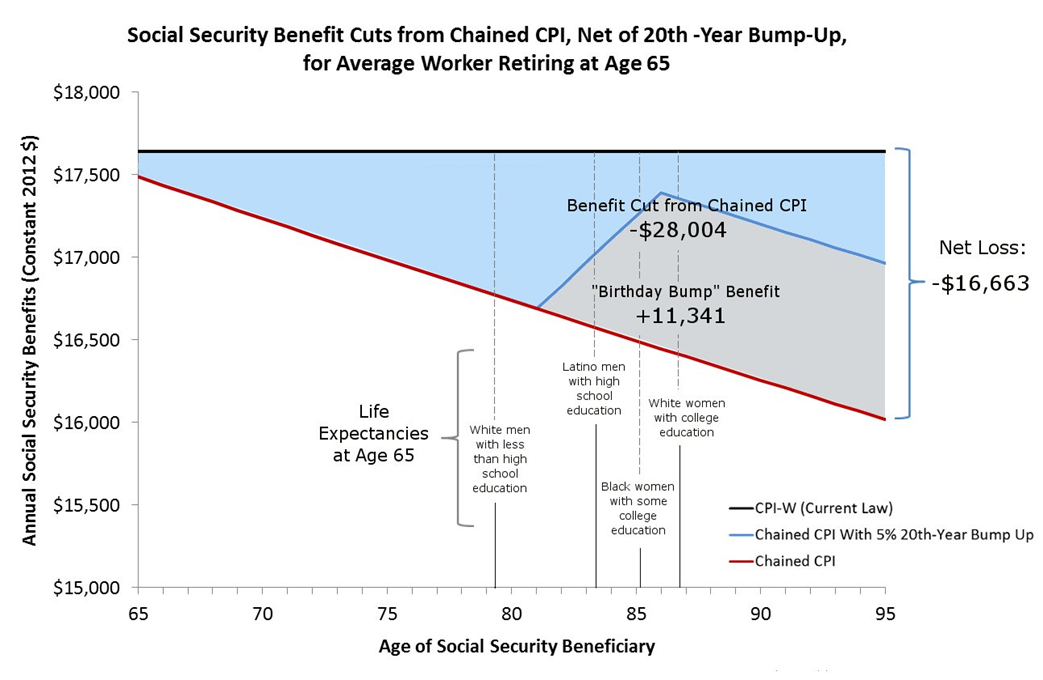 Source: Authors' calculations based on estimates of Social Security Office of the Actuary. Life expectancy data from Olshansky et al., "Differences In Life Expectancy Due to Race and Educational Differences are Widening, and Many May Not Catch Up," Health Affairs 31, no. 8: 1803-1813.
Note: The chained CPI cuts COLAs by 0.3 percentage points each year from the first year of eligibility onward (age 62 for retirees). The 20th-year bump-up would increase benefits by 1% of the benefit of a worker with average lifetime earnings, each year for 5 years, starting after 20 years of eligibility (age 82 for retirees).