From the small parishes with Latino church goers on the East Coast to the Los Angeles cathedral that houses the country’s largest Hispanic congregation, America on Wednesday will pay tribute to Mexico’s patron saint.

The Feast Day of Our Lady of Guadalupe, patroness of the New World, is a day that has been commemorated in Mexico for almost five centuries and by Latinos in the U.S. Southwest for about half as long.

Some of the celebrations are small, with a mass honoring the Virgin of Guadalupe. Other celebrations of the Feast Day of Our Lady of Guadalupe, like the one that breaks the deafening silence in the pre-dawn hours of the morning, when not much seems to stir in Los Angeles except faith, are massive.

Around 5 a.m. Wednesday, the sound of drums will shatter the quiet in the plaza at the Cathedral of Our Lady of the Angels in downtown Los Angeles as Aztec dancers appear out of the darkness, braving the cold in little more than loincloths.

The tradition of Feast day of Our Lady of Guadalupe

It is a theatrical production done annually and to more than 2,000 who fill the cathedral, many of them immigrants praying alongside influential businessmen in suits and women in designer coats.

This feast-day celebration, once obscure outside the Southwest and Central America, has taken on a tenor that in many ways is more mainstream in the Roman Catholic Church in the Americas than the once-obligatory Latin Mass.

In the splendor of the relatively new cathedral, the Feast day of Our Lady of Guadalupe is marked with mariachis, dancing Aztecs and serenades of the Virgin, with the Archbishop José H. Gomez celebrating Mass in Spanish and calling for renewed devotion to Our Lady of Guadalupe.

To Gomez’s right will sit the carefully encased object of the day’s devotion: a 12-foot replica of the centuries-old image of Our Lady of Guadalupe that is enshrined at the Basilica of Tepeyac in Mexico City.

To Latinos, she is the “Virgencita Mexicana," and last year—as she has for years—when a singer serenades the image, elderly women in pews nearby made the sign of the cross. Later, many of them left red roses at the foot of the image, which was blessed by the late John Paul II and toured parishes throughout Los Angeles for three years before it was permanently installed at the cathedral.

Up close, someone who has seen the original in Mexico City will invariably say it could pass for that original they have seen, down to the rips, tears and folds in the cloak.

The original is actually a cloak made of cactus that has survived through the centuries. According to the faithful, it belonged to Aztec peasant Juan Diego to whom the Virgin Mary appeared in 1531 and who became a conduit between Our Lady of Guadalupe and her people of the New World.

Diego asked the local bishop to build a church to honor her. When the bishop requested a sign that Diego’s story was true, the Virgin of Guadalupe directed him to collect roses growing on a desolate hilltop and take them to the bishop wrapped in his cloak.

When Diego delivered the roses, the bishop and other witnesses were astounded to find the image of the Virgin of Guadalupe imprinted on Diego’s cloak.

Mexicans and other Latinos are so wedded to the belief that in 2002, Pope John Paul II honored their long-standing pleas, and Juan Diego was canonized as a saint.

The retired cardinal of the archdiocese, Roger Mahony, has declared the Virgin of Guadalupe more than a symbol of devotion for Mexicans and other Latinos.

“Let us not forget that the Virgin of Guadalupe is the mother of everyone,” he said in his last Feast Day Mass. “She appeared to Juan Diego, but he had to present himself to the bishop.”

“The bishop, not Juan Diego, was in charge of building her church because her church would be for everyone, not just for Mexicans. Mary wishes to be of comfort and help to all mankind.”

This year, Archbishop Gomez has already issued a message.

“Today, Our Lady of Guadalupe calls all of us to follow Juan Diego’s example,” says Gomez. “She calls us to tell our neighbors the good news that they are children of God, sons and daughters of our heavenly Father who loves them. She calls us to love the Church and stay close to her teachings. She calls us to make our neighborhoods and communities strong and to build a Church and a society that reflects the truth that we are one family of God.

“We must open our hearts to conversion, so that like his miraculous tilma, our hearts might be imprinted with the image of the Virgin and her Son.”

Originally published by Voxxi as Our Lady of Guadalupe: A new American feast day 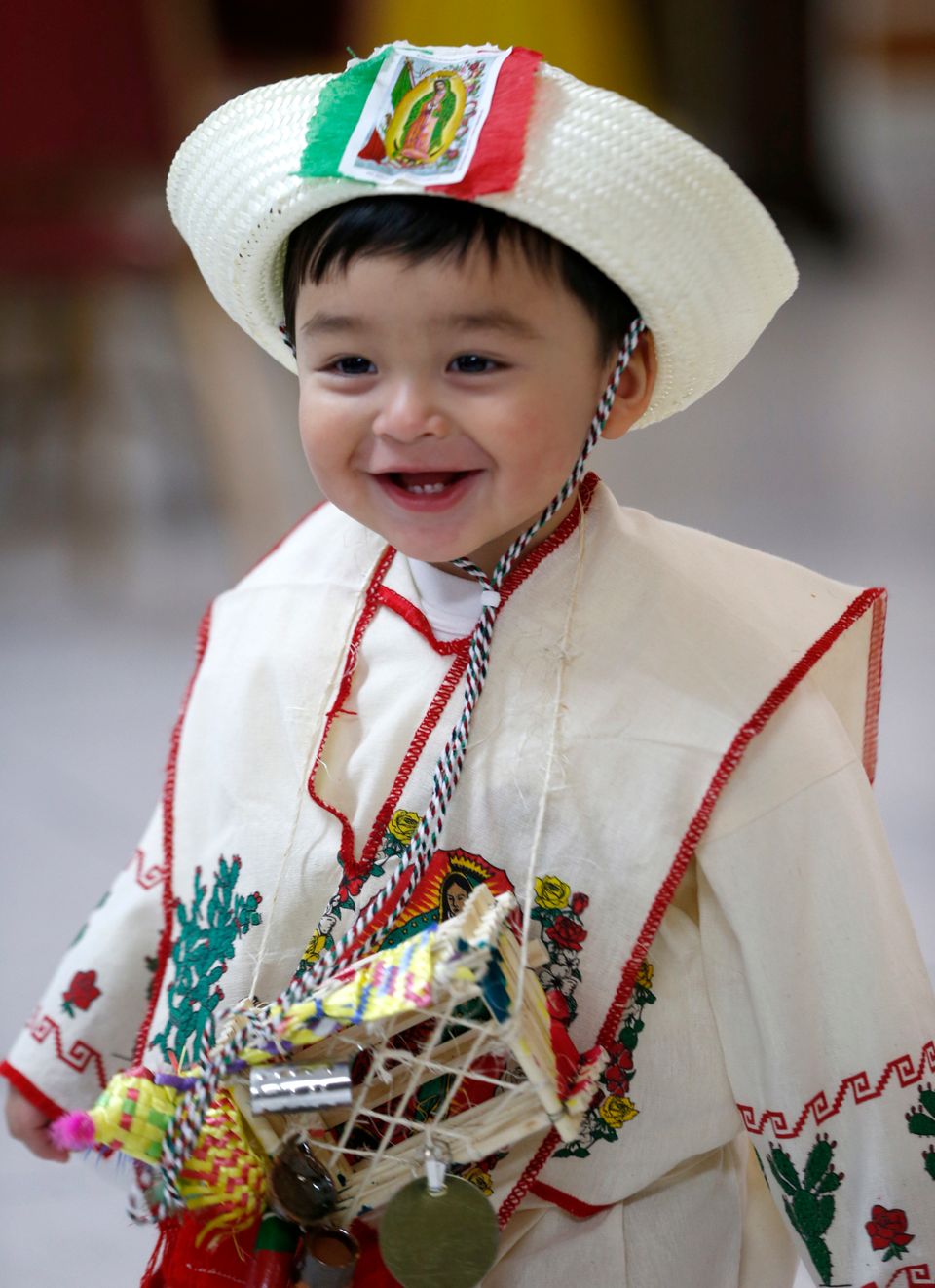 1 / 25
Joseph Villanueva
Joseph Villanueva, 18-months, is dressed in Mexican indigenous clothing during a celebration of Virgin of Guadalupe's feast day at Our Lady of Fatima Church, Wednesday, Dec. 12, 2012, in Passaic, N.J. Catholic Mexicans living in New Jersey pay homage to the Virgin on Dec. 12, to observe what they believe was an apparition of the Virgin seen by Juan Diego, an indigenous man, on the hill of Tepeyac in Mexico City on Dec. 12, 1531. (AP Photo/Julio Cortez)
AP