This is our last full day in Delhi so we tried to visit all the remaining "must sees" that we could.

We took an Uber to Qutub Minar, which is the highest tower in India. It was built in 1193 immediately after the defeat of Delhi's last Hindu kingdom. Some believe it was erected as a tower of victory to signify the beginning of the Muslim rule in India while others say it served as a minaret to the muezzins to call the faithful to prayer. 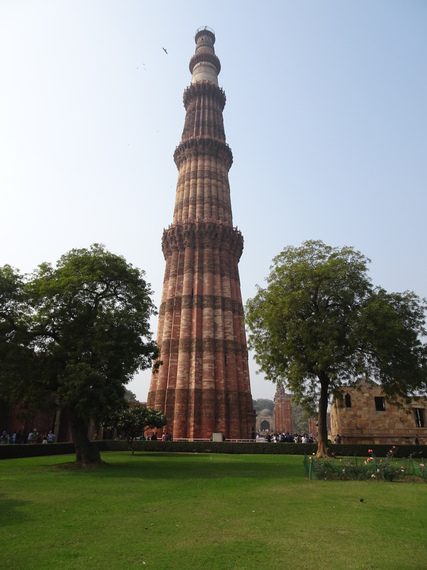 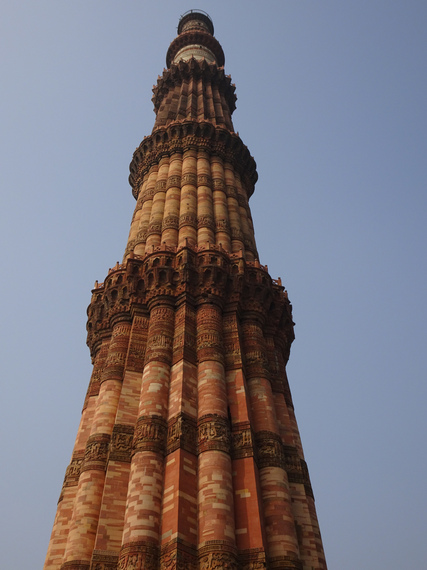 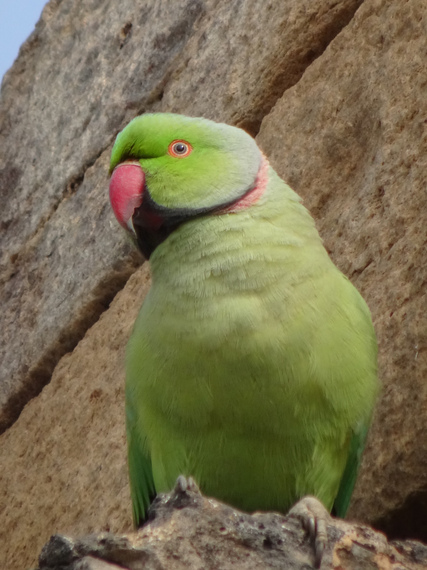 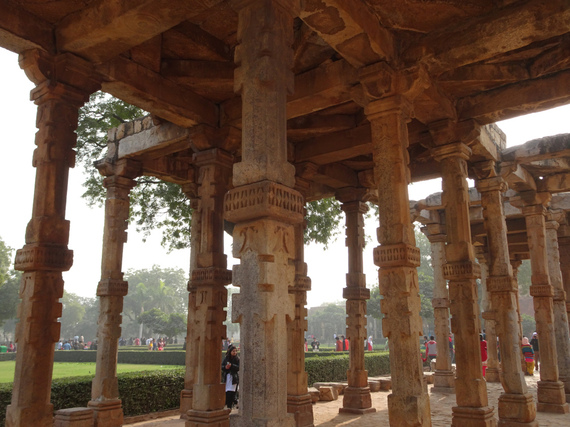 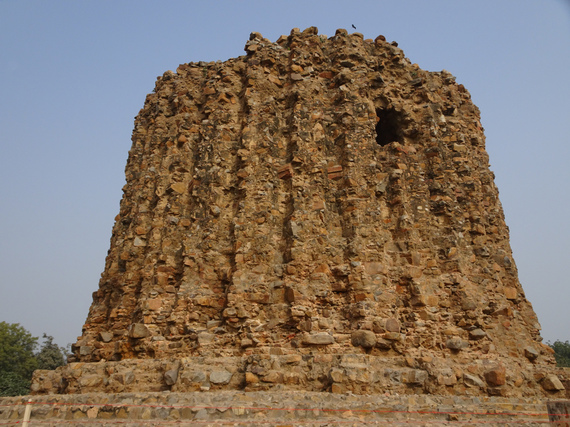 From Qutub Minar, we took a rickshaw to the Garden of Five Senses. On our way, at a stop sign, a woman came out of nowhere and was begging for money. You want to help them but there are just too many... 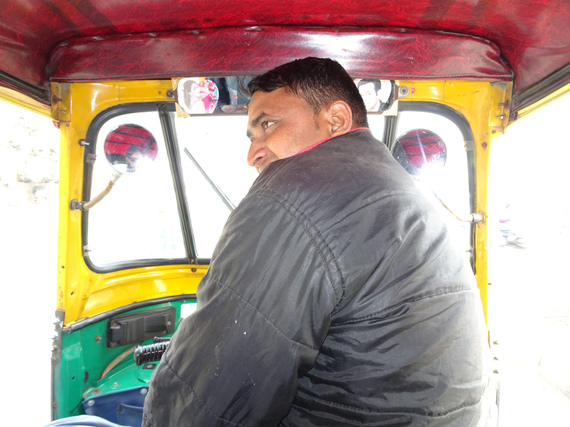 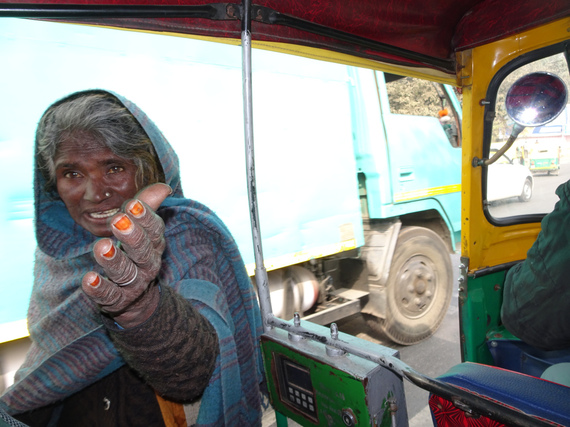 The Garden of Five Senses was a nice break in the chaos. We called this lovers lane because there had to have been well over 20 young couples throughout the garden making out in every corner. It was quite funny. And we also came across an area that was being used to what looked like cooking for a big event or something. Tons of food being prepared right there in the open outdoors. Can't be sanitary but maybe it adds to the flavor. 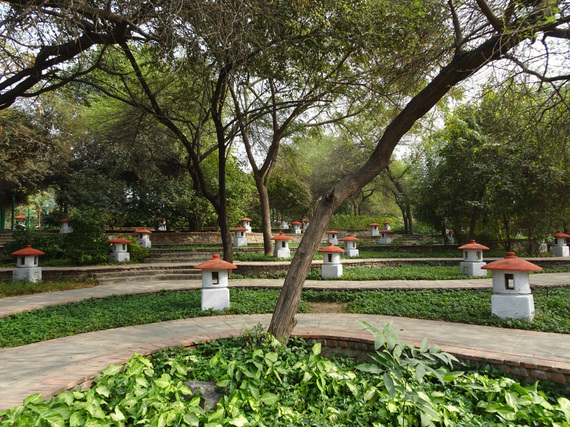 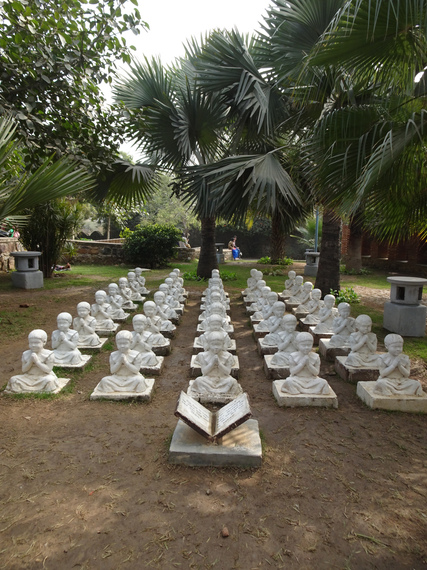 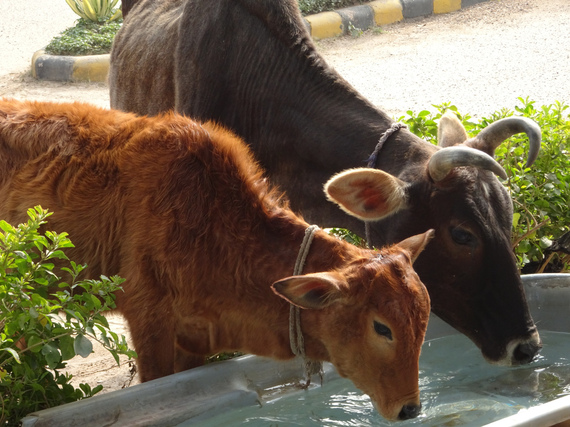 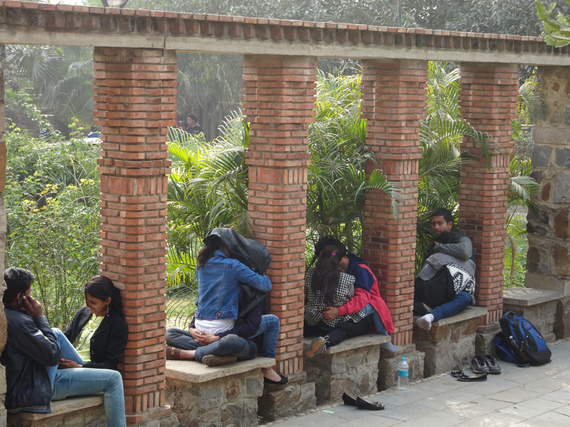 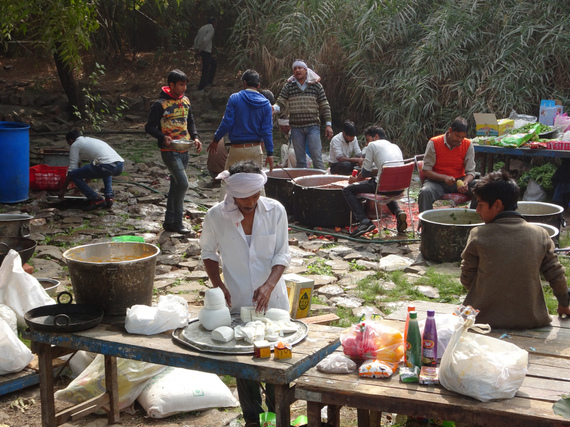 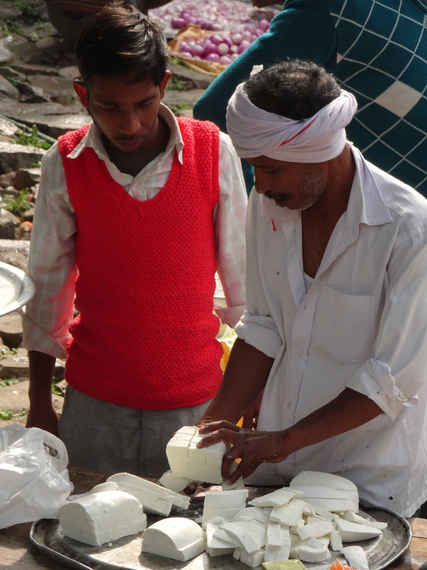 We then took the Metro (go us!) to the Lodi Gardens and had lunch at the Lodi Garden Restaurant which was definitely a tourist location because we saw more white people in one hour than we had in 72 hours previously.

Lastly, we took an Uber to the Lotus Temple which was pretty awesome. It was built in 1986 and is a house of worship for the Baha'i faith. The expressionist architecture was breathtaking. Styled after a lotus flower, with 27 immaculate white-marble petals. Everyone has to take off their shoes off before entering the Temple so you can imagine the array of smells that you can't help but breath in. 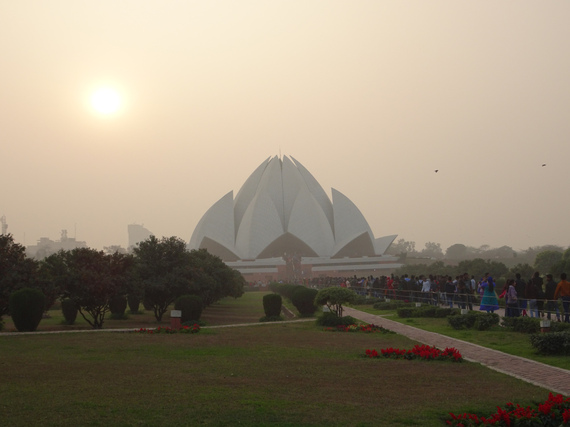 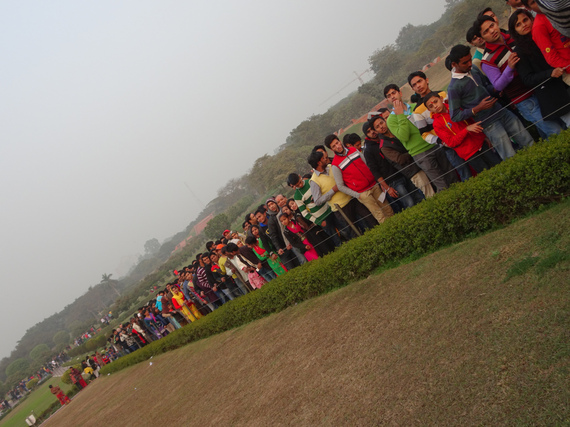 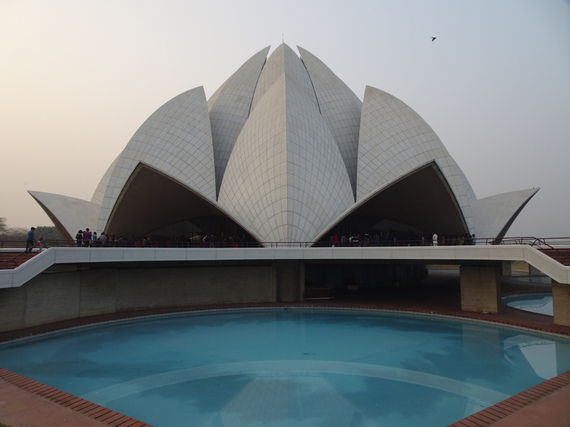 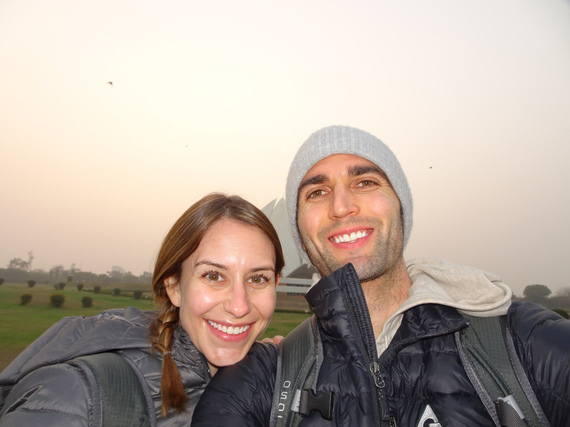 Based on the recommendation of Michele Kajiwara and Stewart Armstrong (thanks again!), we treated ourselves to a very nice dinner at Bukhara. Bukhara has actually been rated a top restaurant in the world, not just in India. On our drive there, one of the observations I noticed was starting about a mile or so out - there was no traffic, there was no trash, there were no homeless; instead, there were paved streets, greenery and quietness. As we arrived in our Uber, the security measures to get in were impressive. It's located inside a hotel and our car had to open all four doors, the hood of the car and the trunk for the guards to search. Plus, we had to put our bags through the x-ray machine. It seems intense at first but definitely makes you feel real safe afterwards. Dinner was delicious. It's quite a unique experience because it's fine dining but you eat with your hands. And the food isn't like sushi where it's meant for that. We ordered a super moist (I know, everyone hates that words) chicken kabob (but not on a stick), a butter naan and an amazing lentil dish that marinates overnight for 10 hours. They give you aprons to put on so you can get as down and dirty as you want. Vinny reminded me of the Nutty Professor at dinner time (Hercules, Hercules). It sure was refreshing to live like the rich and famous for a few hours. 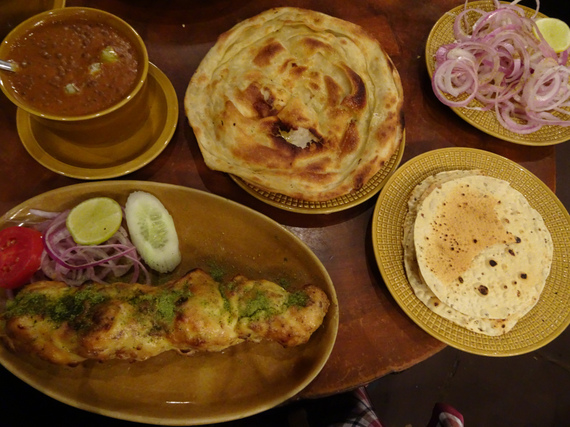 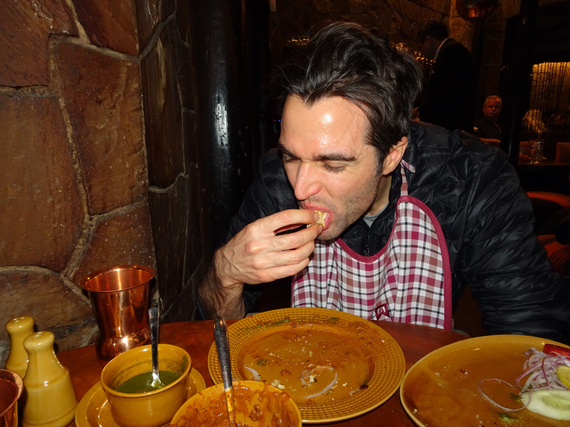 After 3 full days in India now, there have been a couple of challenging adjustments to get used to:

Clean water. It's been advised over and over again not to brush our teeth with the faucet water or drink the tap water so we are constantly buying bottles of water wherever we go. Do you know how hard it is to get all the toothpaste off your toothbrush with just pouring bottle water on it? Try it tonight and let me know how it goes. It's a minor inconvenience but one thats worth it to hopefully save a trip to the hospital.

Hot water. Vinny and I are used to taking long, hot, steamy showers twice a day (no, we are not the reason California is in a drought) and now we can't even get more than 2 minutes of hot water once a day.

It's little things like this that make you truly appreciate where you come from and what you once took for granted now seems like such a luxury.

Lastly, one of the most intriguing things we've noticed is that locals love to take photos with us. Although I have no makeup on, no hair dryer in sight to fluff up my hair or fashionable clothes to feel important (not that I was ever fashionable but better than I am here at least), the locals still make us feel like Brad Pitt and Angelina Jolie (sans an army of kids). 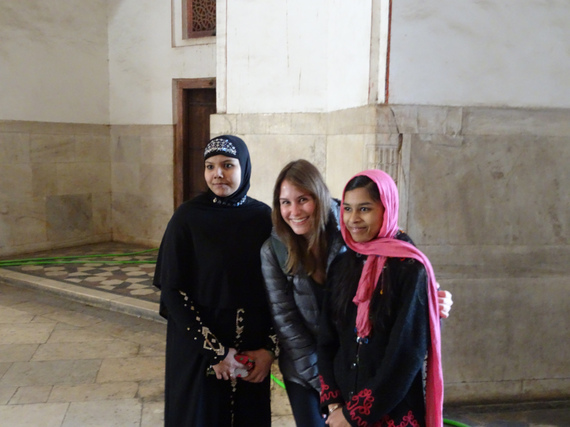 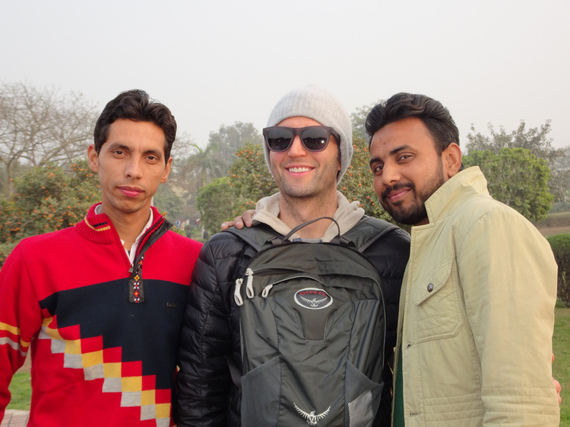 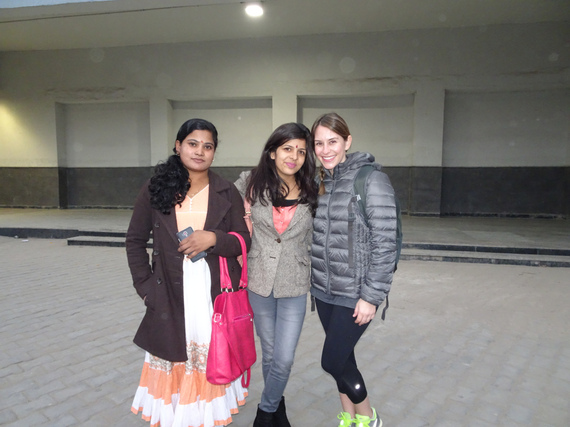 This wraps up our three full days in Delhi. What a ride so far. We are taking a flight tomorrow morning to Varanasi, which is one the oldest and holiest inhabited cities in the world. If Delhi was such a culture shock, I can only imagine what Varanasi will be like.