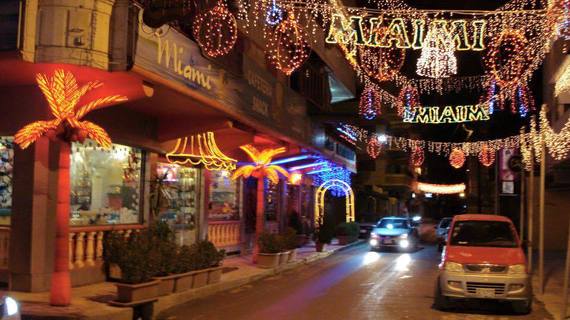 Outside Restaurant Miami in Qamishly in Syria before it was bombed

They carry them on their shoulders - coffin after coffin. The priest calls out their names, proclaims them martyrs. The church is packed. There are tears, there are screams, and there are cheers. Yes, we cheer for our martyrs- those who refused to leave our homeland in order to keep our representation. The video went viral on Facebook very fast. I don't think anyone could hold back tears.

On December 30th, many Assyrians/Syriacs sat in restaurants in Qamishly in northeastern Syria, planning their New Year celebrations. And on that very night, 17 people were blown to pieces, and many others severely injured. Several acquaintances lost their relatives.

"We don't know who carried out the attacks, what we know is that we don't fit in the picture, that they think that Syria should be emptied of Christians," said a friend of mine on the phone just hours after.

He was sitting at one of the restaurants when it was destroyed. When the first message came from ADFA (A Demand For Action) in Qamishly about the bombings, I couldn't think rationally. It took me two hours to get the courage to call my cousins. I wanted so badly for it not to be true. Just three days before, we had posted photos of our teams on location handing out gifts to the refugee children who fled to Qamishly. They were photos full of joy. I wanted to keep that feeling, but I couldn't. Instead, I've been shaking, crying and struggling to get the word out, to make the world aware of the attacks.

The genocide of my people has now reached our last stronghold. There were many memorial services held in Södertälje, south of Sweden's capitol Stockholm, after the attacks. I attended a few of them. On Sunday January 3rd, St. Jacob's Cathedral in the city was full; thousands of people dressed in black had come to honor the victims and show their support for their families who live here. We had, only a few days earlier, felt a certain relief that the terrible year was soon over, and held on to the hope that a better one would supersede it. At the time, we did not yet know what was to come on the penultimate day of the year.

Syriac Orthodox archbishop Mor Julius Ablahad Shabo began his speech by saying: "Many of you were not here, in this church or in Sweden, just a year ago."

After the service, I sat in the adjoining area to participate in the memorial. I sat with my friends and relatives. We noticed that there were several, newly-arrived people who couldn't have been in Sweden for more than a year-people that we did not recognize or people who had fled Syria recently. An old man asked me to hand him the thermos with coffee. He saw me taking notes. "You know that Qamishly was built by the Assyrians/Syriacs after the genocide of our people in 1915. It became a safe zone where we were protected by the French," he said. I told him that a part of my family also fled there and helped build the city with connected villages.

In Qamishly, they grew cotton and many kinds of fruits and grains. I have spent many nights with my cousins on those cotton farms. I've slept in beds outdoors. I have danced, laughed and partied in taverns in the city. I don't know how many times my aunt tried to marry me off. "You're not too bad to look at and you're neither deaf nor blind" was, according to her, attractive to the women of the town. Qamishly was simply charming.

I almost wrote a whole book at Gabriel's, one of the restaurants in the city. When the Assyrians/Syriacs/Chaldeans and Armenians fled in large numbers from Iraq in 2008, I interviewed many of the refugees in that exact restaurant. The day before New Year's Eve 2015, a century after the 1915 genocide, Gabriel's and Miami, another popular restaurant in Qamishly, were demolished.

In recent years, Christians from major Syrian cities like Aleppo and Homs have also fled to Qamishly. Churches, monasteries and organizations have been overcrowded, as well as people fleeing from the terror sect IS or those who have been kidnapped and released after paid ransoms.

In Qamishly, there are YPG, Kurdish security forces, and two Assyrian/Syriac forces - one that cooperates with the Kurdish opposition, and one with Bashar al-Assad's government. Speculation about who may have carried out the attacks is intense. Could it be the opposition, Kurds or Arabs who want to eliminate government supporters? Is it IS - the terror sect who claimed responsibility?

The actual terrorist attack took place in the area of the city where the majority of the population is Christian and is controlled by supporters of the Syrian government. Here, we thought, we would at least be a little safer. But now the terror has even reached this amazing city-a city that is full of theaters, concert halls and other cultural institutions.

100 years after the genocide that nearly eradicated the Armenians, Greeks and my people, I went to the White House to, among other things, persuade President Obama's staff to recognize the current cleansing of Assyrians/Syriacs/Chaldeans and other minorities as genocide. That was a month ago, on December 8th. We had with us statements from 51 experts from the Convention on Genocide, adopted by the UN General Assembly on December 9, 1948. The experts wrote that the criteria for genocide are not only met, but that it is worse than that. Hillary Clinton said that it is genocide. Obama should, if he is to retain any credibility, also recognize it. European parliamentarian from Sweden, Lars Adaktusson is desperately fighting to get it recognized in the European Parliament. Margot Wallström, Swedish minister for Foreign Affairs, you declared in February that what is happening is genocide. What more are you prepared to do?