It's a beauty salon in the South. I'm waiting while my fiancée gets her makeup done about 10 feet away. An older woman who was eavesdropping turns to me and asks, "Is she getting married today?"

I say yes. Then she asks what every Southerner asks: "What church?"

I take a deep breath and exhale, relieved I can answer this question. "The Unitarian on Heyward."

"I know that one," she says, and then goes on to tell me that she lives in a neighborhood nearby.

A younger woman returns from getting her hair washed and overhears bits of our conversation.

"Are you getting married today?" she asks.

I take another deep breath, feel my heart skip a beat, and say yes.

"We are both getting married today," I say. "To each other."

The older woman's eyes widen and she goes as gray as her freshly-coiffed tresses.

I turn to the younger woman as she says, "Some people will judge. I don't judge. Congratulations."

"Thank you," I say, and look at my phone to give us all a break.

That's when it occurred to me that my lesbian wedding was turning out to be much more traditional than my first one -- to a man.

Back then, we were not married in a church. He was an agnostic. ("I'm not an atheist because that would mean I know there's not a God. I don't know.") So we got a judge to officiate.

My wife and I share a deep faith. It was one of the reasons we fell in love. She studied theology in Germany, and as a writer, I love talking to her about the languages of ancient faiths that she knows -- Hebrew and Latin and Greek and German and English.

When we decided to get married, we knew we wanted it to be an inclusive Christian ceremony. With a pastor who understood that this was a sacred covenant that we were making. In a church.

So, our ceremony was more traditional in these ways -- the Christianity, the pastor, the church -- and here we were, getting our hair and makeup done in a salon -- something we also hadn't done for our first weddings to men.

These weren't just individual choices we were making. We know, as women in our 40s, that so much of life's choices are created by circumstance. We are who we are, in large part, as a result of the social communities we inhabit and the contexts they provide.

So we also wanted to be married locally; our first weddings were held on islands, quite literally -- in Puerto Rico and Georgia. We were young. It was romantic. We thought the couple-ness was the most important part.

We know better now. We know that being married surrounded by friends and family in your community, by people you'll run into in the grocery store, by people who will take care of your pets when you go on trips -- this is as important as the couple part.

We also know that when we walked down the aisle, we were walking on a path that had been paved by dreamers and activists and lawyers and lawmakers and Americans who prayed for justice and equality and peace.

The people who paved this path made the faith and legality and community acceptance of our wedding possible.

And when the congregation filled with people of all faiths turned and saw our hair and makeup (she, who had never had a blow-out, and I, who had never worn false eyelashes), we saw their dropped jaws and smiling grins and gasps.

Yes, we were beautiful Southern brides getting married. To each other. In a church. Surrounded by friends and family. And perfectly legally.

Even as the Supreme Court decision about same-sex marriage looms later this month, our wedding was not a political spectacle, nor a radical overthrow of traditional values, but rather an embrace of them.

It was the legality of it that made it possible for our lesbian wedding to be traditional. A celebration of faith and love and marriage. An upholding of social bonds that strengthens who we are as individuals and as a nation.

And on that day, we loved each other and the United States more than we ever thought possible. 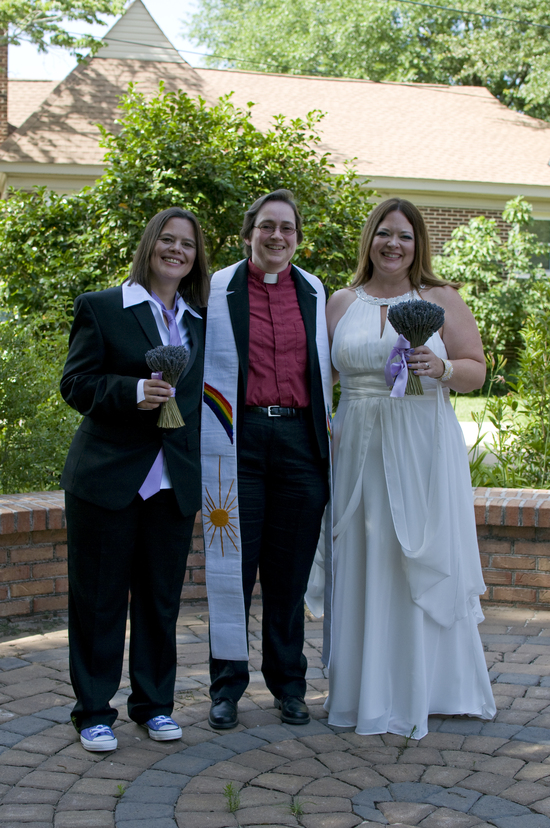 Author of 14 books including Earth Joy Writing and Beautiful Waters