The Longevity Revolution is Here; designed by Bernard Starr

Some years ago, a retail homegoods company created the catchy slogan "It ain't just paint" to tell the public that their stores sold much more than paint. The ad campaign apparently failed since the company went bankrupt.

The longevity revolution, marked by unprecedented gains in life expectancy with the prospect of continued increases, faces a similar dilemma: "It ain't just Social Security and Medicare." But unlike the management of the paint and housewares stores, politicians and advocates for the elderly pretend that the longevity revolution is almost entirely about Social Security and Medicare. Thus, they offer facile "just" solutions: "Just do this" or "just do that" and the challenges of the explosive aging of society are solved.

But the deal is far from done. More radical thinking and revamping will be necessary to create a viable society for all ages.

The immediate task is to recognize that life extension around the globe brings us into uncharted territory. And we don't know the consequences of this monumental societal shift. We are entering a vast sociological no-man's land.

A single statistic cited decades ago by Dr. Ken Dychtwald, founder of Age Wave, should have awakened us to the cataclysmic implications of the demographic shift we are facing: "For 99 percent of the time humans have inhabited this planet, life expectancy at birth was less than 18 years of age." In Classical Greek and Roman times life expectancy was less than age 40, which remained the same through the Middle Ages in Europe. What is celebrated as the explosive life extension of the longevity revolution is a very recent phenomenon.

Societies have always been dominated by the young. Now, for this first time in human history, we are witnessing older adults age 60 plus comprising the largest segment of society when you break down age groups in the U.S. into infants, young children, adolescents, young adults, and middle and late middle-aged adults. And that trend will only continue, as life expectancy increases to who-knows-what levels.

Keep in mind that all of the advances in longevity since 1900, from an average of age 49 to today's average of 78.8 (81.2 for women and 76.4 for men and several years higher in many other countries), can be traced to public health measures (clean water, advances in sewage and waste disposal, etc.), the introduction of vaccines, and the advent of antibiotics. None of the increases are based on breakthroughs in cellular biology or penetration of the genetic aging code.

But now laboratories around the globe are working on unlocking the mysteries of the biology of aging with some encouraging results and the prospect looms of significant advances that could catapult life expectancy to science fiction levels. What then? More "justs"?

In the graphic illustrations below, provided by the United Nations, we can see the dramatic shift in demographics from 1950 to the projection for 2100.They tell a compelling story that should wake us up and shake us up. But that has not yet happened.

Confirming that we are still asleep--or in denial--about the vast implications of the longevity revolution, the presidential debates and campaign speeches on the left and right have been mired in the narrow vision of "just this and just that" for Social Security and Medicare. Nowhere do we see a grasp of the bigger picture, as in the diagrams below. Are politicians being honest or are they dodging political bullets or a "third rail" ("Touch it and you die") issue that might affect re-election? 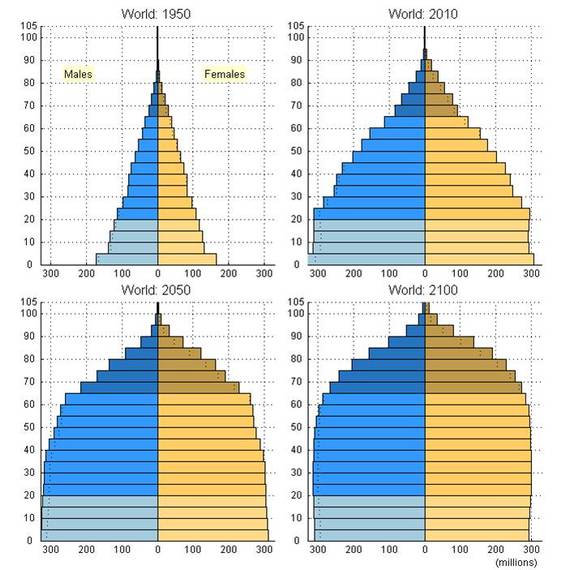 The 1950 pyramid shows most of the population at the bottom--the younger ages. In the 2010 pyramid the upper ages expand. The 2050 projection shows the upper ages increasing explosively--and that expands further in the projection for 2100. Most notably, in 2100 a dramatic shift occurs in which the representation is no longer a pyramid. And the 2100 demographics widen what once was the peak of the pyramid. The shift is even more dramatic for developed nations.

If we continue the trajectory into the future, at some point the demographics will be represented by a reverse pyramid: even fewer at the younger ages and most of the population in the later years. The younger population will be further diminished when we add to the picture the alarming drop in birth rates below replacement levels in most of the industrialized world . 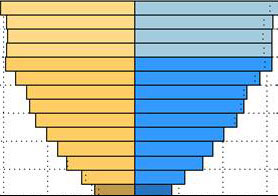 How will a vastly reduced young population support the massive expansion of the elderly population? This is a critical question for the longevity revolution. In more formal economic terms: Can an economy thrive or survive if the largest segment of the population, which far outnumbers the young and working populations, does not contribute to GDP (gross domestic product)?

That's a question no one wants hear, let alone address. But denial will not make it go away---nor will the unfolding reality, as aptly captured in a line from a Graucho Marx film: "Who are you gonna believe, me (in this case, politicians, experts, and advocates) or your own eyes?" And there's no mistaking the direction of demographics if we open our eyes, look carefully at the facts, and conjure up honesty.

When we do grasp the challenge and start thinking productively there may be successful strategies---and not the proposal of "work till you drop."

We pay lip service to the "wisdom of age," but do little to harness the knowledge, abilities, and skills, of all of our senior citizens. They are ready and eager for inclusion in the mainstream of life--for the benefit of everyone--but we have not established an easy path or structure to accomplish that.

I've suggested some possibilities in the video interview below by Emmy Award winner and former NBC News producer and writer Rita Satz. These just scratch the surface of possibilities.

We will need much more out-of-the-box thinking to meet the unique challenges of the longevity revolution.

One critical difference though. The Renaissance and Industrial Revolutions generated better lives by creating new jobs, new opportunities, and wealth---they expanded GDP. Thus far we have not figured out how to accomplish that with vastly expanded life spans. Can the longevity revolution succeed if we don't? If not, it's the most critical issue we must address. And this is not a "we" versus "them" issue. Everyone will age. You will be "them."

Life extension offers the magical opportunity of bonus years to relish the joys of living and loving with family and friends, time to make up for regrets and lost opportunities, and time to pursue and fulfill dreams. But without a firm foundation dreams can turn into nightmares. We must not allow that to happen.

To insure a sustainable infrastructure of support for the longevity revolution let's remember that "It ain't just paint."

Bernard Starr, PhD, is professor emeritus at the City University of New York (Brooklyn College) where he directed a graduate program in gerontology that spanned seven graduate departments. He is also the founder, and for 25 years, the managing editor of the cutting edge Annual Review of Gerontology and Geriatrics. He was also the editor of the Springer Publishing Company series Adulthood and Aging and another series Lifestyles and Issues in Aging. For three years he wrote commentary and op-ed articles on healthcare, the boomers, and issues of an aging society for the Scripps Howard News Service. And for seven years he was writer, producer, and host of the award winning radio feature The Longevity Report on WEVD-AM radio in New York City.