Most mothers can't help but work hard -- it comes with the child-rearing territory. Yet many great mothers play hard too. To help your daughter be her best, show her what it means to get into the game.

From grandmother to mother to daughter, the women in our family experienced firsthand the many gifts of sports like fitness, discipline, and teamwork, but also academic and professional advantages. Sports gave us a sense of ourselves, our power, and the willingness to dig deep to turn challenging situations around.

From a One-Room School House to International Influence - Colleen Turner

My mother's one-room schoolhouse in her Kentucky coal-mining town had no sports teams for girls. Still, she shot hoops at every chance, and after graduation, a radio tube manufacturer recruited her to work for them and play for the company basketball team (photo - Clarabel Gish, top left, jersey 6K7, circa 1939). Her positive sports experiences made her a stronger woman and a keen advocate for my own athletic and professional pursuits. 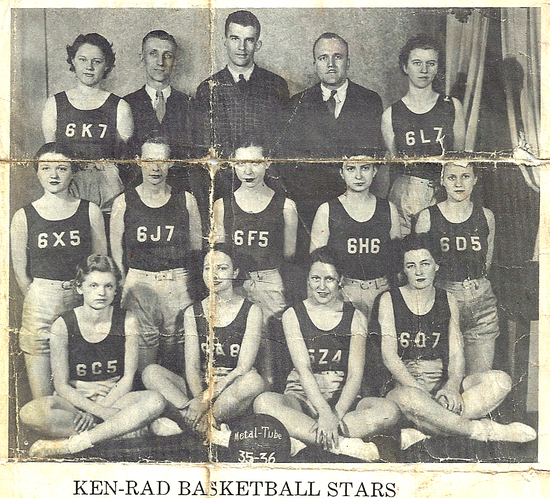 I became a champion skateboarder, surfed, and played volleyball for UCLA and the women's national team. It wasn't the trophies that made the difference, however; it was the leg up in life that the "games" provided. The lessons I learned from sports helped me to succeed as a military officer, a Ph.D., and a mother.

As a "sweet sixteen," I learned how unfair life could be when I applied for a summer job at an ice cream parlor. The manager told me I couldn't work there because I wasn't strong enough to lift the ice cream cartons in and out of the freezer. In training for the Olympics at the time, I was strong enough to lift the manager in and out of the freezer. I resisted the urge to give him a demonstration.

In those days, little recourse existed for challenging business hiring practices, and sports scholarships didn't exist for women. No matter what I accomplished in sports as a female, the boys and men got most of the attention and rewards, making it harder to view my achievements as important when society didn't.

When Bill Walton and I were selected as UCLA's 1973 outstanding college athletes, Bill went to Portland to play NBA basketball for $2.5 million while I felt fortunate to get equal pay for equal work in the U.S. Air Force. There I gained valuable skills, merit-based respect, and ultimately contributed to the Pentagon and State Department's strategic communications efforts.

Because my mother supported my sports interests, and I gave my daughter similar encouragement and opportunities, we've reaped expected and unexpected benefits. Now my daughter is not only opening the doors of athletics to disadvantaged young women and girls, her work is giving me a better understanding and appreciation of what it means to keep playing hard in my "sweet sixties."

Passing the Torch and the Ball - Kim Turner

My grandmother encouraged my mom to skateboard, surf, and study at a time when beehive hairstyles and boyfriends were higher priorities for most girls on the block. When I was growing up, not much had changed as most mothers passed out orange slices at our soccer games and helped pick clothing styles for school. My mom passed volleyballs at team practices and helped me pick resume styles for positions I secured at the White House and Senate.

In the 1990s, I played for Brown University's volleyball team, just two years after the team staved off the program's demise thanks to a major Title IX case brought by female athletes. Over twenty-five years after my mom won her league championship, I did the same, but women at Brown and across the country were still fighting for the chance to play, decades beyond Title IX's passage.

Upon graduating from law school, I was hired by a top New York firm, continued playing sports, and later found my passion in nonprofit law helping girls gain equal athletic opportunities, a key avenue towards academic and employment success. As an attorney, I ensure that female students, especially those in low-income areas, stand on an equal playing field in grades K-12 when girls first get the chance to play, or at least they should.

Each week, I also fight for the girls on the soccer team I coach in a diverse, low-income part of the Bay Area where equal sports opportunities are still not the norm. The girls face second-tier facilities and sub-par support as they progress through school. The glittering gold won by the U.S. gymnasts, volleyballers, and track stars of last year's "female-dominated" Olympics lead us to believe fair play prevails today. Though for my girls, who can't play expensive club sports, who don't attend high-resourced schools, and whose parents need them at home, the obstacles are substantial.

As my waist-high players scramble across a hot, grassless blacktop with a couple of donated soccer balls, I work hard so they can play, and in turn, succeed in the classroom and the workplace. With the cheers of my grandmother and mother echoing in my ears, I encourage them to run faster than they knew they could, shake off a tumble during a scrimmage, and learn how to cheer each other on. My mother and her mother were women too busy breaking down barriers to notice them--the attitude and gift I now pass on to my girls.