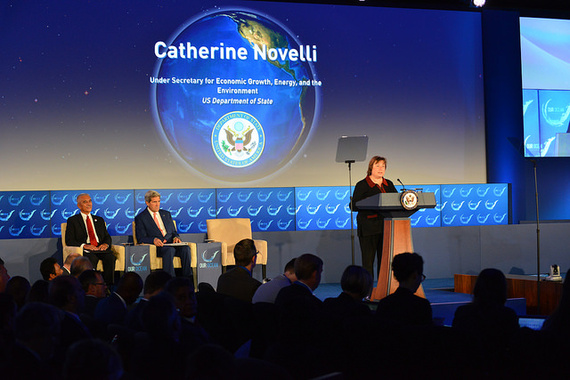 Every elementary school student is taught that our world has five oceans. When Secretary of State John Kerry first arrived at the State Department he challenged what we all knew. He asked us to look past the cartographer's lines to see a singular ocean, covering three quarters of our planet, essential to life, but under threat from human activity as never before. He launched a conference in 2014 to bring together a community of advocates from all over the globe to commit to taking action on the threats to the one ocean, "Our Ocean."

I have traveled around the world speaking to those who have become part of the "Our Ocean" movement. A more diverse group you cannot imagine: religious leaders and environmental organizations, celebrities and scientists, young people and those old enough to remember a time when the ocean was not as it is today. As we prepare to host the third iteration of the Our Ocean gathering this September in Washington, D.C., I am inspired and energized knowing that this international movement has generated commitments to protect nearly six million square kilometers of ocean and pledges of over $4 billion for ocean initiatives and partnerships. This year's conference will inspire even bigger and better commitments.

One place we are making real progress is in coming up with solutions to ensure the sustainability of the world's fish stocks. Half the world relies on the ocean for a significant source of their daily protein. Wise management of our "blue economy" is essential for international food security. Yet illegal, unreported, and unregulated, or IUU, fishing is undermining conservation and management measures. What can we do to combat this multi-billion dollar activity that is robbing honest fisheries and destroying ecosystems?

One exciting answer is the recent entry into force of the Port State Measures Agreement (PSMA). This agreement will put safeguards into place to prevent vessels that have been illegally fishing from unloading their products in ports of countries that are party to it, removing the incentive to fish illegally. On June 5, 2016 the PSMA comes into force with 30 parties including the United States signed on. At the first Our Ocean Conference in 2014 when we advocated for this agreement as a solution, only ten parties had joined. Yes, we need more countries to become part of the network, but the entry into force of the PSMA is a milestone that shows the international community is willing to act.

We also see momentum in better international efforts to detect and stop those who are engaged in IUU fishing. At the 2015 Our Ocean Conference hosted by Chile in Valparaiso, Secretary Kerry announced "Sea Scout" and called on others to join. Sea Scout is a global initiative that brings together governments, intergovernmental organizations, and the private sector in a unified effort to detect and increase enforcement against those engaged in illegal fishing and associated organized criminal networks. Pilot projects will concentrate on "hot spots" where the threat of IUU fishing is known to be most prevalent. IUU fishing is often associated with other transnational criminal activities like forced human labor and trafficking in arms, drugs and other black market goods.

Another strategy that is showing progress is pushing for the creation and better management of Marine Protected Areas (MPAs). MPAs are essential to a vibrant blue economy, allowing fish stocks to grow and recover, protecting biodiversity, and bolstering tourism. At the Our Ocean conferences, participants from Panama to Gabon to Palau and many places in between announced new protected spaces. The world's goal is to protect ten percent of coastal and marine areas by 2020. In the United States over 30 percent of our waters are in MPAs, but globally only a little more than three percent of waters are protected. We are looking for more commitments to protect marine areas at this year's Our Ocean Conference.

In addition to IUU fishing and MPAs, we are looking for solutions on marine pollution and on the impact of climate change on the ocean.

Every single person can do something: organize a beach cleanup, give up single-use plastic like water bottles and grocery bags, or raise awareness through social media using hashtag #OurOcean. The Our Ocean movement is a call to action. Tell us about your commitment! We need new voices to act and to inspire others to protect our ocean. We have one ocean, one future.

U.S. Under Secretary of State for Economic Growth, Energy and the Environment