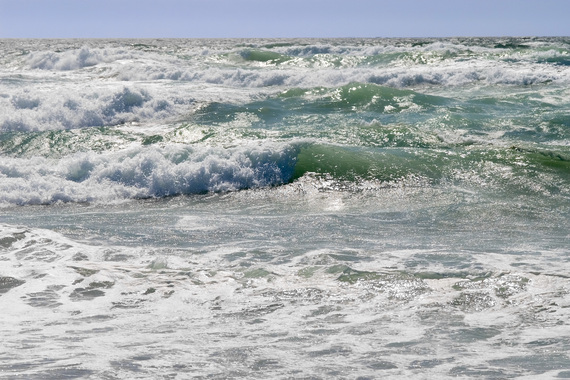 I did not expect good news when I attended the reception at the Museum of Natural History on June 25th to learn about the results of the Global Ocean Commission report on the state of the world's oceans. These days, reports from environmental groups are never something to cheer about. In this case the news was even more disturbing than I expected.

After an eighteen-month investigation, the Commission, made up of former heads of state, government officials, and prominent business leaders concluded that our oceans are dying from climate change, pollution, and over-fishing. The Commission proposes an eight point program to rescue the oceans over the next five years.

Why should we be concerned? José María Figueres, Co-chair of the Commission and former president of Costa Rica, has summed up the dire situation with these words: "The ocean provides 50 percent of our oxygen and fixes 25 percent of global carbon emissions. Our food chain begins in that 70 percent of the planet." He added that "a healthy ocean is key to our well-being, and we need to reverse its degradation." He warned: "Unless we turn the tide on ocean decline within five years, the international community should consider turning the high seas into an off-limits regeneration zone until its condition is restored." A Commission video states the crisis even more starkly: "No ocean, no us!"

In his brief talk at the reception, David Miliband, also co-chair of the Ocean Commission and former UK Foreign Secretary, urged politicians, scientists, journalists, and ordinary citizens to rally behind the salvation of our oceans and the planet -- and to get the message out to others.

Will getting the message out turn the tide in the battle to save the planet? I doubt it. We are swimming in information and messages. Earlier the this year leading scientists declared that we are fast approaching the critical point of no return for climate change -- a point with predictable devastating consequences. But who is listening? The public continues to be frighteningly indifferent. Who among the public is willing to place the salvation of the planet over immediate personal concerns? That question was dramatically called to my attention recently when I presented a list of critical issues to a group of seniors enrolled in a life-long learning program and asked them which one they would place first. The list included: terrorism and national defense, global warming, jobs, vanishing icebergs, protecting Social Security, income inequality, ocean pollution, sustaining Medicare, protecting the Amazon rain forests, reducing fossil fuel emissions, regulating Wall Street and the banks, stopping fracking (shale gas drilling), protecting wildlife (elephants, lions, whales, etc.), eliminating genetically modified foods (GMOs), campaign finance reform, free college education for all, national healthcare (Medicare for all).

I was particularly interested in the seniors' answers since popular wisdom says that seniors are more concerned than other age groups with the welfare of children, grandchildren, and future generations. And no issue is more vital for the well-being of future generations than the viability of life on the planet. Psychologist Erik Erikson called this concern of older adults "generativity."

But the seniors defied conventional wisdom. Jobs, Social Security, and income inequality topped their listings. Only one person, toward the end of the discussion, cited climate change -- and his response seemed almost gratuitous in recognition that we were about to screen a documentary on the melting of icebergs.

Perhaps I should not have been surprised.

Politicians avoid talking about environmental issues for fear of losing favor with their constituents, who are clamoring for jobs, mortgage relief, and financial security. During the 2012 presidential debates between Barack Obama and Mitt Romney environmental issues took a far back seat; in fact, they were barely mentioned. Both candidates knew instinctively that in the throes of an economic crisis placing the salvation of the planet high on the national agenda would not generate votes. It might even take away votes from people who feared the candidate would be indifferent to their personal struggles.

So where does this leave us? If more environmental studies and more alarming news will not mobilize leaders and the public for an all-out commitment to the preservation of our small vulnerable corner of the universe, what will? Perhaps we need to shift our focus from information to changing human behavior. Let's enlist leading behavioral scientists and psychological associations to address how to awaken the public to the urgency of protecting the planet. Let's launch a campaign to make this the number-one priority. And let's adopt these mantras: No planet, no jobs; no planet, no Social Security; no planet, no mortgages; no planet, no corporate bonus packages. No planet, no us.

Bernard Starr is a psychologist, journalist, and professor emeritus at the City University of New York, Brooklyn College.