Earlier this year I had the unfortunate luck of breaking the 5th metatarsal on my right foot while out running one evening. The metatarsals are the long bones that connect your toes to your ankle, or something like that.

I had surgery to fix the break and was subsequently in non-weight bearing mode for just over eight weeks. Typically this would involve the use of crutches, but my physician told me about a device called the iWalk2.0, a crutch alternative. The iWalk2.0 is basically a peg leg with an attached support platform that holds your leg back. The entire device straps to your thigh and allows you to walk while keeping your hands free. From the front it looks like you have a prosthetic leg (see the picture below), and this is where my story begins.

As the first couple of weeks using the device progressed I began to notice something odd. Whenever I was walking down the street people walking towards me would inevitable look down at the peg leg and then as we were nearing each other would look up and away as they passed by. Huh?

Then it dawned on me. They were doing what they were told to do, most likely by their parents: Don't stare. It's rude. Yet in their attempt to not be rude they were doing just that. So, the next time you are walking down the street and you see someone with a disability -- look them in the eye and say hi. That's it. The end. And don't look away -- it's just rude.

For more tips on interacting with people with disabilities check out this helpful page from the Illinois Department of Human Services. 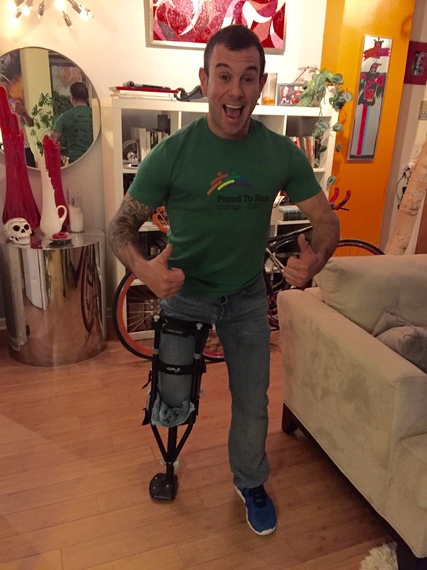