You have a 1 in 2 chance of getting cancer in your lifetime, and a 1 in 4 of dying from it. With those odds in Las Vegas, you would be a winner all the time. So why do you NOT fervently support cancer research to literally save your life?

In today's political arena, increased funding for government programs is unpopular. For citizens who will not vote to increase taxes to fill potholes and save themselves $1000 in repairing their damaged cars, you will also not find many who would dramatically increase the U.S. research budget even if the investment might provide cures for their inevitable cancers.

In a devoutly religious, conservative country like the United States, there is hardly a single person who will not pray to God for a miracle while a loved-one dies from cancer, but would dismiss the idea of dramatically raising taxes to properly execute a War on Cancer.

At the voting booth, you will vote for a politician without any consideration of their stand on funding cancer research. The news media NEVER asks candidates how they stand on this issue, while citizens face a 1 in 4 lifetime chance of dying from cancer according to the U.S. National Cancer Institute's Surveillance Epidemiology and End Results Database . You have a 1 in 20 million chance of dying in a terrorist action and billions of dollars can be found literally overnight to save yourself from that rare but horrible fate. But for your nearly inevitable death from cancer, well, there are just so many other pressing needs in our Society, and we don't want to be a tax-and-spend country anyway. Nevertheless, one in four of the current members of Congress will die from cancer. You would think that at least THEY would try to do more to avoid that fate.

It is really quite pathetic that the average American is so anxious about having cancer, but so willingly chooses to march directly into the arms of this fate without at least trying to struggle against it. Collectively, if you smoke you will not repudiate smoking as a habit. In a food-obsessed country, you will not meaningfully repudiate obesity as one major cause of your fate, and then do something about it. And for the 50 percent of us whose cancers are not caused by any known lifestyle choice, we will walk into the voting booth and select a candidate whose stand on abortion we like, but not one whose stand on cancer research we even know about. 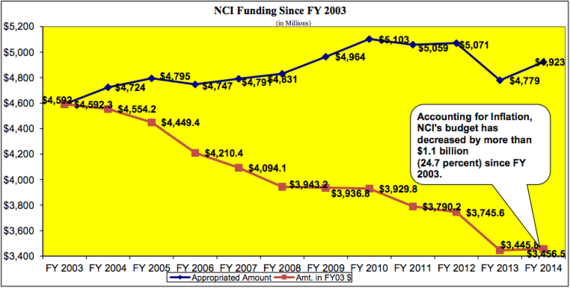 The decline in NCI funding for research. (Credit: ASCO Connection.com)

This graph says it all. In 2003, Congress gave the National Cancer Institute about $4.6 billion to wage a research war on cancer, but every year since then it has refused to increase this budget to keep ahead of inflation. The result is that in terms of today's purchasing power for resources and providing grants to researchers, we are now over $1.5 billion behind. Effectively we have cut the research budget by nearly 30 percent.

At this point, you will stop reading because now you think I am just another shrill for a special interest group on the dole for federal funding and your precious taxes. Thanks for reading this far! And good luck with your cancer diagnosis.

Now for the rest of you!

Cancer funding, when it is awarded, is done so on the basis of popularity. The cancer that can get Madison Avenue marketers behind it is the one that gets the most funding. Here are the stats.

Deaths by cancer versus funding.

Lung cancer kicks our butts in terms of cases, but gets substantially less per-patient research funding than the cancers you always seem to hear about in the news. Bladder cancer is the fifth most frequent cancer but ranks 19th in funding. Maddison Avenue has not found a tactful way to talk about the organ that stores your urine. Other examples like this abound. And then there is the actual level of funding for specific cancers. Take for example prostate cancer. Two million men have been diagnosed with it by 2012, and another 250,000 are diagnosed annually, but the federal budget allocation through the National Cancer Institute was about $80 million toward prostate cancer research in 2012.

We will spend $16 billion on Easter this year, yet people rarely die from eating Easter Eggs and candy.

We spend $58 billion each year on the family pet and nearly $15 billion of this on veterinary care alone, but the odds are very good that your pet may outlive you if you have cancer.

Each year, people under age 25 spend $16 billion for new cell phones, but would they consider increasing their collective taxes by the same amount to support cancer research? We could fork over $20 billion on Apple's new Watch in 2015 alone!

There is something very disturbing about a country that consciously choses to not support efforts to save their own lives, in favor of the political topic du jour trumpeted by politicians and covered by the news media. We enter the voting booths with only one mission: To stick it to the Other Party, or to vote on some religious principle, or to send a message about taxation and the size of government. But the thing that will most likely actually kill YOU in the end is nowhere in the decision. You do not even know how your favorite politician voted on cancer research funding.

What you can do.

First, the odds say you should expect to contract cancer in your lifetime. The odds also say that you will probably not have a good long-term outcome. You need to accept this and do what you can to preventively temper your lifestyle and eating habits accordingly.

Second, decide for yourself if you are happy with the trending for cancer research. Do you think we will wage a better war on your particular future cancer with half of today's funding? If someone told you they were reducing your medical insurance coverage by 30 percent in 10 years to match current cancer research funding, would you be happy about this?

Third, ask politicians why they think cancer research deserves to be cut back every year given that cancer deaths eliminate 700,000 voters annually. When politicians tell you to vote for your Second Amendment rights, or a particular position on abortion, make sure you ask them what their position is on aggressive funding of cancer research that will actually save YOUR life and that of the politician!

Fourth, check out the recent Ken Burns and Barak Goodman's PBS Special Cancer:The Emperor of all Maladiesabout the ins and outs of cancer research.

It was narrated by Edward Herrmann while he had brain cancer. He died soon after filming completed.

The program will utterly change your perspective, and get you mad as hell!