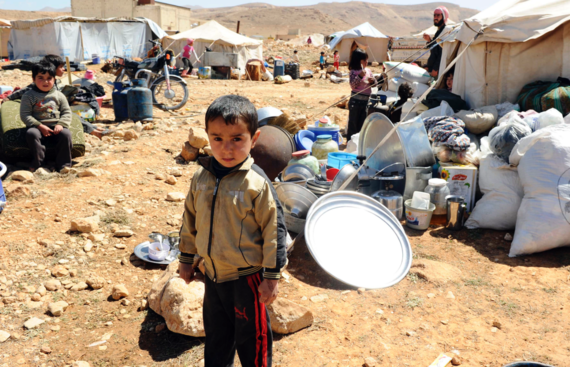 Since 9/11, some 785,000 refugees have been admitted to the United States -- and yet only three of them have been arrested for terrorism-related charges. Today, the FBI's Terrorist Screening Center has more than one million people on its watch list -- a list that grows by more than 20,000 per month.

Because of known or suspected ties to terrorist organizations, there are 98,315 on the Terrorist Security Administration's (TSA) no-fly list; it more than doubled in 2012, and more than 3,000 have been added this year. It is far from perfect -- but at least, under the auspices of the FBI, it represents an attempt by our government to address terrorism.

And yet -- more than 2,000 of these potential terrorists have legally purchased guns in the U.S. since 2004!

How the hell is that possible, you ask? Because our cowardly Congress has refused for years to even consider any kind of reasonable, constitutionally correct restrictions on who can buy these guns -- not a simple background check, not a 30-day waiting period. Nothing.

Why? Because they are beholden to the National Rifle Association (and a limited number of top one-percenters protecting their own interests). The NRA pours millions upon millions of dollars through PACS and kindred organizations to support political candidates who vote against gun control of any kind -- and support opposition to candidates who favor some form of gun control -- along with funding their own aggressive lobbying efforts.

And the NRA rates every member of the House and Senate based on their alignment with, and support of, their aim to arm every last American -- even better along with a right to carry, virtually anywhere.

Of the 261 congressional candidates who received NRA financial support in the 2012 elections, 236 of them were Republicans. Now Republicans control both the House and Senate for the first time since 2006. Most recently, the Senate defeated a bi-party proposal to expand background checks on firearm purchases and close the so-called gun show loop hole by a 54-46 vote, with four senators from each party bucking their party positions.

Both actions are consistent with the party line, the party controlled by the NRA.

(In 2007 -- with support of President George W. Bush -- legislation was introduced to at least prevent these suspected terrorists from purchasing firearms. The Denying Firearms and Explosives to Dangerous Terrorists act went nowhere because the powerful NRA opposed it.)

The Bureau of Alcohol, Tobacco, Firearms and Explosives estimates there are some 5,000 gun shows annually in the U.S., resulting in the sale of thousands of firearms. The Restrictive Gun Control Act of 1968 prevented Federal Firearms License holders from selling guns at gun shows -- but the Firearm Owners Protection Act of 1986 reversed that sensible portion of the Gun Control Act. Today, estimates show that as much as 75% of all firearms sold in the U.S. are sold at gun shows. Private gun owners in 33 states have no restrictions on selling weapons at gun shows to anyone. Zero. Only seven states require background checks for all gun purchases; all seven are blue states.

In 2009, N.Y.C. Mayor Michael Bloomberg's office engaged undercover investigators to attempt purchases at 33 gun shows in Ohio, Nevada and Tennessee -- informing the sellers that they would likely not pass a background check. 22 of the 33 private sellers didn't care -- and made the sales. And 16 of 17 licensed sellers allowed "straw" purchases by known random buyers recruited by the investigators.

If someone is too dangerous to be permitted to fly aboard a commercial aircraft because of known or suspected ties to terrorist organizations, then those same individuals should not be allowed to legally purchase the types of weapons used by those who launched the unspeakable attacks in Paris.

But without such a bill, a terrorist, who is on our government's Terror Watch List, can walk into any one of thousands of gun shows in the U.S. and buy an assault weapon. And then head for Times Square, or a movie theater, or a school and murder hundreds of our fellow citizens.

The Government Accountability Office has reported that, in the past 11 years, 91% of all suspected terrorists who tried to buy guns in America -- more than 2,000 of them -- walked away with the weapon they wanted -- with just 190 buyers rejected, despite their ominous histories.

All of which is obviously okay with our Republican-led Congressional Houses.

What's Congress' solution to keeping America safe? Ban Syrian refugees from entering our country. Which, like their corrupted thinking on gun control, is equally as misinformed and wrong headed. In response to the recent horrors in Paris, 30 governors have publicly demanded that allowing Syrian refugees into the U.S. be stopped. And every one of them -- with the exception of New Hampshire's -- is Republican.

Predictably, every Republican Presidential candidate says we should ban Syrian refugees or, according to Jeb Bush, apply a religious test and accept only Christians.

All of this hysterical refusal to admit vetted, Syrian refugees to the U.S. plays directly into the hands of the jihadists, ISIS, who want nothing more than for these victims to stay home and somehow become a part of their fantasied caliphate.

The facts? Among newcomers to the U.S., immigrants are the most vetted group of all, put through a rigorous process that can take 18-24 months. Several federal agencies, including the State Department, the Department of Homeland Security, the Defense Department, the National Counterterrorism Center and the Federal Bureau of Investigation, are involved in the process, which Deputy State Department Spokesman Mark Toner recently called, "the most stringent security process for anyone entering the United States."

U.S. government data show that less than 2,200 Syrian refugees have been admitted into the U.S. in the last four years -- half of them children. Only half of all Syrian immigrants are approved.

Besides -- it's a lot easier than that to enter the U.S. Aspiring jihadists can enter the U.S. without any kind of visa, and stay for up to 90 days, under the U.S. Visa Waiver Program, which applies to more than 35 countries.

Or -- they can get a student visa. According to Peter Edge, the U.S. Immigration and Customs Enforcement official who oversees investigations into visa violators, they are unable to locate 6,000 foreign nationals who have entered the United States on student visas. "My greatest concern," he says, "is that they could be doing anything." In the past year alone, 58,000 students overstayed their visas.

Since 9/11, 26 student visa holders have been arrested in the U.S. on terrorism charges, as ABC News reported it.

And this: a full one-half of the terrorist attacks committed in America since 2001 were committed by men born in the United States.

Syrian refugees are clearly not the problem, Congress. You are.

Anyone who wants to slam the door shut on Syrian refugees entering this country needs to consider the company they are keeping: in 1939, two-thirds of American's said the U.S. should not accept Jewish refugee children from Germany. And that same year, the United States turned away the USS St. Louis, full of Jewish refugee children. They were forced to return to Europe, where many of its passengers were murdered by Nazi's.

They would not have passed Jeb Bush's proposed screening for Christians only, either.

After the attack on Pearl Harbor, our country incarcerated some 120,000 simply because of their Japanese ancestry on orders from President Roosevelt -- a move a Commission appointed by President Carter found twenty years later was based on "race prejudice, war hysteria and failure of political leadership."