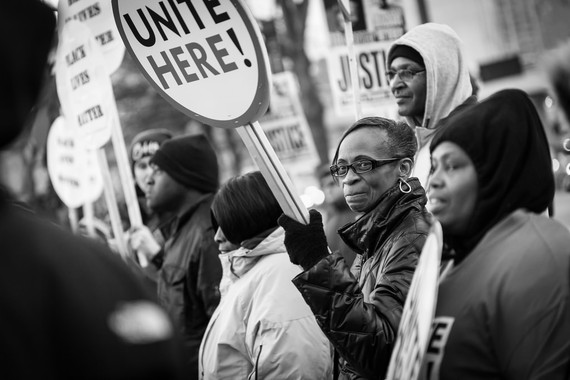 I am 82 years old and somewhat world-weary. Yesterday my grandson asked if I was in despair about the events in Dallas and the killings that preceded them. Yes, I said, I was deeply saddened by it all. I mentioned how I myself had once tried to address such issues. Though my efforts could be considered failures, I felt that they had not been in vain. I took comfort in the thought that though they had ended up on the discard heap of history they had also entered the ether and at some moment yet to come they would magically affect future generations who would learn from them and build upon them. I told him that I remained hopeful about the country and its future.

The year was 1968 and our country was reeling. The war was raging in South East Asia, and the struggle for civil rights was reaching its crescendo at home. Swirling about were massive protests and growing dissent against the War and demonstrations of militancy by Black Americans. When Martin Luther King Jr. was assassinated on April 4, more than 200 rebellions occurred nationwide on that night alone. Serious violence erupted in 38 states and 138 cities.

The unrest was accompanied by a massive and unprecedented level of counter-action by the Police and the National Guard. In the month of April, more National Guard troops were called out than in the previous year. Never before in the history of our country has such a massive military response been mounted against domestic disorder.

Robert Kennedy was a white man who had established an especially close relationship with the Black community. He was a symbol of reconciliation and a promising candidate for President. Only four years before he had expressed his anguish at the assassination of his own brother JFK. On the night of his victory in the all important California primary, he was also assassinated. The nation was coming apart at the seams.

On the campus of the Divinity School at Yale University, far from the disorder, a small program in compensatory education was taking shape. It was a small skirmish, part of the other war, the war on poverty, an articulated national commitment to address issues of social and economic injustice.

The school had been in operation for four years. But in 1968, a small group of educators redefined the enterprise and gave it a new direction. As in previous years, most of the students came from backgrounds of poverty. But that year the student body was especially challenging. Many were alienated from traditional schooling; underachieving academically and written off by their home schools. They were African-Americans from the large cities as well as from the rural South; Latinos from the far West, Native Americans from the reservations of the Southwest and white kids from Vermont and New Hampshire who had never before met a kid of color. For the first time ever, young women were enrolled as students on the Yale campus.

These students were as confused as we were as to the meaning of the events unfolding before them and how best to respond. The external turmoil reflected all too accurately the inner contradictions of our staff and students, bringing sharply into focus the conduct of individual lives as well as that of the nation.

For us it could not be business as usual. One could not simply seek refuge from these forces at our schools and universities. Schooling was part of and not apart from society. Rather than simply sit by idly, reflecting on these events, our schools were morally compelled to step forward--to generate new thinking, alternate visions and active approaches to the events of the outside world consistent with the needs and demands of its students. This was the stuff of a real education, intellectually challenging and spiritually and politically transformative.

We took to heart the words of Paolo Freire, the Brazilian educator, that when we educate for personal liberation, we raise social and political consciousness. We believed that though schools serve primarily as hand-maidens of the larger culture, perpetuating its values, traditions, and myths, they must also play the gadfly, holding the culture accountable, helping shape it in a more humane image.

Central to our effort was our curriculum. At its heart lay the forbidden issue of our culture -- racism. We made discrimination, its nature and its origin, the centerpiece of our learning, using it as the touchstone of identity and a metaphor for the human condition. We examined the issue from all sides, beginning with ourselves, the students and staff, using individual concerns and interpersonal relationships as the primary subject of study. Beyond this was the issue of community, as we searched together for the values that ground people and bind them together.

We lived and breathed these matters daily. Nothing was swept under the rug. We were a vibrant laboratory in the American dream, struggling actively to better understand the problems and potential of our democracy.

Assisting us in our quest was a full range of academic and aesthetic resources, from the great books of the Western literary tradition, to poetry, drama, dance, music, and film. At a time when multicultural education was coming into vogue, we complemented it with the words of "dead white men,"looking to classical literature for guidance in order to better understand the external crises of our day. Their words and thoughts helped mediate the day-to-day encounters between students and staff, illuminating the realms of the personal and interpersonal strife and confusion.

Today, we find ourselves once more at a watershed moment in our history. If educators need a clarion call to step into the current breach, I humbly offer the prospectus for our school, written almost fifty years ago:

This prospectus represents the product of our total reassessment of the Yale Summer High School. We feel that the need exists for a national educational community where, in microcosm, our strength in diversity might be brought to bear on the critical areas of American life.

Our point of departure is the widespread disaffection and estrangement felt by many members of the body politic towards the quality of American life; whether reflected in the Black-White polarization and the spasms of civil disorder that have shaken our cities, or in the apathy and despair of those who have chosen to "turn off."

For many of its most talented youths, as for many of its most gifted adults, America has ceased to inspire commitment. A functional concept of citizenship itself is in crisis; a crisis stemming from the gradual loss of common bases for action and common social goals. As educators, we feel compelled to address ourselves to this problem.

Our effort is directed primarily to those potentially creative youngsters who are in danger of being ignored and discounted by society. We would have them grow into responsible participants in our culture. We would nurture a valid commitment to American society via those young people currently most at odds with it.

However, there exist few values, taken seriously, either universal or uniquely American, which might bind our citizens together. An effort must be made to structure contexts wherein such values might be rescued from our past; and new values generated so as to ground our common choices and imbue them with redeeming significance.

We agree with Socrates that "wisdom cannot be taught", yet feel that contexts can and should be structured where it might best be learned. Nowhere is the need more clearly felt than in the area of race relations; for it is only through the recreation of shared values that freedom will be possible for both Black and White.

Our school would be such a workshop, for young persons, in the problems and possibilities of modern America. It may appear that we are seeking students of heroic dimension, and exhorting them to a heroic task.

Perhaps this is true; but we concur with Max Lerner that one of the saddest things that has happened to American Education has been "the squeezing out of the heroic." Adding this necessary dimension is one of our goals as a model educational community.

It is 2016. Our nation once more finds itself at a critical juncture. We anxiously search for answers, Our failure to fully explore new ways in which a diverse population might learn to live and work together in harmony can only lead to an extension of the present state of thoughtlessness and confusion that now divides the nation. We look to our politicians for answers . But this is an important teaching moment for our country. And politicians are not teachers. Our schools and universities should be leading that conversation rather than simply following or re-formulating that which passes for thought in Washington.

Where are our schools today and the educators who lead them? When will they step forward to assume a leadership role and help show us the way? Might they, at the very least, create a context in which that conversation might occur? When it happens, please let me know. I'd very much like to join in.