A few years ago, Ben, our son with severe autism, got a chance to meet one of his favorite musicians -- or more accurately, meet the man responsible for creating some of his favorite music. We now know there's a big difference, and this "meeting" helped us understand our big guy a little better.

If you're unfamiliar with Bela Fleck, he's not a typical banjoist, having received Grammy nominations in more categories than any other musician (and won a bunch, too).

Ben's been a Bela Fleck fan forever. We know when Ben's a fan of someone because he either (a) requests them a lot, and/or (b) doesn't immediately "request" (anxiously demand) something else when it starts to play.

There is no way Ben could sit through a concert, even if it featured Bela, so he didn't come with us to the Cleveland Orchestra performance of Fleck's Banjo Concerto. After hearing this engaging work, Karen and I had a chance to chat with Bela (we've become friends over the years) and his wife and musical partner, Abby (Abigail Washburn). When we described Ben's love for his music, Bela offered to play for Ben if we wanted to bring him up to their room the next day.

"Ben, we're going to visit Bela Fleck!" I announced when we picked him up. The lack of any visible reaction was expected.

Ben seemed OK when we got out of the car at the hotel, but walking into the crowded lobby, Ben's voice boomed an anxious holler, bringing all eyes to us, nothing unusual for Ben outings. Bela and Abby came down to meet us, and up we went to their suite.

Luckily (or actually, knowingly), Karen brought scones, theoretically for all of us. Ben gobbled every one, chewing while we chatted. His single contribution to the conversation: "Go to the car."

As Ben finished the scones, Bela played for him.

How many people get a private recital by a favorite musician? But even this was no match for autism.

It was as if Bela wasn't there.

Louder and angrier, Ben demanded an end to this ordeal. "Go to the car!!!" 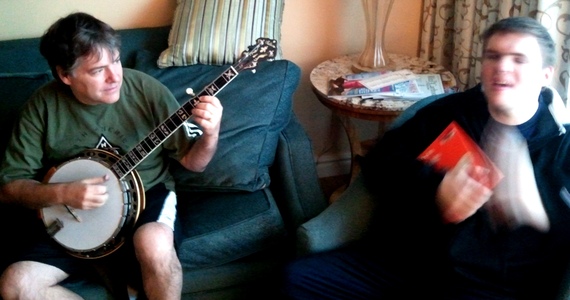 So 15 minutes after arriving, it was time for quick good byes. As the elevator doors were closing, Ben finally said something related to our visit.

"Bye Abby." Ben's always had an eye for a lovely lady.

Odd as it may sound, this experience brought to mind farm animals. Ben talks about them frequently and about farmers, tractors, and all things farm-related, but especially pigs, cows, horses, chickens, and goats. He loves them in books and on video. Bring him to a farm, however, and he might glance at one of the animals as we walk by. Or not. "In person" (or "in live animal") is not the same as in a book. To Ben, the book's much better.

It provided us with another little Benny epiphany (they never end). Music, Ben loves. From where it comes, or from whom, or how it's made -- important info for most typical music lovers -- might mean nothing to him. Sam Bush or Beethoven, Nickel Creek or Thelonious Monk, Brian Eno or Mary Poppins, Bela or Mozart -- the names attached to his favorites might be nothing more than labels. Even if he does connect a person to their music, it is not something he seems to care about.

But Ben sure cares about the music. As with his language, where the receptive piece (language input, written and spoken) is much stronger than the expressive (talking or typing), we know plenty is getting in there. What happens then, due to Ben's autism, can seem like a Black Hole -- stuff goes in, and often, that's the end of it, unless you can catch the clues.

Sometimes they are obvious. Before Ben's autism days began, certain discs, like Peter, Paul and Mommy, would instantly transform agitated crankiness into a silent, mesmerized stare into space while sitting in a highchair eating his mashed meals, more than two decades ago.

Two days ago, driving in the car, at his request we played Schubert impromptus, and Ben entered the same listening zone, staring ahead at nothing.

He knows what he likes. Later the same day, the Beatles weren't doing it for him, and he "suggested" the album Monk's Music instead, another favorite - of all of ours. Ben's requests truly can be music to our ears.

So if Ben has a savant "skill," it's his appreciation of music. Jazz and classical and rock and bluegrass and, oh yeah, Raffi (nobody's perfect) - Ben loves it all and would likely agree with Duke Ellington who, when asked about various types of music, said, "There are two kinds of music, the good kind and the other kind."

It's up to us to nurture that love, and taking it a bit further, maybe even help him connect a little more to the outside world through it. If Ben can never attend a concert, it's not too much to hope he could someday at least enjoy a brief backstage visit.

Maybe one that begins with: "Hi Abby. And Bela." 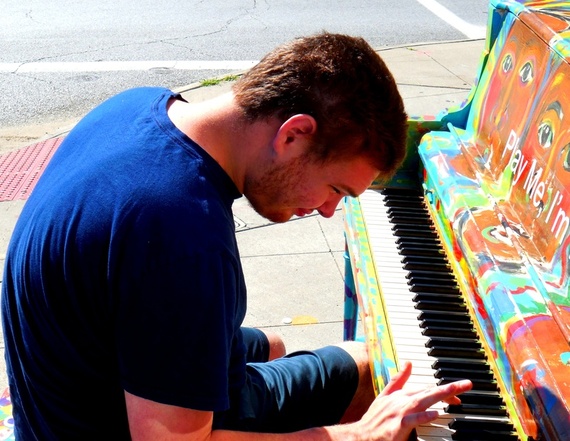 Ben tries out a piano on a street corner dropped off as part of the "Play Me, I'm Yours" art installation that was adorning Cleveland's streets, July 29, 2013