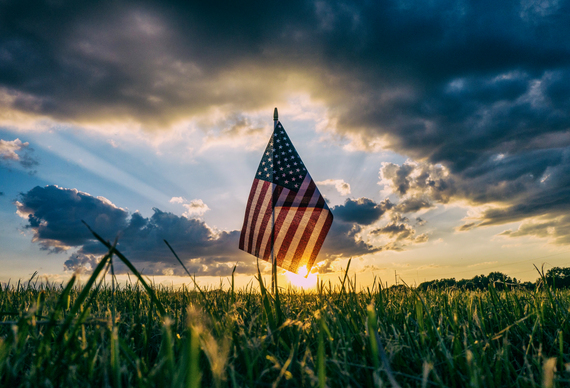 It's tough. We like our presidents admirable. We like them smart and shiny, with verifiable resumes, successful academic careers, a lack of ongoing lawsuits, demonstrably adult speech patterns, and character traits like integrity, honesty, intelligence and political gravitas.

We've had a few of those. We've also had a few who were less so -- less shiny, less honest; occasionally less elected (Bush v. Gore still rankles). But even in those lesser cases there was still the sheen of presidential distinction and stateliness; still the expected standards of respect, decorum, and good manners (even when spun homey by Carter, Bush or Clinton); still the aura of loftiness surrounding not only the office, but the man (yes, still just the man) who held the office.

On Wednesday, November 9, 2016, over half the country woke to the realization that America and its noble assignation of "President of the United States" had been crassly modified -- dumbed-down, diminished, slapped with cheap faux gilt and the bluster of mob mentality. With a hearty blend of lies and innuendo, hackery and foreign intervention, ingrained and relentless sexism, and the low-bar appeal of Trump's thuggish vision of "greatness," the painful blink of an electoral college eye dismissed the popular vote winner (by almost three million) to award our "country 'tis of thee" to a reality-show huckster best known for grabbing women's private parts, tap-dancing past the tax collector, stiffing his students and small biz vendors, and firing hapless B-list celebrities on air.

Heads exploded worldwide as we'd ushered in the "champagne wishes and caviar dreams" of a Donald J. Trump America.

Dramatic, perhaps, but sometimes life actually is as histrionic as purple prose. It allows inane plot twists to proceed despite their being unhinged and unimaginable; it follows story arcs that so clearly lack foundation, sense or substance that we can't believe where the damn things are going or that we're actually being taken there against our will.

But while we liberals, progressives, and other left-leaning folk were busy pulse-checking Nate Silver and following Rachel Maddow like frantic groupies, convinced the sheer lunacy and daily drip of disqualifying factors surrounding the GOP candidate were sure to keep him from the White House, the poison of a campaign corrupted by myriad influences, including our former Cold War opponents, had already been administered; we just didn't know until it was too late for the antidote.

So now we stand with our families, our children, the huddled masses yearning to breathe free, and the question becomes: WHAT DO WE DO ABOUT IT?

We want to look away, ignore the insanity; shut the spigot of endless sensationalism, the idiotic prattling, the tedious, terrifying political posturing, to simply get on with our lives, rebuild our sense of civic stability; focus on the positive activism of people of conscience and compassion. But we can't look away; we can't afford to ignore the large, lumbering elephant soon to be sitting in the middle of the Oval Office. In fact, we must not only keep paying attention; we must keep paying attention with vigilance.

I see the daily posts of outraged citizens, politicians, pundits, cable talkshow hosts, opinion writers, and investigative journalists, all sharing and shouting not only about the latest malfeasance, but asking why NOTHING IS BEING DONE ABOUT IT. How many times have you heard someone remark: "If Hillary Clinton, Bill Clinton, or -- fill in the blank with any name you can possibly think of -- did that, they'd be impeached, arrested, banished, imprisoned, drawn and quartered; charged with treason, but NOTHING HAPPENS TO DONALD TRUMP... WHY?" It's a fair question which I, too, would like answered.

Because how we can teach our children, our growing teens and young adults, to become civically active, to aspire to greatness and reach for the highest ideals, while daily they're bombarded by the murk and corruption of our incoming leadership?

WE CAN'T. Because we will not have that kind of leadership after January 20th. The moment Trump is sworn into office we will lose the perk of having a president, a leader, a representative who is admirable, sharp, dignified, and inspiring. We will, instead, have a man in the Oval Office who is generally the opposite of what we want our children, our teens, our young adults -- hell, our damn peers -- to aspire to. And while that is a tragic and dispiriting legacy of Election 2016, we are each and every one of us capable of transcending and resisting it. How?

By being better Americans than the incoming president:

We are a deeply divided country, but there is nothing new in that. We've been divided from the moment the Mayflower landed and Manifest Destiny pushed some to destroy our native population while others fought for peaceful coexistence; since brothers fought brothers in the Civil War; since World War II convinced some Americans to imprison our Japanese citizens; since the civil rights era made our racial sin a bloody and still-unhealed tear; since Vietnam made us realize not all wars were justified; since Watergate made clear our presidents could be criminals, and since 9/11 gave us a new kind of fear that metastasized into ethnic bigotry and xenophobia.

We have also survived, evolved, and grown. Marriage equality was achieved, healthcare was passed; new environmental measures were implemented. Harriet Tubman got the $20 bill, unemployment hit a new low, and enough women of color were elected on November 8th to make history. We can cross our fingers and hope the new administration doesn't destroy all that forward progress and more, or we can embrace, like it's a mission from God, the task of maintaining and raising the level of integrity, ethics, and honor in our lives and in this country, despite having leadership bereft of those qualities.

The beginning of a new year -- the ending of what was and the dawning of what will be -- seems a perfect time for such pledges. So let's do it. Let's take the task on: no matter what happens with the day-to-day drama of our impertinent, impermanent new occupant of the White House, let's be the kind of Americans we want to be, need to be, to keep our country, our citizens, our "brand" of progress and compassion moving forward.

Remember: his "reign" is temporary. Ours, as Americans, is not.