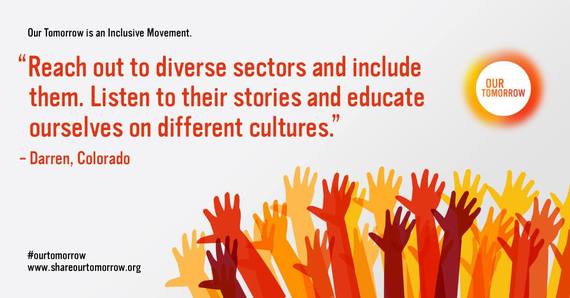 In a national conversation about the future of the LGBTQ movement, many LGBTQ Americans said there was more work to be done after the June 2015 Supreme Court ruling in favor of marriage equality. Results are being released now from the Our Tomorrow campaign, which engaged people across the country in a conversation about their future.

Many who participated in the conversation feared the backlash after the ruling that came in states like North Carolina, where lawmakers took away the hard-won rights of LGBTQ Americans. That experience shows that the road to equality stretches long ahead. Discrimination and hatred in many forms are concerns for many people in the LGBTQ community, which is made up of many different voices and faces a wide range of challenges.

People from all 50 states and all walks of life responded to the Our Tomorrow campaign, sharing nearly 15,000 hopes, fears and ideas. At grassroots events in over 40 U.S. locations or online conversations at ShareOurtomorrow.org, the campaign brought people together to create one of the broadest and most diverse datasets about the concerns of LGBTQ Americans to date.

The release of Our Tomorrow's final report, Insights From the Conversation: What's on the Minds of LGBTQ People?, showed the myriad challenges faced by different members of the community. With the victory for marriage equality, many feared the energy of the movement would fizzle out, leaving many behind and the work unfinished. Currently, 33 states don't provide legal protections against discrimination on the basis sexual orientation or gender identity. People can be denied employment, a home or even service in a store or restaurant. While LGBTQ people can be married legally on one day, they can be fired from their jobs on the very next.

This inequality extends to many aspects of life. One Our Tomorrow respondent, Kevin in New York, painted a vivid picture of the challenges LGBTQ people face with his hope that "we understand that marriage is just the beginning. There are so many issues that affect our whole community. Ageism, HIV stigma, racial profiling, poverty, homeless youth and violence against our community. We need to fight just as hard for all issues and all the people in the LGBTQ community."

This diverse community faces many types of unmet needs. For example, an estimated 40 percent of homeless youth are LGBTQ. Meanwhile, older LGBTQ people struggle with anxieties as their support networks of friends and families dwindle over time.

Events that sparked the Black Lives Matter movement show the important role race continues to play in American society. For LGBTQ people, being a person of color can compound the challenges a person faces. Studies show that Black and Latino transgender people are more likely to experience bias from police officers, leading to higher rates of arrest and assault in prison.

Some called for the LGBTQ movement to rally around people of color and immigrants to address the full range of concerns facing members the community. An anonymous Our Tomorrow respondent said his idea "is for the LGBTQ movement to be centered around people of color and immigrants. Our equality is linked to the equality of everyone. If some of our LGBTQ family don't have it, none of us have equality." 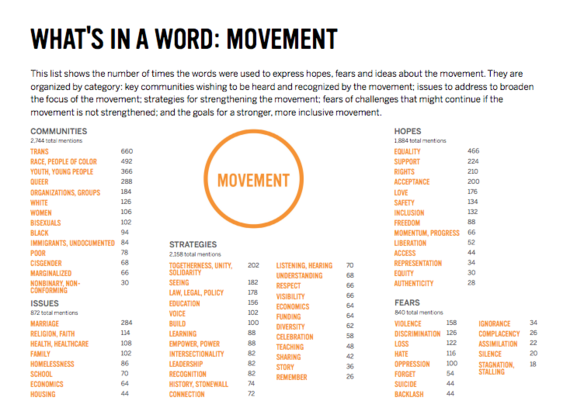 The focus of the LGBTQ movement featured prominently as a concern in the Our Tomorrow conversation. To make it more inclusive, many said the movement must listen to all the different voices that make up the community. Alexandra in New York hopes "the LGBT movement will prioritize needs, experiences and perspectives of marginalized members of the community, including women, people of color, bisexuals, youth and more. In short, my hope is for the movement to finally reflect the community."

Securing rights and protections for trans people was one of the top issues cited by respondents, signaling that people clearly see a need to address the challenges faced by that community. Many also expressed concern for other sexual and gender minorities--including those who identify as queer, bisexual and gender non-conforming, among others--and stressed the importance of their inclusion in the movement. An idea from Marie in California suggested, "One thing our movement can do is include and support bi people, including grants for research about bi people."

Respondents suggested many potential strategies for strengthening the movement, including working "together," in "unity" and in "solidarity" with often overlooked groups to help members of each community overcome their unique challenges. This meant acknowledging the challenges that people face and standing together with other social movements working toward racial justice, economic justice, women's rights, immigration reform and policing reform.

As Michelle in Minnesota said about inclusion and continuing efforts in the movement: "I remember how amazing it felt to win marriage and how grateful I was when people fought for my family and we won. Now that I know what that's like I am HUNGRY for trans people and LGBTQ people of color to have that experience - -not just because of what it feels like, but because of what it means for a better life."

Eliana Reyes is a junior associate at Hattaway Communications, which coordinated the Our Tomorrow campaign on behalf of more than 140 LGBTQ foundations and nonprofit organizations across the country.