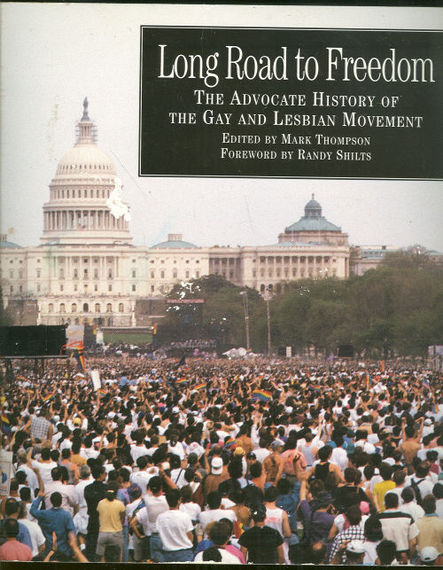 Back in 2008, just as I was finishing an arduous three-and-a-half-year MFA in creative writing program, I was overjoyed to have had the opportunity to publish a story on Advocate.com, the website of The Advocate magazine. My friends and family thought that this was a nice feather in my cap, but to me being published by this particular news organization was symbolically significant, and it carried great sentimental value.

Each of us has our own story of coming out, and for most of us, these stories are central to our lives. I never really regarded being closeted as an option, as a lot of my peers identified me as being gay even before I hit puberty -- even before I had an inkling I was gay. My mannerisms, my voice and interests were telling. When I finally had "the talk" with my parents, in a flurry of tears and uncontrollable trembling at age 17 or 18, my mother's response was at once hard-hitting and comforting in its immediacy of acknowledgment and acceptance. "Well," she said, "Duh, David. If it walks like a duck, talks like a duck and acts like a duck, it's a duck. You've always been a duck -- since you were five years old." I was a little taken aback, if not surprised, by her candor.

Anyway, the year that followed was an awkward period of feeling out my identity -- not so much new as newly unbridled. Newly out. I lucked out not only in my family's acceptance, but also in the timing: Ellen Degeneres came out in 1997, around the same time I did, and watching her historic "Puppy Episode" with my parents diffused all lingering tensions (which were mostly mine, by the way; as my mother suggested, my parents always assumed I was gay... being able to integrate that reality into daily life and not prance around the eggshells of the issue was, I think, more of a challenge for me than it was for them).

But months before that episode of Ellen -- whose importance I really can't give enough credit insofar as opening up dialogue and raising the everyday comfort level in being myself to the world -- my parents had made a grand gesture of acceptance that told me "we know who you are and we love you." On Christmas morning of 1996, I peeled away the wrapping of a heavy block of pages to find a book called Long Road to Freedom: The Advocate History of the Gay and Lesbian Movement. The cover featured a timeworn photo of the Capitol Building in Washington, D.C. with a sea of people filling the foreground in front of it. Among those people, a few rainbow flags could be seen.

My mother, a child of the '60s, always wanted her kids to be advocates... or as I saw it, assemblers, protesters. I always felt she saw the children of the 80s and 90s as a lost generation because we didn't attend to political issues, and we didn't understand why it was so important to gather in masses and protest as her generation did. Over time, I've come to understand why she felt that way. But in truth, I never read through that book to learn about the gay and lesbian movement's history; still, though, its title was imprinted into my mind forever. And from that title, especially, "The Advocate" came to mean something so, so important: acceptance of my whole and complete identity.

So shortly after that time, I became a subscriber of The Advocate and OUT magazines -- sister publications -- and when I was young, I paid a great deal more attention to Out's glossy pages, which featured celebrity icons and fashion. As I always was always drawn toward entertainment and by an unusual twist of fate ended up working at an entertainment-based organization (in Reston, Virginia of all places!) from ages 19 through 30, the first page I read was always the last: Brandon Voss's "Big Gay Interview" page. The interviews were usually relatively superficial, but meaningful nonetheless because each month a new celebrity agreed to be featured in a gay magazine and to discuss, on some level, gay people and gay political issues. I'd guess any Millennial reading this is thinking "So?" but in the mid-1990s, there was at least a marginal risk for any high-profile person (and particularly men) to be associated with the LGBT community. I remember thinking that this Voss guy had a dream job.

When my first article (a glowing review of a Britney Spears album -- go ahead and judge) appeared on The Advocate website, the symbolic weight was huge for me. Over time, I had the opportunity to interview people I admired and found interesting, from Kathy Griffin (who surprised me with a serious discussion of Matthew Shepard's life and legacy) to Jewel and Sarah McLachlan (big deal for a Lilith Fair-era kid!). 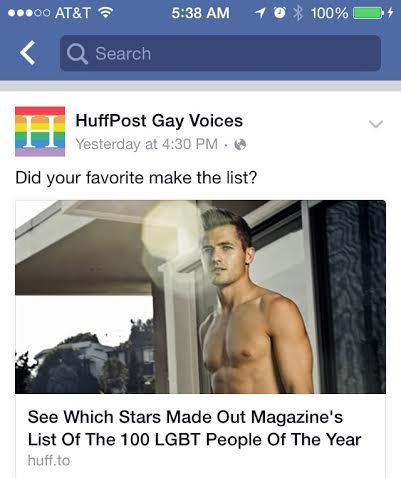 I woke up this morning to a Facebook promotion of the annual "OUT 100 list" -- a hundred high-profile people who the magazine determines to be of great influence. As can be expected of most media these days, but almost a given for gay-centric outlets, the photo that accompanied the article was a tanned, naked-to-the-waist young man who appears to have been sculpted by Michelangelo. Turns out he is Robbie Rogers and one of the people selected for the list. Clicking on the story revealed that the number-one person of the year is Cait Jenner.

I am aware that I'm probably oversensitive about the uber-sexualized, youth- and fitness-focused images that always seem to be paired with depictions of gay men. Especially since my lifestyle has been forced to change, and my body with it, because of a chronic illness, these Stepford images trouble me. If Cait Jenner is the number-one person of the year, why did the article teaser feature some hot naked dude? For clicks, presumably -- because this is a proven way to garner more reads. I get that.

But what surprises me -- and something I think we should pay attention to -- is the comments posted by readers to Facebook in response to the story:

OUT Magazine is all for the young and beautiful. Cancelled it. The true 100s are the ones of us around the world living and struggling to live normal or life threatening lives.

While genuinely good magazines, like The Advocate, either cease publication or are only available in a panderously watered-down version of their former selves as an add-on to one's OUT subscription.

Is it a beauty contest?

As I've said, I have sentimental and nostalgic feelings for both The Advocate and OUT magazines, and I'm not highlighting these responses to reflect my feelings about the publications. But I do think they are telling and useful.

The Advocate History of the Gay and Lesbian Movement that my parents gave me was published in 1994 and is now outdated. The gay and lesbian movement is now the LGBT movement: it has grown to become more inclusive. And somehow at the same time, it has become at least in pictorial presentation more sexual than political. The book my parents gave me as a gesture of support was bought, I'm certain, based in large part on its cover image. "This is a movement," that picture said, "no different than the Civil Rights movement." It featured people fighting for their rights in Washington. It did not feature a half-nude male model, or a mostly nude actor or athlete who looks like a male model. It was more Laverne Cox than Robbie Rogers. Would my parents have given me a book with a male pin-up boy on the cover? I don't know, but I doubt it. Books often are judged by their covers, and had a more sexualized editorial choice been made for that book, I'd be missing a key part of my coming out story and my bonding experience with my family.

To the point of the first commenter quoted above, when I interviewed Dustin Lance Black a few weeks ago, he told me that on his annual speaking tour of colleges and universities around the country, the most commonly brought up questions from young people have to do with transgender rights and the need to coalesce LGBT civil rights and the civil rights of black Americans. He didn't mention anyone asking questions about hot people. Skin and muscle may be what initially draws attention, but it's not what keeps it.

I think that the LGBT media would be wise to think beyond online clicking and ad conversion rates and ask themselves what the majority of Facebook commenters observed and asked: Does the gay community boil down to a beauty contest? (It does feel that way much of the time.) is the visual presentation of who we are pandering? Does it really represent us?

Of course, newsstand magazines can be expected to put attractive -- impossibly attractive, computer-altered -- models on the cover. But with reader reactions being what they are, maybe it's time to reconsider how our community is framing itself for ourselves and for others to perceive us.

The 2015 OUT 100 List is missing key figures such as Laverne Cox (in my opinion a much better-quality spokesperson for the trans community than Jenner, even if she makes the news less often), but overall it is a strong and diverse group of people that includes the likes of Cynthia Nixon, Andrea Pejic, Lily Tomlin, Diana Nyad, Prabal Guring and a great diversity of other accomplished and influential LGBT individuals, the vast majority of whom couldn't (and quite possibly wouldn't want to) pass as ancient Greek statuary figures if whitewashed and left out to dry in a courtyard. I can't lie; years ago, when I noticed that each issue of a major LGBT magazine to which I subscribed featured a monthly "nipple count" -- literally, a tally of the number of men's nipples that were pictured in each issue -- I sent a letter stating my disappointment and I unsubscribed. Doing so made me feel like I am becoming a humorless curmudgeon, but the greater part of me couldn't deny to myself that that's just not my identity: I'm not a nipple counter. I'm a gay man who wants to feel that I belong to a community that reflects me as a person, not as a slab of meat that should conform to a specific body type. Just like the people who are commenting on Facebook.

Both OUT and The Advocate still have relevance and merit in 2015, but the Grindr-style photos (albeit with more famous faces) that are so often featured betray the quality of content that's often buried among the pictorials. The OUT 100 List actually features only a few modelesque cover boys, but their images are invariably the ones used (at least online) to snag readers. That's unfortunate, because the readers who respond are asking for a different kind of representation, a greater depth that reflects them as human beings, not teenagers looking for a heartthrob of the month to pin up to their bedroom walls.