As the South's major hub city, Atlanta's restaurateurs are in fierce competition among restaurateurs seeking to attract locals, tourists, and both national and international business. So for more than two decades, the city has been home to every kind of ethnic, plenty of steakhouses, and a ballast of places that are part of Southern culinary tradition. Here are some of the new ones I like. 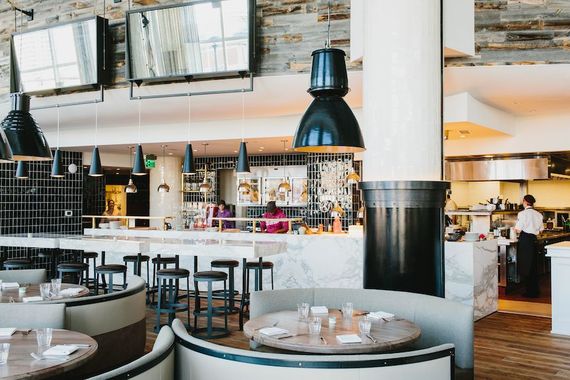 Chef-restaurateur Ford Fry has may have developed into Atlanta's golden boy, having opened the bellwether seafood restaurant The Optimist, then the meat-centric King & Duke--he was also Justin Bieber's personal chef for three months this year--and now an Italian seafood restaurant named, for no particular reason after Saint Cecilia, patroness of musicians, all this in the last three years. That's a lot of activity for a corporate chef (he also owns the Southern-style JCT. Kitchen and a place in nearby Decatur and is about to open a Mexican restaurant, too), and I wonder if all his enterprises have maintained their original quality.

When I visited St. Cecilia, it was pretty new, and the kitchen and service staff were clearly stretched and stressed. This used to be another wonderful seafood place named Bluepointe, and the bones of the soaring building are still there, with vast amounts of glass, hanging lamps, subway tiles, and wood, but nothing at all to tamp down the achingly loud noise level.

The room is huge and so is the menu--far too large to allow the kitchen to serve hundreds of guests beyond a "get-'er-done" efficiency. Odd, then, the menu reports that it "changes daily," meaning little or no time to perfect a dish. No surprise, then, that the crudo seafood dishes ($11-$18) are the best way to go at the beginning because they need only slicing and seasoning rather than long, careful cooking time. So, too, the excellent salumi offerings ($14-$19) of meats and terrines.

Oversaucing and elaborating most of the eight pasta selections works against them. With the exception of a delicious agnolotti filled with braised short ribs and dusted with Parmigiano ($12), the rest I tried fell flat, including caramelle with smoked eggplant, tomato sauce, salsa verde and ricotta salata ($12) and corn-filled ravioli with polenta, lobster and mascarpone ($14). Only a chef unfamiliar with Italian pasta-making would marry polenta on a plate with ravioli, which in the South would be like putting grits on top of mac-and-cheese. Risotto ($15) with clams, always difficult to get to the right texture, was overcooked that evening. 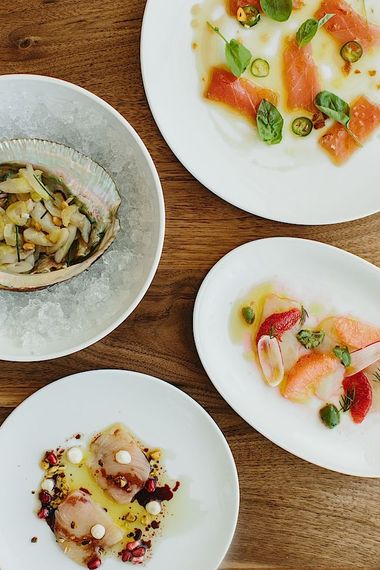 As at The Optimist, the main seafood courses ring truest: a wonderful porgy with grilled lettuce, cucumber and capers ($47) and a whole loup de mer with Marcona almonds and acidic citrus ($29) were impeccably cooked. Swordfish was well rendered, simply combined with olives, tomato and garlic.

Clearly roast chicken dish and a strip steak are on the menu solely to please non-seafood eaters, and they taste that way. The chicken ($18) was not juicy but watery, perhaps from over-brining.

Desserts (all $8) need tweaking: I liked dark chocolate mousse ($8) and a crème brûlée tart, but raspberry crèmeux, chocolate budino and coconut milk panna cotta were bland, as if prepared in large batches to serve so many people.

It might be time for him and his group to slow down, collect their thoughts, make everything work smoothly, and focus in on their strength, which is clearly fine seafood. And think about some sound control. 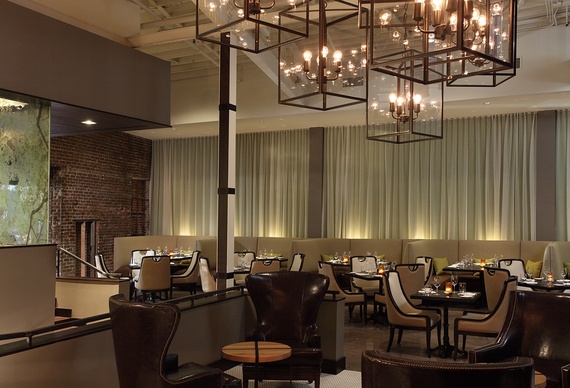 Located in the Emory University area of Druid Hills, Ink and Elm was opened by Nick Chaivarlis, Hunter Jefferson, and Keith Osborne a bit over a year ago and named to honor the neighborhood's designer Frederick Law Olmsted. Ink & Elm: According to the restaurant website, "`Ink' is an allusion to Olmsted's renderings, while `Elm' refers to his "favorite type of tree. . . used to adorn the streets of Druid Hills in the 1890s."

Inside there are three ways to dine in the cavernous 7,300 square foot space--in the Tavern, Dining Room, or Lounge. The first serves cocktails and sandwiches, the last oysters and charcuterie plates. The dining room is large, the tables commodious, and the chandelier lighting and colors throughout make the room darker than it looks in the photo. This includes dark wooden tables without tablecloths that would reflect light and dampen sound, which is absorbed only by tweed banquettes and a curtain of sheer fabric. There's a truly lovely window on the kitchen overlaid with a photograph of elm trees in the local Lullwater Preserve elm trees.

Executive Chef Stephen Sharp has a fine flair for modern American fare, putting emphasis on Southern ingredients and seasonality. And he keeps prices in reasonable line, perhaps so that those Emory profs can dine here occasionally.

The food has heft, it's hearty, and it's often deeply flavorful, dependent on the high quality of ingredients. Still, the dishes can be overloaded and messy. Heirloom tomato with pickled okra, Vidalia onion, cucumbers, lady peas, herbs and soft boiled egg and dilly vinaigrette ($14) was all about summer. Veal sweetbreads ($14) came with a sweet date puree and spinach adds a foil, with pine nut pistou, feta cheese, Port pear and naan Indian bread--way too much to allow the delicate flavor of the sweetbreads to shine through. The best dish I tried was a generous appetizer plate of luscious, succulent Georgia shrimp (below) with toasted butter, smoked ham broth, pickled peppers and charred bread ($14), which I would gladly gobble up as a main course. Pole beans and burrata came with peaches, spiced pecans, sunburst tomato, zucchini puree and shallot vinaigrette ($13); again, the cream-centered cheese got lost in the rest of the ingredients. 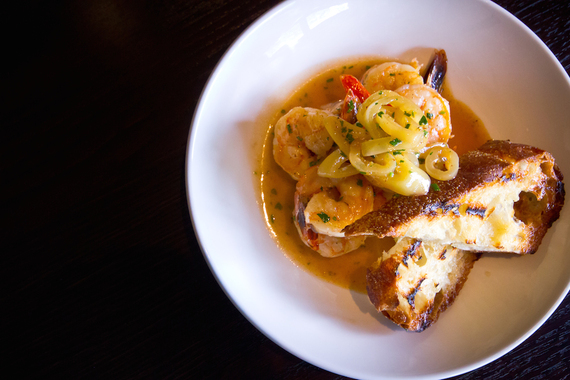 Entrees include a beautifully cooked and well presented trout with rock shrimp, carrot salsa verde, baby carrots and a fennel confit ($35), which just skirting being too many flavors on one plate. Carolina pork with smoked belly, ham steak, garlic sausage, field pea succotash, pole beans, leeks and a pork demi-glace ($27) is more than enough food for two people and speaks mightily of how good Southern cooking can be. So, too, does the grouper with eggplant, okra, squash, preserved tomato, purple peppers, corn and celery ($28), though few traditional Southern chefs would ever pile so much on a fish. Another big-hearted dish is the duo of lamb ($34)--braised shank, crȇpinette, smoked peach, harissa for bite, bulgur, pickled cucumber, fava beans, and almond gremolate. Obviously, with these kinds of main items you don't need any side dishes.

You may also be too stuffed for desserts, and they are not lightweights. But they're terrific, not least the sticky cinnamon bun with pecans, sorghum, bourbon glaze and welcome white cheddar ($9) and the butterscotch pot de crème with pumpkin butter, chocolate gingersnap and whipped cream ($9).

My eyes are now a bit blurry and fingers sore just from typing out those myriad ingredients dispersed with too much unbridled enthusiasm and little discrimination as to whether they all go together. Simplifying the menus and clashing flavors would make Ink and Elm a much better restaurant than it already is. 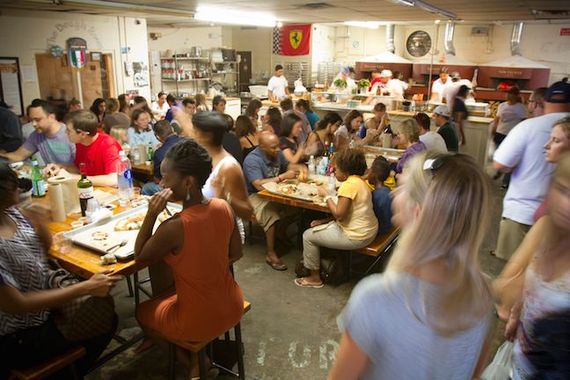 The Gio in questions is an ebullient fantasizer named Giovanni Di Palma, who has singlehandedly, with very little money, created his own tiny Little Italy, starting off with a casual eatery that specializes in his mother's lemon chicken, adding a little Italian sausage and cold cuts, more chicken dishes, and basic macaroni dishes with peperoncini and tomato, marinara sauce with smoked scamorza cheese, and a few others. Don't be misled by the prices of full portions here--$38-$43 for the chicken--for they are meant to serve at least two people.

Across the way is his Pizza Antico Napoletana--a madhouse of first-come-first serve, sit anywhere communal tables, and it's B.Y.O.B. (Bummer.) There's a list of ten pizzas--no slices!-- from $18-$22, only produced "until the dough runs out." At meal's end you an get a cannoli or sfogliatelle pastry. The place has had a lot of celebrity sightings, including Chris Rock and Owen Wilson. Di Palma himself, who contends he was once so poor he slept in his Dodge Challenger, now drives to work in an Aston Martin.

Other buildings on the expanding property include a Bottega and a Gelateria.

You can't fault Di Palma's exuberance and good cheer, but local media report often on how Di Palma seems always to be getting in and out of hot water in various dealings. I am certainly not in a position to offer any opinion on -- they include a contentiously embattled failed IT Company, a messy public divorce, numerous lawsuits, and, a few weeks ago, an investigation by the Federal Department of Labor.

Still, Di Palma's not the first entrepreneur do go through such self-inflicted trials and tribulations, so I hope they all shake out and he can get back to doing what he loves--creating a Willy Wonka-like Little Italy out in Westside. 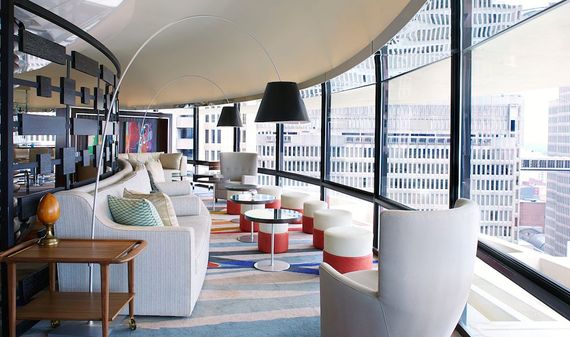 Back in the late 1960s the revolving restaurant at the top of the Hyatt Regency was all the rage, though more for the view than for the food. It lasted as a tourist attraction for decades but finally shut down. Now, having undergone a total renovation by Johnson Studios, it is called the Polaris Restaurant, re-opened this past June.

It features small plates at a variety of perches on the 45-minute rotating platform that gives you a 360-degree view of Atlanta's skyline, which only recently has acquired much architecture that's interesting to look at. Most of downtown looks like it was built by the Veteran's Administration.

The dining zone features a custom walnut communal table; the library and living room have lounge seating and sectional sofas and screens; the bar is where a good deal of the nightly action takes place, especially at sundown. Throughout there is a lot of bold modern artwork and sculpture, and the ceiling is finished with a remarkable, unnoticeable polished material that sucks up noise. More restaurateurs should find out about this.

I hadn't the time to dine at The Polaris, but I found the place a pleasant diversion in the otherwise dreary downtown. And after all these years, it's still fun to zoom up the atrium in those original John Portman elevators.