Banksy may have lost at the Oscars last night, but he scored another less visible -- but much more important -- victory earlier in the week, when a Russian judge accepted his offer to post bail for two members of the Russian anarchist art collective Voina who have been detained under horrendous conditions in St. Petersburg. A judge had initially rejected the offer, but on February 24 he finally accepted the British street-art star's cash, which amounted to about $10,000 each for artists Oleg Vorotnikov and Leonid Nikolaev. Now they have been released from custody, though the case isn't closed and the charges still stand. 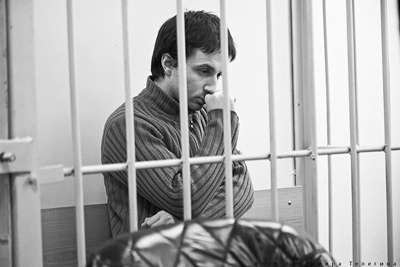 Voina artist Leonid Nikolaev, pictured in prison on January 14th, has been bailed out by Banksy along with Oleg Vorotnikov. Photo by Vladimir Telegin

The pair had been held in St. Petersburg after being picked up last year -- and reportedly brutalized -- by Russian police. Known for flamboyant and often defiant anti-authoritarian art actions, Voina saw its two artists detained after "Palace Revolution," a performance in which members overturned cop cars in protest of abusive authority. Reports on their plight had attracted international attention -- Banksy supposedly heard about them on the BBC -- as well as leading to persecution from authorities inside, according to the men. Last week, Nikolaev's lawyer had filed a case with a the European Court of Human Rights claiming that authorities had neither cited sufficient evidence against them nor justified holding them indefinitely in pre-trial detention.

Voina is nothing if not relentless. While in jail for "Palace Revolution," a separate work by the group, "Penis in FSB Captivity" -- for which group members had spray-painted the outline of a penis on a drawbridge facing the headquarters of Russia's security services so that it appeared to become erect when the bridge was raised -- was shortlisted by Russia's culture ministry for a state creativity prize. The honor would seem to have provided some leverage for the group, but Voina would have none of it. In a statement issued after the announcement, Voina's Alexei Plutser-Sarno stated: "We consider the Innovation award as a proposal of dirty money from the Mafioso-like authorities -- by giving artists a dole, they test them for conformism and loyalty to the executioners of the Russian contemporary art." (He further condemned the nominating committee for softening the title of their nominated work from "Penis in FSB Captivity" to "Member in FSB Captivity.")

In the face of this intransigence, the culture ministry has backed down, dropping the work from the prize shortlist after Voina refused to allow a picture of the work to be used on the prize's Web site, according to the Associated Press. Plutser-Sarno was quick to condemn the act, writing on his blog, "The repressive act of removing the Voina group from the award brings shame on the [organizers] and the Culture Ministry."