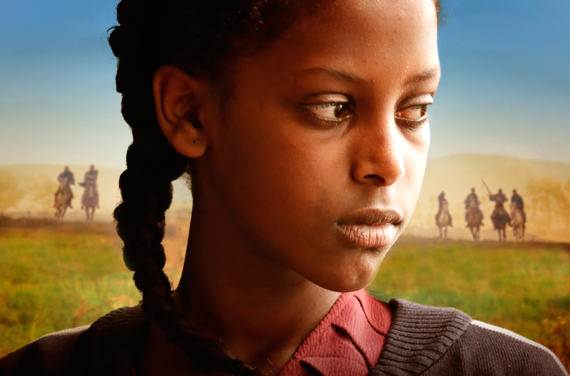 Humanity is no stranger to violence. In the realm of cultural traditions, fossilized within the resin of generations, there is both happiness and hatred.

Violence is justified by those who cling to the past. Assurance that they, too, will be preserved.

But traditions, like technology, become archaic over time. No matter the pace, there comes a moment when humans grow out of a thing once considered essential. Stone turns to metal, metal turns to plastic; priestesses step down from altars to make way for priests.

Where females once ruled many societies, a strong male wind blew in and reshaped cultural landscapes like the shifting sands of a dune. Patriarchy replaced matriarchy. Women bowed their heads and pulled their robes closer. Sometimes, they even covered their bodies completely so that only their eyes blinked at the bright sun, windows to souls hidden beneath fabric and oppression.

Difret is a new film from executive producer Angelina Jolie that paints a poignant picture of a controversial Ethiopian tradition and the inevitable shift that accompanied it. It chronicles the extraordinary, true story of a 14-year-old Ethiopian girl, Aberash Bekele (called Hirut in the film), who is abducted and raped in the accepted custom of telefa and subsequently arrested after killing her captor in self-defense. Her unlikely savior is headstrong female lawyer Meaza Ashenafi, a woman bent on justice for the young girl and legislative acknowledgment of an abhorrent practice. Jolie insists,

Difret not only shows the tenacity and strength of two remarkable Ethiopian women and brings the world's attention rightfully to these two real-life heroes, but it also shows the extraordinary talent and creativity of Ethiopian filmmakers.

Equality has never been a strong suit of our species where social structure is concerned. Countless examples still exist today, in an age of advancements completely unimaginable to those who ushered in now-outdated traditions, centuries ago. We have successfully sent spacecraft to the fringes of our solar system while children are still sold into marriage. As recently as 1994, in Ethiopian society, girls like Aberash were hunted in villages, scooped up without warning by strange men; abducted, raped and forever bound to their captors.

This was the deep-rooted Ethiopian tradition of telefa, now illegal thanks to the two real-life heroes whose stories are told in Difret. Rape was not rape if a girl was already bought and then married by her assailant. Her family often had no choice. This is how their world worked: slavery, cloaked beneath the shiny articles of marriage.

Zeresenay Berhane Mehari, who goes by "Zee", is the writer and director of Difret and a born and raised Ethiopian. He is as familiar with its old traditions as with its modern ones. Difret is a passion project for Zee, who tells me in a podcast interview for EVOLVER Show (audio embedded at the end of this article) that Meaza Ashenafi's story is what led him to discover the impact that her work had on his country's history. "Meaza really lent her talent to those who didn't have a voice... this story is about a really, really big turning point in the way we talked about violence against women in Ethiopia."

Zee's colleague Mehret Mandefro, one of the film's producers, agrees. "This idea of how do norms actually change in a country is a really interesting question that's not specific to Ethiopia... issues that affect women and girls are actually pretty widespread," she adds. "How does this happen? What's the risk for the people who help change a culture?"

Mehret is an Ethiopian-born, American-raised doctor and anthropologist. She is a woman who has enjoyed both the beauty of her heritage and the perspective that comes with opportunities afforded to her in another land. President of the nonprofit Truth Aid, Mehret champions the idea of storytelling to inspire change. Her organization supports artists telling stories through various mediums to shed light on injustice.

Ethiopia is a place where the origins of humanity can be found, where the earliest iterations of our species drank side by side with hippos and antelope on the fringes of a vast lake, eventually evolving, separating themselves into tribes that migrated across land and sea. A tradition like telefa seems as old as the rocks upon which it was founded. The sad fact remains that the practice of abducting child-brides -- perhaps the cruelest form of slavery -- is still practiced throughout the world, whether illegal or not. Difret is a shining example of what can happen when just one candle is lit. With a little light, the world sees the truth. Change was brought to Ethiopia by a single woman seeking justice and a shy, scared teenager who pulled the literal trigger that launched a cultural upheaval.

The film is a work of art; engrossing, emotive and exquisitely shot. Its cast of Ethiopian actors are largely inexperienced. For 80 percent of them -- including Difret's young star, the brilliant Tizita Hagere -- this is the first time they have ever acted. Incredibly, none of the actors met their real-life counterparts prior to filming. Each and every performance in Difret is award worthy.

"This goes a long way to show that there is a lot of talent in Africa that people do not understand," director Zee insists. The smile in his voice is audible.

Difret has won the Sundance Audience Award, World Cinema Amsterdam Audience Award, and Montreal's Festival Du Nouveau Cinema Audience Award, among others. The world loves this story, precisely because at our core humans are linked to one another by love and compassion, despite whatever social constructs we are bound to.

In Amharic, the word difret means "courage"; in its secondary, less common use it means "the act of violence." If Difret is an affirmation that two woman with an abundance of courage can singlehandedly change history in the face of violence, there may be hope for equality after all.