In September, 90 House members banded together in a letter to the White House stating that they would vote against any further funding for the war in Iraq. The group hoped to show the Democratic leadership that a growing number in their party were insistent on ending the war before the end of George Bush's presidency. 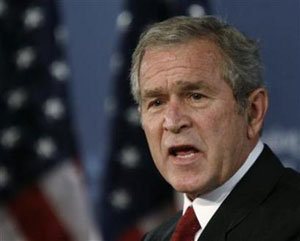 The "Out of Iraq" letter signatories are still holding firm to their no-funding pledge. But with President Bush threatening vetoes and setting up Democrats for a fight over the 2008 emergency war budget, some House members seem less optimistic about the impact of their stand against the war.

"I think that they will be able to get the votes to pass the supplemental budget unfortunately," said Rep. Ed Towns (D-NY), a veteran congressman who signed onto the letter, in a Tuesday interview with the Huffington Post. "There are enough people that will support the President on both sides of the aisle, and they will use the argument that you cannot walk away from the troops, they have to support troops, and that's the reason that many of them will support the supplemental."

Rep. Steve Rothman (D-NJ) also spoke of the difficulties in persuading colleagues to draw a sharp line against any war funding, and put some onus on the Democratic leadership.

"Let's see what the future holds," Rothman said when asked whether Speaker Nancy Pelosi and other top Democrats are pursuing the right strategy to end the war. "I'm hopeful that our leadership will have a better appreciation of where my colleagues are in the Congress and where the American people are, and they will propose appropriate measures to help us speed up the withdrawal of the troops.

"I trust the House leadership will work with our caucus to determine how to move forward," Rep. Chris Murphy (D-CT) similarly told the Huffington Post, noting "the deafening public sentiment that this war needs to end."

Still, despite slim support from party leadership, a number of the 90 members who signed onto the letter say they are ready to sustain their votes against the supplemental war budget.

"She's not going to vote for anything that isn't within the goals of the letter," confirmed Kevin Lawlor, spokesman for Rep. Ellen Tauscher (D-CA), chair of the moderate New Democratic Coalition.

"He voted against the last supplemental, and I assume he'll vote against this one as well," said spokesperson Danny Rodert. "The President wants to keep dumping money to expand the war and to surge, and that time's over. We need to move toward redeployment of our soldiers."

But a Democratic staffer for one letter signatory admitted that some votes could be sloughed off in the right circumstances. For instance, if the Democratic leaders decided to attach the supplemental to a measure sought by House Democrats, like they did with the minimum wage, signatories might feel forced to change their vote.

"It really depends on what the final bill looks like," the staffer acknowledged. "In the past they would keep these bills as stand alone legislation, and you would have members of the Progressive Caucus vote against, and a lot of Republicans vote for it. But it's much worse when it gets attached to something else everyone wants to pass. And that's a question only the leadership can answer."