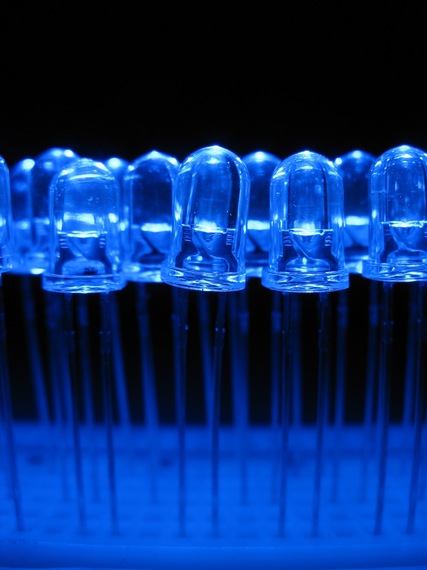 The Nobel Prize in physics was awarded last week to Isamu Akasaki from Meijo University, Hiroshi Amano from Nagoya University and Shuji Nakamura from the University of California at Santa Barbara, three scientists who helped perfect the technology of the light-emitting diode (LED).

For us non-physicists, here's the take-home message: Blue is the new blue.

The blue-light beams they invented are crucial for making the white-light LEDs that are so much more efficient as light sources than incandescent or fluorescent bulbs. The LED's light comes from a mixture of red, green, and blue.

Red and green were easy, but blue was more complicated; the three scientists, working independently, devised a way to create a semi-conductor that emits blue, thus enabling the LEDs that illuminate our phones, televisions, and computers. (Blue light, with its very short wavelength, allows information to be stored more densely than other colors, hence the blue lasers used for Blu-ray discs.) But Akasaki, Amano and Nakamura are far from the first ones to have operationalized the density and intensity of blue.

The color has more than held its own on the ROYGBIV spectrum from ancient times up to the present. The Nobel Prize-winning breakthrough actually represents a discovery of what was "always-already" (Karl Marx's term, via Kant; another way of putting it is, as the song from All That Jazz goes, "Everything old is new again.") I don't mean to diminish the import of the physicists' technological "capture" and "framing" of blue, but they provide an opportunity for us to reflect back on the cultural potency of blueness, which existed resplendently long before they engineered it in their laboratories.

In Judaism, the blue of the Mogen David on the Israeli flag is a modern incarnation of the color whose splendor dates back to biblical times: The ceremonial robes worn by high priests are described by the Hebrew word ''tekhelet," used dozens of times in the Bible to characterize the color featured on the robes of the high priests, the fringes of the tallit (prayer shawl), and the tapestries in the Tabernacle.

Both Islamic and Jewish culture use an amulet of blue (a "hamsa" in Hebrew, "khamsa" in Arabic, "nazar" in Turkish) to ward off the curse of the "evil eye." In many Middle Eastern countries, the color is thought to have a protective force, which is why doors and shutters are often painted blue.

In Christianity, the Virgin Mary is frequently depicted cloaked in blue, perhaps most gloriously in the famous Chartres Cathedral window known as "La Belle Verriere." The formula for making the blue glass used in this window has supposedly been lost to humankind, and the exact composition of tekhelet, too, has been debated for centuries, though an Israeli chemist recently claimed to have found and analyzed an original sample of the dye. The Nobel laureates are in good company as they work to create (or recreate) the color blue.

As far back as the Neolithic Age, the blue of lapis lazuli was one of the first aesthetic commodities to generate global trade, and a millennium ago, Chinese cobalt blue porcelain similarly mesmerized people around the world with its stately hues.

Picasso's blue period and the musical genre of the blues are two of many examples that illustrate how the emotional condition of depression is "inscribed" in the color blue. Picasso's paintings from 1901 to 1904 depicted tawdry subjects -- lonely, damaged, emaciated, beaten-down figures -- wrapped in a smothering, deadening haze of blue. In blues music, by contrast, while there's often an underlying resonance of suffering that emanates, fundamentally, from the indignities of slavery and its aftermath, there's also a kind of energetic musical catharsis and transcendence: turning lemons into lemonade, to use a banal (and inappropriately yellow) cliché. For Picasso, perhaps simply the fact that his blue period ended -- he finally painted his way through it and returned to a more varied palette -- represents a comparable kind of emergence.

Another depressing incarnation of blue appears in Toni Morrison's 1970 novel, The Bluest Eye, where the title image symbolizes a racist standard of beauty that oppresses, in its elusiveness, the young black protagonist Pecola Breedlove.

The color's bleak associations long predate the 20th century, though. The idea of a "blue devil" as a harmful or malignant demon that causes melancholy dates back to the 17th century, according to the Oxford English Dictionary; the blue devil induces low spirits and despondency. "Laughter is a more powerful Exorcism of those blue Devils, which too often possess our poor mortal Fabric," a writer explained in the Publick Register in 1741, "than what can be perform'd by a Conclave of Cardinals."

At the extremes of either exaltation or gloom, blue has always glowed with intensity, embodying an energy that is reaffirmed by the LED technology that was celebrated this week.

Blue skies, blue oceans, the "blue marble" photograph of Earth from Apollo 17 that changed the way we saw our planet in the universe: All these suggest how our visual and artistic sense of the color draws on its omnipresent natural majesty. No offense intended to red, orange, or violet, which are all lovely colors and may someday generate their own Nobel-worthy discoveries, but blue, clearly, takes the prize. In his poem "High Windows," Philip Larkin magisterially describes the ineffable vastness that this color imaginatively evokes:

"Rather than words comes the thought of high windows:
The sun-comprehending glass,
And beyond it, the deep blue air, that shows
Nothing, and is nowhere, and is endless."