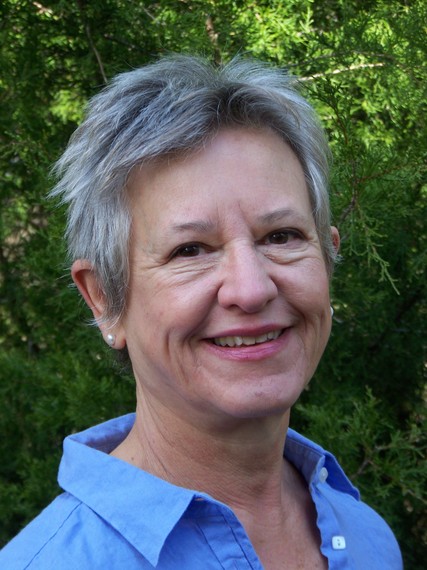 Trudy Nan Boyce received her Ph.D. in community counseling before becoming a police officer for the City of Atlanta. As a police officer for more than 30 years, she worked as a beat cop, homicide detective, senior hostage negotiator, and in the Special Victims Unit, among other assignments.

Out of the Blues, her debut novel, introduces newly minted homicide detective Sarah "Salt" Alt who on her first day in homicide, is assigned a cold-case murder of a blues musician whose death was first ruled an accidental drug overdose. Sarah's investigation takes her to unanticipated encounters ranging from Atlanta's homeless to its richest and most influential citizens.

You exemplify the old adage, 'Write what you know.' Tell us a bit about your career as a police officer.
I'd always been interested in police work, so after graduate school, I began working as a civilian in the Atlanta Police Department's Psychological Services Unit. I admired the work the guys were doing on the streets, so I enrolled in the police academy and became a cop. For me, office work wasn't as much fun as street patrol. As a kid, my heroes were Hop-along Cassidy and the Lone Ranger; and I'm a fan of Joseph Wambaugh and loved Hill Street Blues. I guess you could say I've always loved action.

I started out as a beat cop in a one-man car, not like on TV where the partners ride together. For about five years, I worked on evening watch in a densely populated housing project. It was pretty exciting and I learned how to do police work the smart way. I learned it was important to really know the people amongst whom I was working. They might have become the very people who would have one day saved my life.

I'd taken advanced training in crisis negotiating and was on-call twenty-four hours a day. In addition to hostage situations, I was called out for jumpers, suicide threats, domestic disputes, and all sorts of crisis negotiations.

I was promoted to detective and because I had close ties to the neighborhood, was placed in homicide. I worked in that capacity for about five years and was then promoted to the position of sector sergeant, and then went into Special Victims as a detective sergeant dealing primarily with crimes against children. After that assignment, I became a lieutenant on special projects involving outreach to the homeless and training officers to de-escalate tension in the mentally ill.

As a woman police officer, what challenges did you face?
There were some colleagues who were insensitive, but I never faced overt problems or discrimination. I suppose there were a few officers who were chauvinistic or sexist, but because I was working in a minority-majority city, many of the pathways to rectifying discrimination were already in place.

There were some subtle instances of unintentional insensitivity. For example, when I first went out as a uniformed officer to a rough part of the city, my sector sergeant would get the call and ask me to stand by to wait for backup, if there'd been mention of guns on the call. He didn't do that with the men. I understood he was trying to be protective, but his doing so made me different from everyone else. One night, I asked him, 'If you were the only black guy out there and your sergeant was telling you to wait for backup, how would you feel about that?' He looked at me and said, 'I get it.' From then on, he stopped doing that. You have to have a thick skin when you're dealing with cops, and I wasn't very vulnerable; but I'm sure there were other women who were.

Sarah 'Salt' Alt is an interesting character. Tell us a bit about her.
She's very intense and very committed to the job and to the community she serves. She feels somewhat of a debt because she's partly exploring the legacy of slavery and the culture of poverty in Atlanta. Her father committed suicide, and one of the mysteries she's exploring is "why", and how come he did it on her tenth birthday.

There's a great deal about blues music in Out of the Blues. Tell us about that.
I'm a fan of the blues and of Atlanta's history. A section of the city was a center of black culture. Atlanta was a city to which musicians came to play music, including black musicians on the blues circuit. As a white southerner, I grew up being segregated from such wonderful music in my midst. My early years were spent in Tennessee, where I loved listening to country music, church music and Elvis Presley, but I had no idea about the influence of blues on much of the music I enjoyed. My writing about the blues was my own exploration of how it influenced our culture. Blues, after all, is this country's only indigenous art form.

After a long career as a police officer, you've written your first novel. Did you always want to write?
I've been a life-long voracious reader. As a child, I always had my nose in a book. My interest in adventure-seeking and police procedural novels kicked in when I read Joseph Wanbaugh's books. I never thought I would someday write.

In 2001, I was working as a Crime Victims sergeant. My duty was to come in each morning and read reports about children who were either sexually or physically abused, or who had runaway, or were neglected. I would assign cases to my detectives. Daily, I was reading about tragedies. My marriage was falling apart; and at that time, my best friend of thirty years died. After these events, I realized I needed an outlet, so I signed up for a creative writing course at the local fine arts center. Our first assignment was to describe following someone. I had a leg up on that one. (Laughter). I had a flashback to an incident that happened while I was on patrol. My fictional counterpart came to populate Out of the Blues. So I began writing.

How did you get Out of the Blues published?
I have a friend, a respected local journalist, who knows Nat Sobel, an agent. We were introduced, and Nat and I worked on the manuscript for about a year. He sent it out and it was accepted by the publisher.

What's the most important lesson you've learned about writing?
I'm still learning lessons about writing. For me, the most important thing is to show up at my desk every morning. Nothing is going to happen unless I'm there ready to work. The muse may not be there, but I have to be there. On the days when it's just not working, I write a letter to myself about what I would like to have happen. Often, that turns into something worthwhile.

Have there been any surprises for you about the writing life?
I was thrilled the first time I experienced that magical zone when the words seemed to be coming through me rather than out of me. Having that happen is the supreme reward for a writer. It's the ultimate experience. Athletes experience it. I think anyone can experience that zone when they're doing what they feel passionate about.

What's coming next from Trudy Nan Boyce?
I'm working on two manuscripts involving 'Salt,' each one having more interaction with the community and her colleagues in homicide. And, there will be complications in both her personal life and with the community.

Congratulations on writing Out of the Blues, a novel described by Lisa Gardner as, 'A fresh, gritty debut. Boyce unveils one of the best new series' characters in ages, an Atlanta detective with a haunting past but complete dedication to working the streets. It's a book that combines fast-paced suspense with moving insights.'