Why is the sky blue (fig. 1)? Those who know (or think they know) will tell you that the color of the sky is caused by the process known as Rayleigh scattering: Air molecules scatter short wavelengths (blue and violet light) from the Sun more effectively than they scatter long wavelengths (red light). Consequently, the light of day is dominated by violet and blue light. At sunset this explanation continues: The Sun's light passes through a longer distance within the Earth's atmosphere, so that the blue light is completely scattered out and away from our line of sight, leaving only red and orange colors behind (fig. 2). 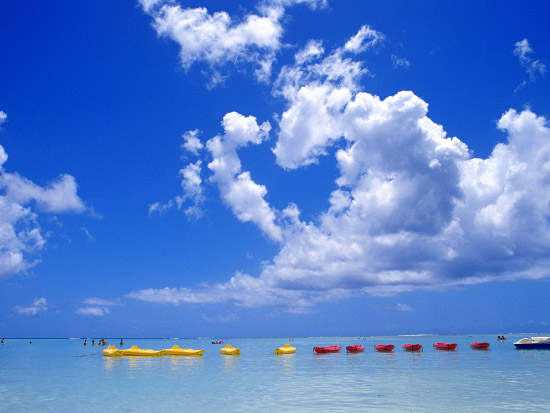 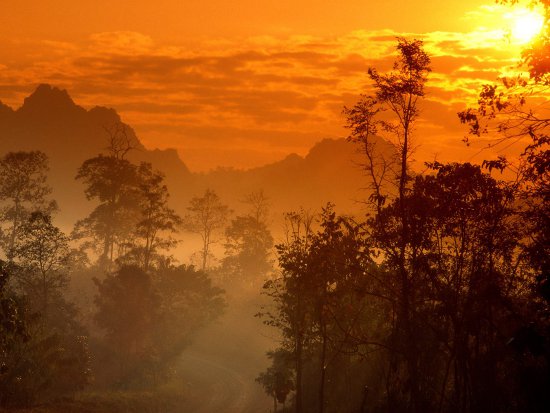 Although it is true that in the 1870s Lord Rayleigh mathematically showed that the probability of scatter by molecules is inversely proportional to the fourth power of the wavelength (implying that the shorter the wavelength of the light, the higher the probability of scattering), a few intriguing questions arise. First, mathematics aside, was Lord Rayleigh truly the first person to understand such a basic phenomenon as the blueness of the sky? Second, violet light has an even shorter wavelength than blue, so why isn't the sky violet? And third, were the skies on Earth always blue?

In answer to the first question, physicists tend to cite John Tyndall's 1859 experiments, where he discovered that when light passes through a fluid that contains small particles in suspension, the blue wavelengths are scattered more strongly than the red. However, Leonardo da Vinci actually anticipated Tyndall's results by more than 350 years! In his notebook, under "the color of the atmosphere," Leonardo wrote, "The blue which is seen in the atmosphere is not its own color, but it is caused by the heated moisture having evaporated into the most minute imperceptible particles, which the beams of solar rays attract and cause to seem luminous against the deep intense darkness." He then added, "As a further example of the color of the atmosphere, we may take the smoke produced by dry wood, for as it comes out of the chimneys it seems to be a pronounced blue when seen between the eye and a dark space..." We can forgive Leonardo for thinking that the scattering was done by water vapor rather than by molecules of oxygen and nitrogen -- even Tyndall and Rayleigh believed that -- but there is no doubt that da Vinci had understood the basic phenomenon.

Now, why isn't the sky violet? It turns out that this has more to do with the responsiveness of the human visual system. The human eye is sensitive to light with wavelengths between roughly 380 (violet) and 740 (red) nanometers (a nanometer is one billionth of a meter). The human retina contains three types of cones for detecting color -- for long, medium, and short wavelengths -- but with overlapping wavelength ranges, so that two different spectra of light could cause a similar response. For instance, the same set of cones that react to the narrow range of wavelengths that one might call "pure" yellow would also respond to a superposition of red and green light. In 2005 engineer Glenn Smith of Georgia Tech showed that in our eyes, the sky's combination of violet and blue elicits the same response as pure blue plus white light (the combination of all the colors). So the blue appearance of the sky is, one might say, in the eye of the beholder!

Finally, was the sky always blue? Probably not. Earth's atmosphere is thought to have originally been methane-rich, which would have given the sky an orange cast. Only with the rise of oxygen levels, first between 2.5 and 2 billion years ago, and then in a second stage between 1 billion and 540 million years ago, did the skies become blue.

Interestingly, the Hubble and Spitzer space telescopes are using (and the upcoming James Webb space telescope will use) the passage of starlight through the atmosphere of orbiting extrasolar planets to determine the composition of these atmospheres. So even such a common fact -- that the sky is blue -- can have intriguing ramifications for disciplines ranging from the history of science and the Earth, through human physiology, to future searches for life.