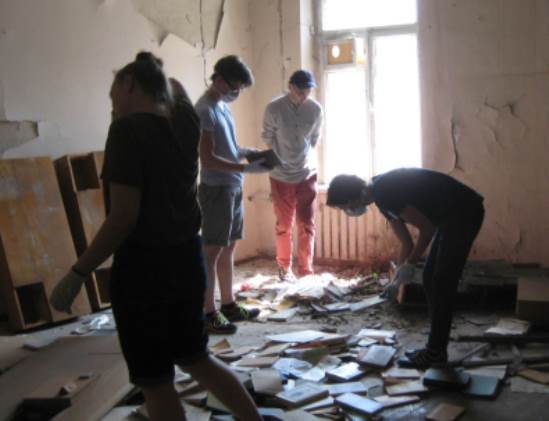 One recent Monday, a crew of young people equipped with brooms and flashlights made their way into a derelict building on narrow, curving Zemaitijos Street in Vilnius, Lithuania.

Wearing masks and blue jeans, the volunteers, who are members of a group called Vardai ("names" in Lithuanian), aimed not only to haul away dust and debris but to advance a larger mission: "to commemorate Holocaust victims and help revive our collective memory."

During the Holocaust years, Zemaitijos Street was located within the confines of the Vilna ghetto, where 70,000 Jews were confined under horrific conditions of overcrowding, hunger, and terror.

The gracious stucco building served as the ghetto library. It contained 45,000 books, including those from the collection of prewar Jewish library that had occupied the site before the war, as well as others from Jewish homes and institutions plundered by Nazi forces.

"There were sometimes as many as seven hundred readers in a day," remembered Rachel Margolis in her book, A Partisan from Vilna. Margolis worked in the library alongside the director, Herman Kruk.

"I remember the tremendous line of readers on the stairway," she wrote, "as we scurried from shelf to shelf as quickly as monkeys to get them their books. Tired, hungry people, penned up, sweltering, losing themselves in a book."

The library building served as an important cultural center for the ghetto - and also a center of armed resistance. In the basement, members of the United Partisan Organization constructed a soundproof room for testing weapons they had managed to smuggle in from outside.

Only 600 ghetto residents survived the war. As for the library's holdings, they became part of the collection of the Lithuanian National Library, which has continued to preserve them. For a short time, the building became the site of a small Jewish museum founded by survivors. Later, it housed a music school. In recent years it was inhabited by squatters.

Today, the building is empty. The roof is leaking, the walls are marred by graffiti, and the floors are covered with trash.

But as Lithuania prepares to commemorate the anniversary of the ghetto liquidation that took place on September 23, 1943, members of Vardai hope that the building, now owned by the Vilna Gaon Jewish State Museum, will once more become a cultural center - a place where Lithuanian's magnificent Jewish cultural heritage can be remembered, mourned, and honored.

Vardai's first public initiative took place four years ago. To mark the ghetto anniversary, the group led a solemn ceremony inside a Vilnius church. Lithuanians stood in line, waiting to join in reading aloud, one by one, the names of tens of thousands of ghetto residents.

Since then, the public readings have been held every year on the ghetto anniversary. "By reading the names one by one," said Vardai member Audra Cepkauskaite, "we make the Holocaust personal. The informality is important. Anyone can come. Together with others, we express our grief."

This year, the names ceremony will take place not only in Vilnius but in several other Lithuanian cities.

Other events will also mark the anniversary. The Lithuanian Parliament will convene a special meeting to commemorate the victims of the Siauliai (Shavl) and Kaunas (Kovno) ghettos. A ceremony will be held at Paneriai (Ponar), the mass murder site near Vilnius.

"Lithuanian Jews were, are, and will be part of Lithuania's history," said Faina Kukliansky, chair of the Jewish Community of Lithuania. Although only 4,000 Jews currently live in Lithuania, "our hope is that these events will bring together people of different generations and will aid in the search for our relationship towards what may be painful but which is for all of us a shared part of our identity."

Anti-Semitism is by no means absent in Lithuania today. Several ongoing projects seek to combat intolerance, connect Lithuanians to their nation's Jewish heritage, and educate citizens about the Holocaust.

At the Jewish Museum, 48 panels present the stories of children who survived the Holocaust and 20 panels telling the stories of their Lithuanian rescuers of Jews.

Lithuanian teachers are encouraged to join a national network of tolerance centers. The Vilnius Yiddish Institute, at Vilnius University, teaches the Yiddish language and Jewish culture. And the Sholom Aleichem Jewish school in Vilnius, headed by principal Misha Jakobas, has an enrollment of more than 300 students and helps to keep Jewish history alive.

Yitzhak Rudashevski, a child resident of the Vilna ghetto, was a devoted patron of the ghetto library. "Reading books in the ghetto is the biggest treat there is," he wrote in his diary, which was discovered and published after the war. "Books link us to freedom; books connect us to the world."

The young Lithuanians cleaning up the old ghetto library are hoping that, in time, a building that once offered a wider world to trapped ghetto residents will become a place that opens minds and hearts.